A rickshaw drives into a flooded street next to temporary housing during a winter storm in the southern Gaza Strip town of Khan Younis on January 25, 2016. (Photo: AFP / Said Khatib)

Ramallah, May 16, 2016—Thousands of Gazans took to the streets on May 15 to commemorate the Nakba, or “catastrophe,” which marks 68 years of Palestinian displacement and dispossession, at a time when “home” is a particularly heavy word. Since Israel’s 50-day strike on Gaza nearly two years ago, many Palestinian families, whose houses were reduced to rubble or otherwise rendered uninhabitable, continue to wait for new homes.

According to a recent UN report, in addition to the heavy human death toll, the 2014 war destroyed an “unprecedented” 18,000 Palestinian homes and partially damaged a further 153,200 housing units. The devastation fueled a rapid spike in internal displacement as Gazans, unable to leave the Strip, were forced to hunt for shelter. “At the height of the most recent escalation in July-August 2014, nearly 500,000 people, 28 percent of the population, were displaced from their homes,” the report states.

At the time of the UN survey, which ended on December 2015, 90,000 people in Gaza were still living in protracted displacement. Of this number, 23 percent were residing in damaged homes and 7.5 percent were living in tents, pre-fabricated, or makeshift shelters.

While the UN has worked to repair and reconstruct homes with available funds, a vast funding gap of $473 million is forcing internally displaced persons (IDP) to live in insecure and temporary shelters such as the UN-provided metal and wooden static caravans.

Israel’s 9-year blockade on Gaza has also delayed reconstruction by restricting building materials and obligating aid organizations to spend part of their budgets on monitoring requirements. The April 2016 report states: “[I]n 2015 alone, additional staffing, transit and logistical costs resulting from Israeli requirements regarding access and monitoring of all UNRWA imports into the Gaza Strip amounted to almost US$ 8.6 million. This is equivalent to the cost of building six UNRWA schools.”

For those awaiting reconstruction and residing in caravans, which were not designed for long-term use, living conditions have been cramped at their best and life-threatening at their worst. Children, who made up 44,000 of IDP at the time of survey, are especially at risk.

In September 2015 and March 2016, DCIP interviewed children and parents living in caravan communities in Beit Hanoun, northern Gaza and Khan Younis, southern Gaza, about their experiences. They described wide-ranging dangers they had faced such as hunger, electric shocks and illness. When asked to describe happiness, one boy said, “Happiness is a concrete house.” Below are excerpts from their interviews. 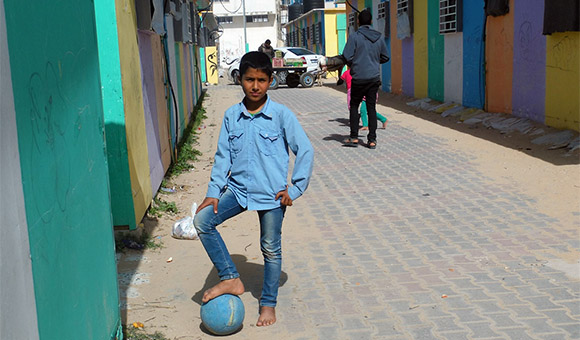 “Before the war, we had a large apartment where we felt comfortable. We had our own belongings and a closet where we kept our clothes. We had toys, me and my siblings. My parents had their own bedroom, and we had beds and sofas. We were alive, and people used to come visit us and I used to invite my friends. But all that has been ruined with the demolition of our flat. Today, we have fewer clothes, less blankets, and mattresses. We have been living here for a while, but we have never felt home.”

“It was during summer when we first moved in. It was so hot that we had to take showers until we ran out of water ... my father set up a small awning in front of the caravan so we could stay there when it is hot. And sometimes we sleep there. I think I lost consciousness about three times because it was so hot and my parents had to take me to the hospital.”

“A concrete house is better. The caravan is not good. It is really cold in winter and really hot in summer. We have been told that they would rebuild our home, but we are still waiting.” 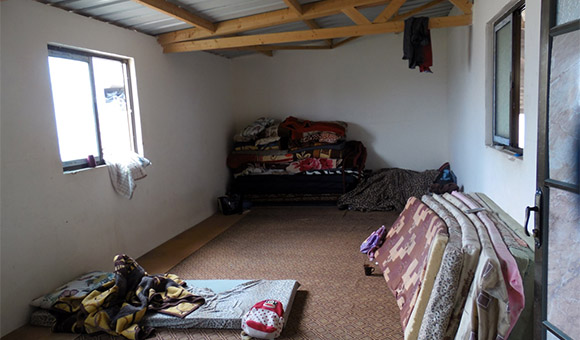 “But the thing is that my family was supposed to stay there for a couple of days, and the weather was getting better and felt like spring.”

“At approximately 9 p.m. on Monday, March 28, 2016, my wife and the children left the house and headed to her parents' caravan. At around 11 p.m., I called her and she told me that the children were safe, fed and sleeping.”

“I woke at around 6 a.m. to a phone call from my wife's brother, telling me that my son H. was not breathing ... When I got there, I held H. in my arms, but he was really cold and his face had turned blue. I tried to wake him up, but he did not wake up. So I took him in the car and rushed him to Mubarak hospital.”

“When I arrived at the hospital, I put him on the bed, and a doctor examined him. A few minutes later, he told me that H. had arrived dead due to extreme cold.”

“If the Israeli army had not destroyed my in-laws' house, my son H. would have been alive ... His body temperature was 3.4 degrees [Celsius, 38 Fahrenheit] when he arrived at the hospital. He was frozen. Caravans are not made for humans.” 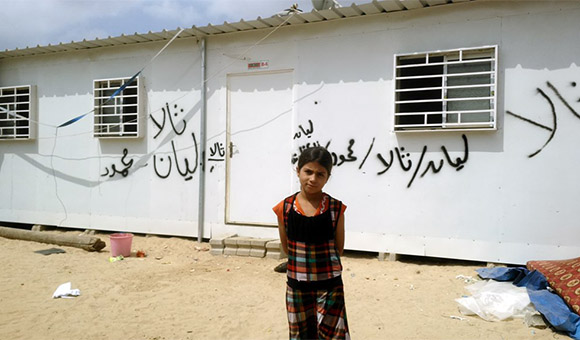 “I live in a caravan, which is a house made of tin, near Beit Hanoun hospital.”

“Before the Israeli war on Gaza in 2014, I lived with my family in our own house in Beit Hanoun, north Gaza Strip. But when the war started, we had to evacuate the house and take shelter at Halab School in Sheikh Zayed area following the Israeli army incursion of Beit Hanoun. We stayed at the school until the war ended and then returned to the house, but it was demolished and we lost everything; our clothes, our furniture, and our toys.”

“The school year 2014/2015 began while we were still living at [Halab] school ... I was in the third grade at Beit Hanoun Co-Ed Primary School, which is run by UNRWA, and is about two kilometers [1.24 miles] from Halab School ... I had to walk for 40 minutes every day to get to school. I used to leave at around 5:30 a.m. to make it before the school bell.”

“In winter, I had to walk to school as usual, and sometimes it rained and my clothes got soaked. Sometimes, it would get really cold, and I would freeze.”

“Before the war, I used to go to school near the house, and the road was not tough. But today, my teachers beat me a lot when I am late for school. They force me to take off my shoes and beat me on my feet. I always do my best to leave the caravan really early in the morning, but it is too far, and sometimes I am late.” 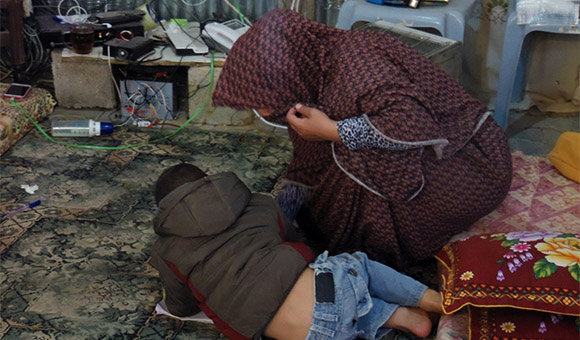 “Our life has changed since we began living in the caravan. Before that, we lived in our own house and had a normal life. We slept whenever we wanted and played as much as we could, and we had our friends come over. My school was close to the house and I used to go there without any problems. My mother would sit with me in the room and help me study. The room was quiet and was not too hot or too cold. I used to play in the house or in the street with my cousins and I had so much fun.”

“But I stopped having fun since we have lived here in the caravan. I cannot sleep because of the noise. I cannot study either. If it is hot, I do not know where to go. If it is cold, I freeze. Everything is bad now.”

“I come from school and feel like going to bed, but I cannot when it is cold and it is raining. Instead of that, I find myself helping my mother stop the water from leaking into the caravan by putting cans out to collect it ... then we have to lift our belongings and the furniture so they would not sink.”

“I remember my neighbors [in the caravan settlement] once caught a scorpion and killed it. I am scared and sometimes I dream of finding a scorpion.” 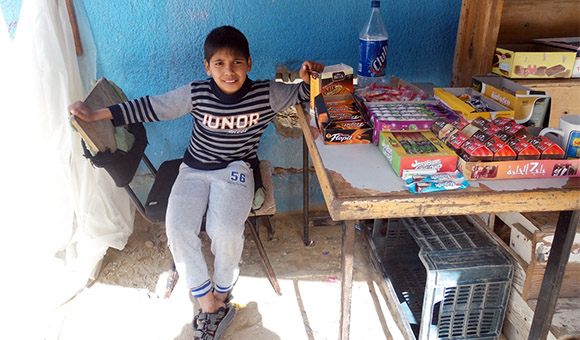 “My father is a municipal laborer and has some financial problems, so we had to set up a booth in the street. My brothers and I take turns in taking care of it. I usually stay three hours, at least, every day and sell things to bring food to my family.”

“The floor collapsed in the first winter we lived in the caravan. Rainwater used to leak inside through the ceiling. The floor was made of wood and was covered with leather, but the wood broke and the floor is no longer flat. We have mice, insects, and cockroaches coming in through the cracks. Living in a caravan means you get disgusted. You find cockroaches in your food.”

“I am ill as I have kidney swelling, impaired hearing, gland and growth issues. I need to rest and to not get stressed. If I play with other children, I get worried they may slam into me and hurt me, so I do not play. There is no place where I can play and protect myself at the same time.”

“The doctor says I must not get upset, but I am upset because of our living conditions ... I need medication, but my father has no money, so sometimes I have to put up with the pain.”

“Happiness is living in a concrete house and getting together with my family members like we used to.” 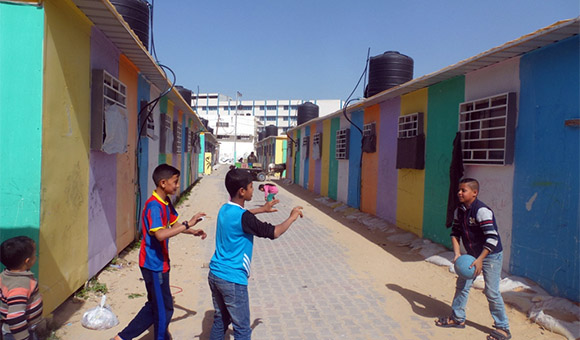 “Living in a caravan was much better than living in the school, or at least that is what we thought at the time. The caravan is really small, consisting of two rooms, a kitchen and a bathroom.”

“We could not sleep at night because it was freezing. How could I sleep when I am shaking? Also, the plaster in the walls soaked in water and began falling off. The floor is made of weak plywood and it got soaked in water and collapsed. It is disintegrating and you need to be careful and watch your steps because it could collapse at any time.”

“These were not the only problems in winter. We had a short circuit during the winter and the electricity went off in all the caravans because there was no a ground conductor. So, you could get a shock just by touching the metal walls of the caravan. Even the sockets burned because of the short circuit. And I remember I got shocked many times because of this. My little brother Abdullah got shocked once and lost consciousness from the electricity.” 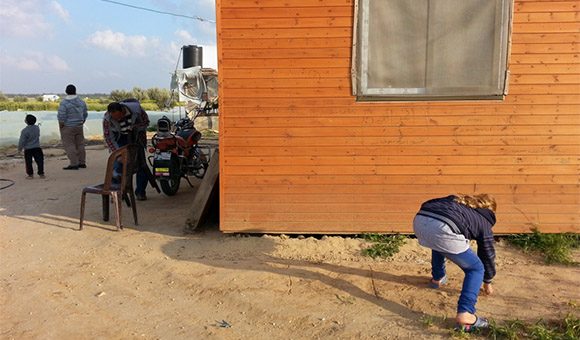 “Our house was destroyed in the war on Gaza two years ago. We were living in a two-story concrete house with my uncle's family in Al-Radwan area, but we had to flee during the war when the Israeli army dropped fliers, ordering us to evacuate the house. At first, we did not evacuate the house, but then the bombardment started. So, we fled to a relative’s house where we lived in the basement.”

“The bombardment continued and we became trapped in the basement following the Israeli incursion of Khuzaa. Then, we heard the news about a truce to evacuate the area, so we fled while Israeli drone planes were circling in the sky and photographing us, while we were running in the streets.”

“We took shelter at the UNRWA school in Khan Younis, along with many people who had fled their homes. We stayed there throughout the war ... I was so terrified during the war that my hair began falling and my father took me to the doctor, and the doctor said it was because of the trauma.”

“I wish we could rebuild our house so I could go back to play with my friends in my old neighborhood. I wish we could leave this life behind and have a normal life in our own house.”