A Palestinian child sits at a demolished house in Qalandia refugee camp on July 4, 2016, which belonged to a Palestinian assailant involved in a fatal attack on two Israelis in December 2015. (Photo: AFP / Abbas Momani)

Ramallah, July 14, 2016—At dawn on June 11, a large number of Israeli soldiers and military vehicles invaded the Beit Amra village, which lies east of Yatta and south of the West Bank city of Hebron. They surrounded and demolished the family home of a teenager accused of fatally stabbing an Israeli settler in January.

“Israeli forces blew up the front door of my two-storey house, stormed the first floor and locked me in one room along with my wife and my son,” the teenager’s father, who wishes to remain anonymous, told Defense for Children International - Palestine. “[They] locked the rest of my family in another room.”

His son was arrested by the soldiers, who returned the following day and locked the family in a room while they measured the house. As they left, they handed the family a demolition order.

Though the case was taken up by Israeli human rights organization HaMoked, the army swept in and destroyed the house without warning before a resolution was reached. Such was the urgency with which Israeli forces moved in on the home, that the family was not able or allowed to remove their furniture and belongings. The demolition left the family of seven, of whom three are children, homeless during the Muslim holy month of Ramadan.

“We are currently living in a rented house in Beit Amra in difficult conditions — psychologically,  socially, and financially,” said the father.

Home demolitions are a trademark of the Israeli occupation of Palestine. The Israeli Committee Against House Demolitions reports that Israeli has demolished more than 48,000 Palestinian structures since 1967, of which 24,000 are estimated to be homes. In February, UN Special Coordinator, Nickolay Mladenov, reported to the UN Security Council that Israel is demolishing an average of 29 Palestinian structures per week since the start of 2016, three times the weekly average in 2015.

Israel demolishes Palestinians homes for a number of stated reasons, most often citing a lack of building permits, paperwork or infrastructure on the part of the homeowner. However, Israeli authorities refuse the majority of applications for building permits by Palestinians in Israeli-controlled Area C, which comprises 60 percent of the West Bank, forcing them to build homes without the necessary permits. These homes are under constant threat of demolition from the moment construction begins, and are often demolished with little notice.

The remaining 40 percent of the West Bank, designated as Areas A and B by the Oslo Accords, is under Palestinian civil control with shared Israeli-Palestinian security control in Area B. This land is almost entirely exhausted, leaving what little space remains very expensive to purchase.

Occasionally, homes are destroyed during concentrated Israeli military operations. In the summer of 2014, Israel’s 50-day military incursion in Gaza, Operation Protective Edge, destroyed 20,000 homes, leaving up to half a million people displaced. Roads, hospitals, and other essential infrastructure were also destroyed and damaged, including 244 schools, according to UNICEF. Of the 2,220 Palestinians killed, 547 were children.

Punitive demolitions are markedly different from other kinds of demolition or destruction of homes. Officially, Israeli authorities claim that punitive demolitions serve as an act of deterrence intended to stymie attacks on Israelis. If a potential perpetrator knows that their family will suffer as a result of their actions, Israel believes that they will be less likely to perpetrate a crime. However, the extent to which house demolitions are an effective deterrent is questionable, with some evidence demonstrating that demolitions can increase the odds of a violent incident.

It is the families, including the siblings, of suspected perpetrators who suffer the most from a home demolition. Israeli authorities do not spare a family based on financial situation, the number of dependent children or elderly relatives, or the ability of the family to find a new place to live. 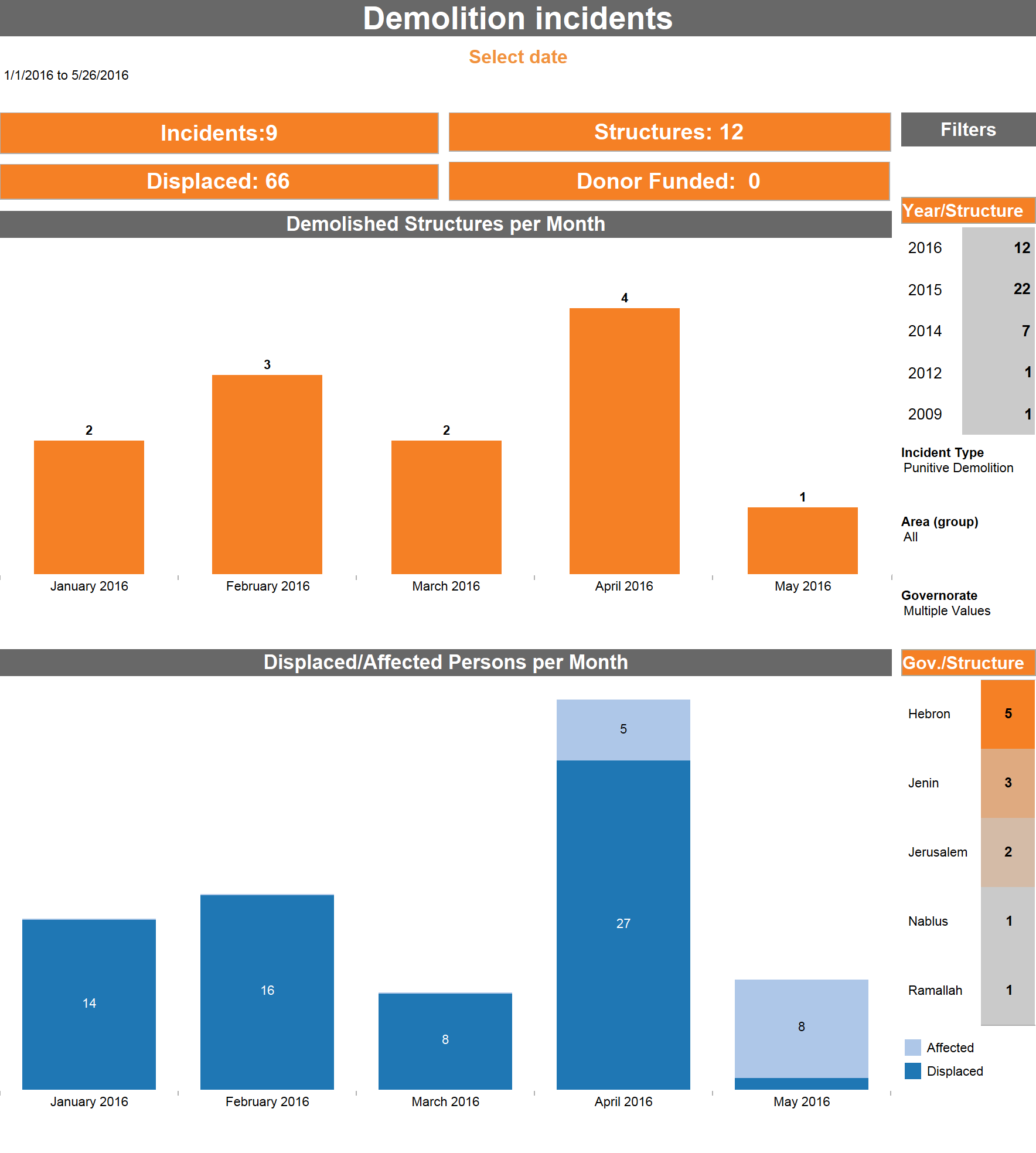 According to OCHA, Israel has demolished 21 homes in punitive actions since the start of 2016, displacing 100 people, including 35 children. In all of the recent testimonies about punitive demolitions that DCIP collected, the accused assailant had already been killed or jailed before the demolition.

Punitive demolitions function as an act of collective punishment against the families of suspects or perpetrators, and create insecurity in the surrounding community. Though Israeli authorities maintain that punitive demolitions are a means of achieving security, Israel does not demolish the homes of Israelis who have committed crimes against Palestinians, including Israeli terrorists, as part of its policy.

Mohammad G. is one of many who have seen their home destroyed under this policy. His son, Hussein G., 17, was gunned down in January of this year after allegedly committing a stabbing in the Beit Horon settlement, northwest of Jerusalem.

In April, HaMoked contacted Mohammad to tell him that a court had ordered the demolition of his home. Mohammad, who is a father of seven children, swiftly evacuated his family from their home in Qalandia refugee camp, located between Ramallah and Jerusalem, to a new rented property nearby.

“At around midnight on Wednesday, April 20, I heard through the media that the Israeli army forces were gathering near the camp in order to raid it. At around 12:15 a.m., they stormed the camp in large numbers. I was at the new house, but I was able to see my old flat from there.”

On the night of April 20, Israeli forces stormed the camp and began to demolish the home with sledgehammers and drills.

“After that, my older daughter and I visited the flat and found it in a bad mess. The Israeli army damaged all the walls, and there were holes everywhere. I felt bad because the occupation was trying to kill all the memories we had with my son, Hussein. It is true that we live in a new place now, but Hussein was not born here. He was born there in the flat, and we shared memories with him there, but occupation tried to kill those memories.”

Like Mohammad G., Mohammad K.’s son was gunned down by Israeli military forces in February under the pretext of carrying out an attack in Jerusalem. Soon after, Israeli forces descended on the family home in Qabatia, Jenin, which is home to seven people, including three minors. The house was measured and a demolition order soon followed. In the early hours of April 4, Israeli forces stormed the house and ordered the family to leave.

“My children were terrified and were crying,” says Mohammad. Soon after they evacuated, the bulldozer took down their home, leaving it uninhabitable.

“Demolitions such as this appear to serve no legal purpose,” said Ayed Abu Eqtaish, Accountability Program director at DCIP. “Israel believes it has the right to punish the families of Palestinians who are suspected of committing crimes on the basis of security and deterrence, denying other children in the family physical, psychological and financial stability and violating the sanctity and security of the home to the family.”