Ramallah, June 25, 2014—At 2 am on Nov. 14, 2013, Ruwaida Dar Khalil was warming a bottle for her baby son when she heard the screech of car tires outside her home in Sinjil in the occupied West Bank. She dismissed the noise as teenagers fooling around in their cars, and went back to feeding her son. The next thing she heard was the sound of her front door being kicked in.

Four adult male Israeli settlers were breaking into the tiny house that Ruwaida shares with her husband and five children. The men smashed windows with crowbars, before dousing the entrance in gasoline and setting it ablaze.

Smoke began filling the kitchen and Ruwaida realized that she had to get her family out.

“I woke up my husband and kids … [my children] were so scared, terrified … they were crying,” she said.

With the only escape route ablaze, Ruwaida and her husband, Khaled, had no option but to hide on the roof until help arrived.

Khaled and Ruwaida had left the United States to return to the West Bank with high hopes of raising their children in their homeland. They never anticipated that their home would be the target of four settler attacks.

Sinjil, the village they now live in with their three daughters and two sons, sits northeast of Ramallah. It is surrounded on three sides by an Israeli military base and two settlements. Soldiers are a common sight in the neighborhood, and Ruwaida finds it hard to understand why they didn’t come to help her family on the night of the attack.

“That night, there were Israeli police officers on the corner… and soldiers usually come to our place every night,” she said. “But… nobody showed up. Nobody cared.”

“Why didn’t anybody come to protect innocent children in this house?”

By the time Palestinian firefighters arrived and put out the fire, the roof had partially collapsed. All five of the children were treated for excessive smoke inhalation following the fire.

The next day, Khaled found the words “Regards from Eden, Revenge!” scrawled in spray paint on an outside wall. The message referred to Eden Attias, an Israeli soldier who had been stabbed to death on a bus in northern Israel by a Palestinian teenager a day earlier. The Israeli daily Haaretz reported that the arson may have been carried out to avenge his murder.

Acts of violence like the one carried out against the Dar Khalil family are known as “price tag” attacks – and they are on the rise. Between 2009 and 2011, “price tag” attacks increased 144 percent, according to the United Nations Office for Coordination of Human Affairs (OCHA).

“Price tag” attacks are carried out by fundamentalist Israeli settlers against Palestinians (and other populations or institutions they see as responsible) in retaliation for any action taken against the settlement enterprise in the West Bank. This can include actions initiated by the Israeli government and Israeli forces, for example demolition orders against unauthorized settlements. The Israeli government has condemned “price tag” attacks.

The Dar Khalil children continue to struggle with the after effects of the brutal attack.

They declined to speak to DCI-Palestine about the attack, but Khaled and Ruwaida described some of their problems.

Three-year-old Nisreen suffers from breathing difficulties, which started after the attack.

“She is always panting,” said Khaled. “The doctor told me she may have to have surgery.”

While Eman, 7, struggles to sleep at night and refuses to go to the bathroom alone.

“She won’t go take a sip of water, nothing, without me standing by her like a guard,” said Ruwaida. “She says, ‘No! No! No! The settlers are here.’ She always wakes up crying and thinks she heard settlers outside.”

Settlements on the rise

Since Israel occupied the West Bank in 1967, it has established some 125 settlements.

The Israeli human rights group B’Tselem estimates that there are over 515,000 Israelis living in these Jewish-only settlements. The settlements are woven throughout the occupied West Bank, including East Jerusalem, often dividing the cities, villages and refugee camps of the 2.65 million Palestinians who live there.

According to international law, Israel’s settlements in the West Bank are illegal. Israel, however, claims religious and historical right to the territory. It disputes that the Fourth Geneva Convention, which forbids an occupying power from transferring its civilians to the territory occupied, applies to the West Bank. Meanwhile, the settlements are growing. In 2013, Israeli construction in the West Bank, including East Jerusalem, increased by 130 percent compared with 2012, according to Israel’s Central Bureau of Statistics.

Stationed throughout the West Bank, Israeli soldiers, police and private security staff protect settler populations. Unlike Israeli civilians living across the Green Line, Israel’s pre-1967 boundary with the West Bank, many settlers carry government-issued arms. Ahead of the UN vote on Palestinian Authority statehood in September 2011, the Israeli government trained and further armed many settlers across the West Bank, according to Israeli daily newspaper Haaretz.

In this hyper-militarized environment, disproportionate physical and psychological violence is inflicted on Palestinian children.

Residents of Hebron, the most populous Palestinian city in the West Bank, complain of daily harassment from both Israeli soldiers and settlers. Between January 2012 and July 2013, OCHA estimates that 700 Palestinians were injured by Israeli soldiers or settlers in the city.

In a unique situation, the Old City now permanently hosts upwards of 3,000 Israeli soldiers and some 600 settlers in four settlements. Thousands of Palestinian shops have been closed and homes evacuated in this once-bustling area of the city.

The Abu Shamsiya family lives in a modest two-room house in the heart of the H2 area. Imad, his wife Faiza, and their three sons and two daughters are the frequent victims of both settler and military violence.

“Everyone in this house has been attacked before,” Imad, 40, told DCI-Palestine.

But Imad’s 9-year-old daughter Marwa and son Mohammad, 12, have both been the victims of particularly disturbing attacks.

In 2011, Marwa, then 7, was snatched by a group of settlers as she made her way home from school. They held her down and set her hair on fire. An Israeli soldier quickly intervened and put out the fire, but it was more than a year before Marwa was able to sleep through the night without waking up and screaming. 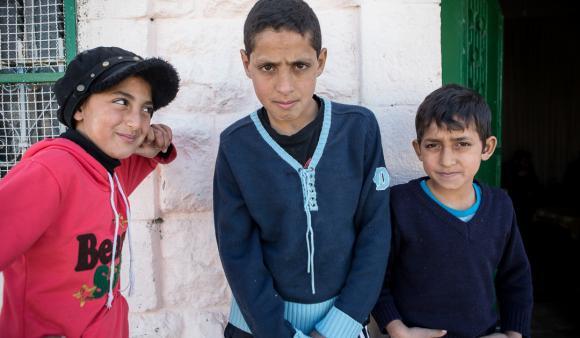 In October 2013, Mohammad was on his way to the store to fetch bread for his mother when he was stopped by an Israeli soldier. Mohammad told DCI-Palestine that the soldier asked him if he had recently thrown rocks, then he slapped Mohammad across the face twice and threatened to kill him.

“I went to tell my mom,” Mohammad said. “When my mom came to ask the soldier why (he hit me), he slammed her against the wall. When my dad went later, the soldier told him he hit me because he felt like it.”

Mohammad insists he is “used to the violence now,” but his mother, Faiza, told DCI-Palestine that all of her children are frightened at night.