Walaa A.Q. shows the damage to her home caused by Israeli shells on May 13, 2021. (Photo credit: DCIP / Mohammad Abu Rukbeh)

Ramallah, May 12, 2022—“I froze on the street because I was very terrified, while stones were being blown away, and thick smoke and dust filled the street,” 14-year-old Walaa A.Q. told Defense for Children International – Palestine. “I heard neighbors shouting and saying that my house had been bombed.”

Walaa is one of thousands of Palestinian children in the Gaza Strip who lived through the latest Israeli military offensive between May 10–21, 2021. The 11-day offensive resulted in the killing of 67 Palestinian children. Walaa recounted to DCIP the moment her neighborhood was shelled by Israeli forces on May 13, 2021.

“A very powerful explosion rocked the street and hit the eastern yard between my house and my uncle's house,” Walaa told DCIP. “Immediately after that, a second explosion hit the top floor of my house.”

Walaa, her parents, and four siblings, Bahaa, 19; Ayat, 18; Mohyedin, 12; and Fakhruddin, 9, lived together in Um An-Nasr, also known as Al-Qaraya Al-Badawiya (the Bedouin Village), north of Beit Lahiya in the Gaza Strip, about one and a half kilometers (about one mile) from the Israeli perimeter fence. Walaa’s two other brothers, Hussein and Diyaa, lived with their wives and children in other apartments in the same building. 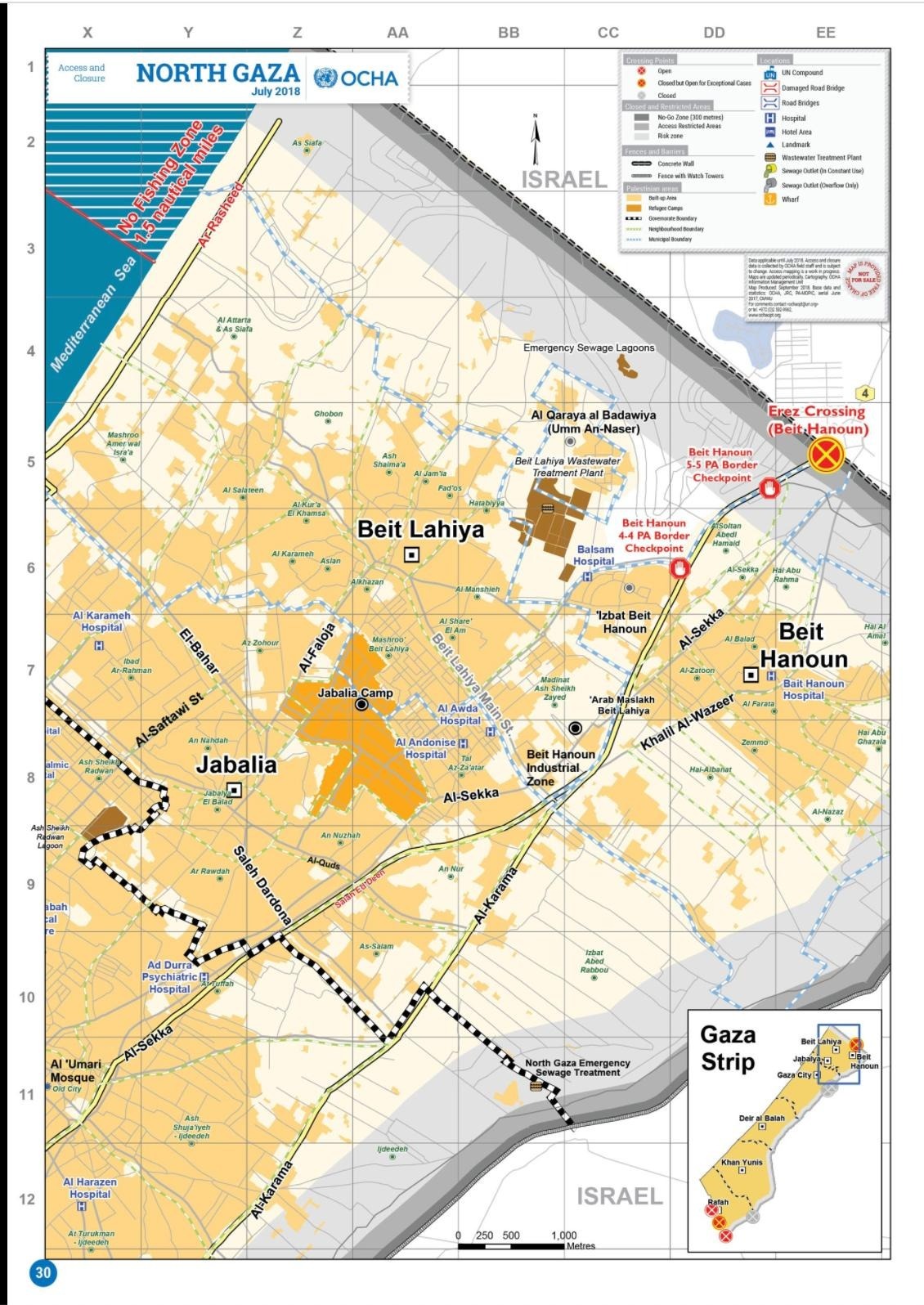 Despite the Israeli military offensive on the Gaza Strip, Walaa, like any other child, was impatiently waiting to celebrate Eid al-Fitr with her family, the holiday marking the end of the holy month of Ramadan. She was excited to wear her new clothes for the holiday. She had expected that the Israeli assault would stop during Eid.

On May 13, 2021, the first day of Eid, Walaa left her house and headed to play in the village. She had saved some money and was planning to buy ice cream from a store in nearby Jabalia refugee camp.

“I stayed on the street playing on the swings for hours and returned home in the afternoon to have lunch, but it was not ready yet because we had some guests over,” Walaa said. “When I left the house again, I saw a swing that my brother Mohyedin had set up and there were dozens of children from the neighborhood gathering around, so I went to play.”

Around 6 p.m., Mohyedin came back to remove the swing, but Walaa stayed to set it up again. While playing on the swing, she heard a powerful explosion rock the street and the eastern yard between her house and her uncle's house.

Immediately after that first explosion, a second shell struck the top floor of her house. Walaa froze, terrified, while rubble flew through the sky and thick smoke and dust filled the street.

“I heard neighbors shouting and saying that my house had been bombed,” Walaa recounted to DCIP. “I saw my five-year-old nephew, Mojahed, injured. His right leg was almost cut off and was lying strangely next to his body. He was screaming and holding on to me. His father, my brother Hussein, was also bleeding heavily from his neck.”

Israeli artillery shells continued to rain down on the neighborhood as Walaa rushed home, terrified and confused. She saw the walls of her house had collapsed, and there was broken glass and rubble everywhere. Artillery shells were still falling on her house. Walaa hid in the corner and closed her eyes. 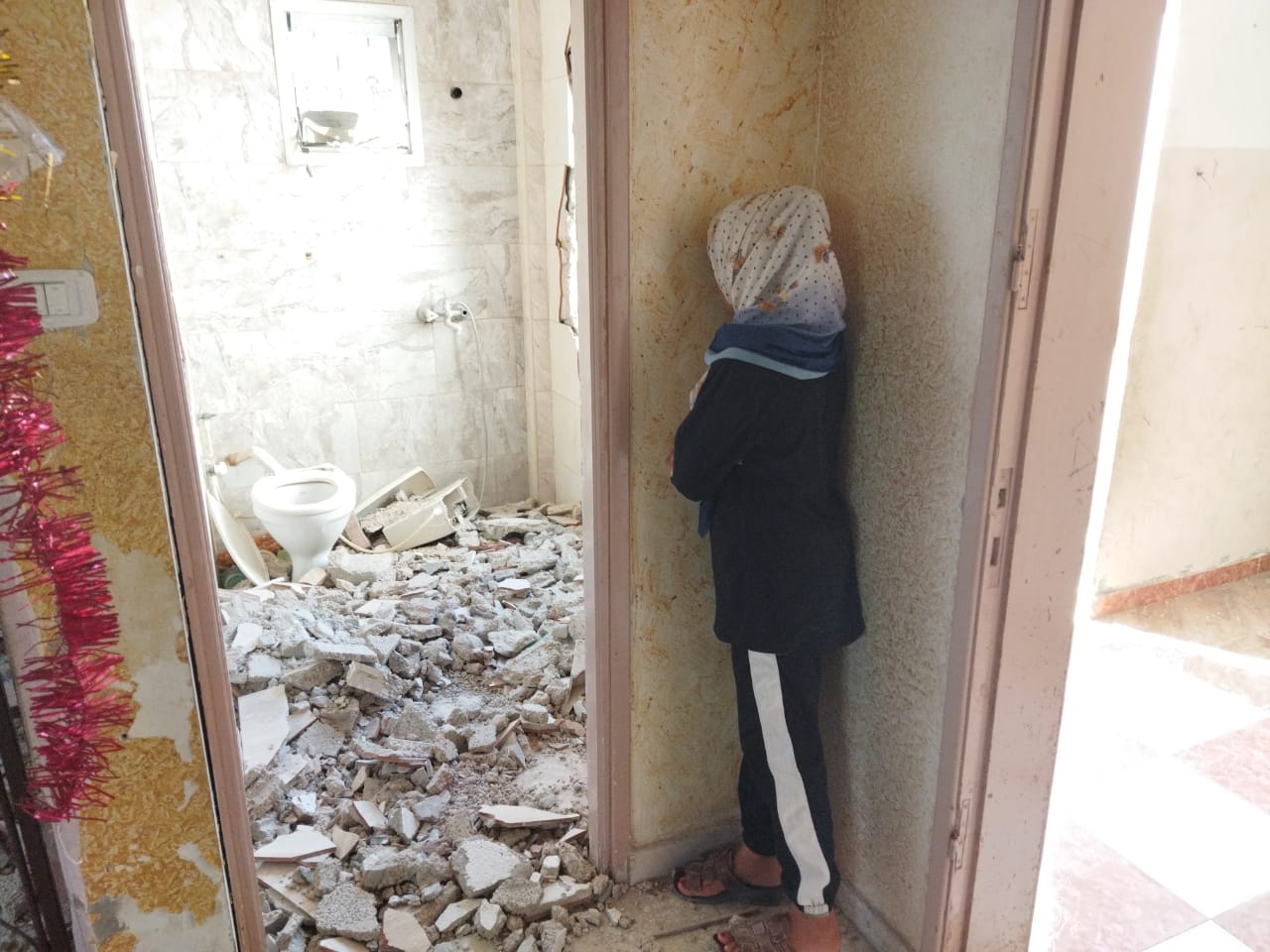 “I only wanted my mother,” she said.

Inside the house, Walaa’s baby niece, Hoor, was inside her crib, crying and covered with dust, with no one around. Walaa's mother came downstairs, screaming, along with Walaa's older brother, Diyaa, who was seriously injured and covered in blood and dust.

During the artillery shelling, Walaa's cousin, Sabreen, 27, was also seriously injured and when Walaa's mother ran to help her, another shell hit the yard and injured her mother’s arm.

“I was in a state of terror and shock. I rushed outside the house and looked at my uncle Nasser Abu Faris’ yard,” Walaa said. “It was filled with stones and dust, and there was blood and flesh on the walls.”

Without thinking, Walaa ran alone toward her uncle Nasser’s second house, hundreds of meters from her home. She entered the house, crying. She stayed there with her Uncle Nasser’s family until 9 p.m., when her uncle called and told them to immediately leave the house and go to the UNRWA-run schools in the Mashrou’ neighborhood in nearby Beit Lahiya. All the residents of Um An-Nasr had fled their homes and sought refuge there as a result of the heavy Israeli artillery shelling, he told them. 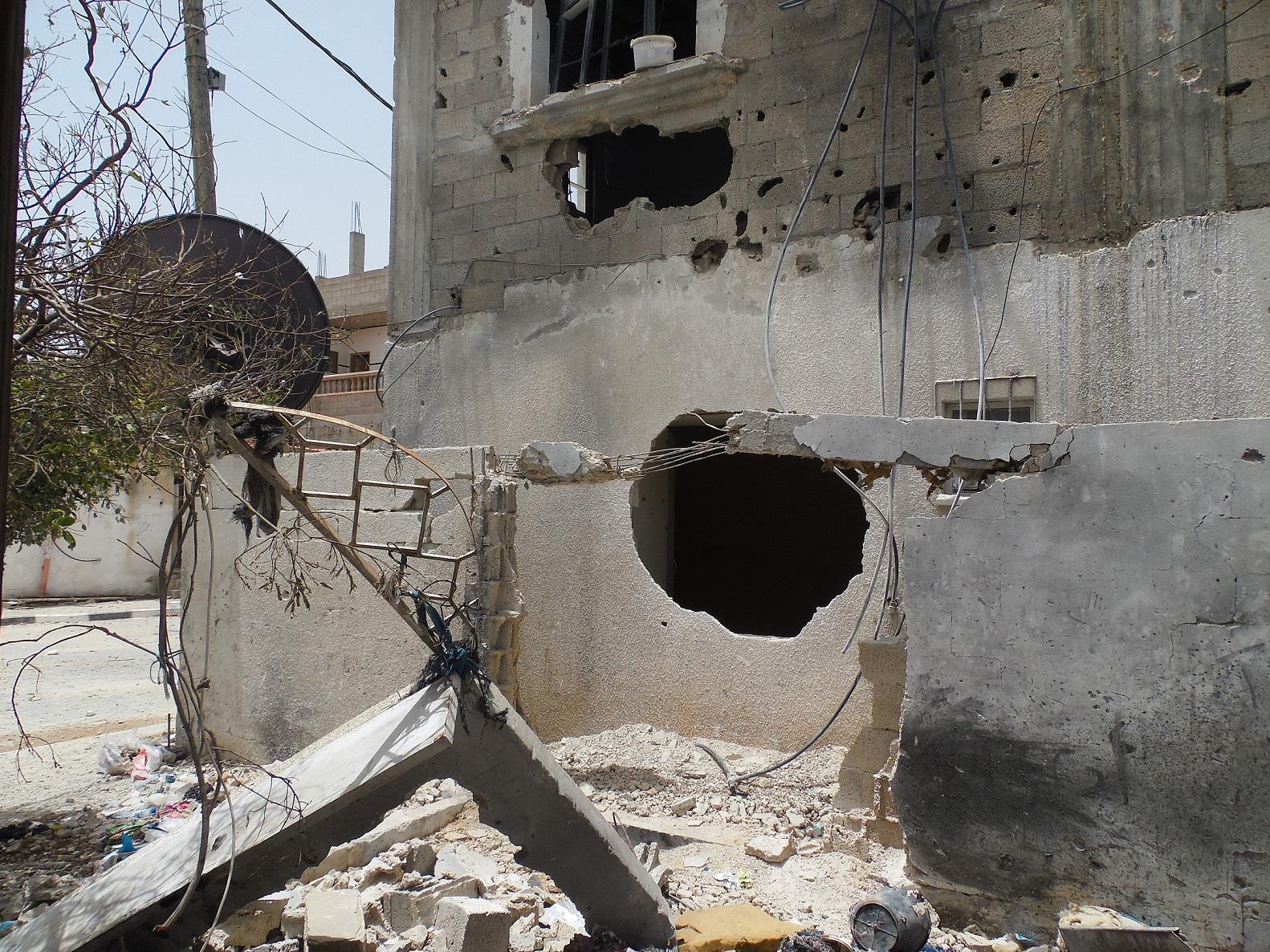 “We were running in the street in the middle of night, and it was completely dark because power was cut off,” Walaa said. “The artillery shelling was continuous, it was a moment of horror, we ran for so long and could not stop for a second. We were running in terror that I cannot describe.”

As they were running, a passing car stopped and drove them to UNRWA-run Khalifa Bin Zayed Al-Nahayan School in Beit Lahiya, where thousands of people were seeking shelter. When Walaa and her family arrived at the school, the UNRWA administration was not officially receiving any displaced people, Walaa told DCIP. Since people had no place to go, they entered the school trying to find a safe place to seek refuge.

During Israeli military offensives on the Gaza Strip, Palestinians have often sought refuge in UN facilities, hoping that the UN property would provide them with increased safety. Palestinians also sheltered in the Khalifa Bin Zayed Al-Nahayan School during Israel's military attack on Gaza in the summer 2014, under a Red Cross and UNRWA-coordinated effort.

Part 3 Sheltering in an UNRWA School

“[Inside the school,] it was very chaotic. Fights broke out, and people were hitting each other and there was shooting in the air because the place was so tight and not ready to receive such large numbers of people,” Walaa said.

Because so many displaced persons were seeking refuge at the school, people removed the tables and benches from the classrooms and put them in the schoolyard to make more space. Walaa and her relatives shared a 30 square meter (325 square feet) classroom with around 60 women and children. There were no mattresses or blankets to sit on, so people brought papers and posters and spread them on the floor so they could sit on them.

During her stay at the school that first night, Walaa's neighbors took care of her. She still did not know what had happened to her immediate family since she had run to her uncle’s seeking shelter. She feared they were dead because none of them were at the school.

The next morning, Walaa's cousin took her from the school and brought her to the Indonesian hospital in Jabalia to visit her family. At the hospital, she learned that her mother sustained an arm injury, and her five-year-old nephew, Mojahed, lost his right leg below the knee after being hit by a shell fragment. She was unable to visit her older brothers; Diyaa, 28, was in surgery, and 31-year-old Hussein, Mojahed’s father, was in Al-Shifa hospital in Gaza City with a serious neck injury.

While she was visiting her mother in the hospital, Walaa learned that six people, including two children, had been killed in the artillery shelling of the neighborhood, four of whom were her cousins: sisters Fawziya Nasser Mohammad Abu Fares, 17; Nisreen, 26; Sabreen, 27; and Sabreen’s son, nine-month old Mohammad Salameh Mohammad Abu Dayyeh. Walaa’s neighbors Ni'ma Abu Ayyash, 47, and Hashem Al-Zghaibi, 22, were killed, too. Dozens of children were wounded in the shelling, including three children whose injuries were so severe they were transferred for treatment in Egypt, according to documentation collected by DCIP.

The effects of high-explosive artillery shells cannot be limited as required by international law. Shelling in close proximity to civilians or civilian structures constitutes an indiscriminate attack, is prohibited by international humanitarian law, and amounts to  a war crime.

Israeli forces shelled Um An-Nasr in an effort intended to mislead Palestinian armed groups, including Hamas, that Israeli forces were launching a ground invasion of the Gaza Strip, Haaretz reported. Residents in the area were not advised to leave their homes, nor were they warned in advance of the attack, according to Haaretz. 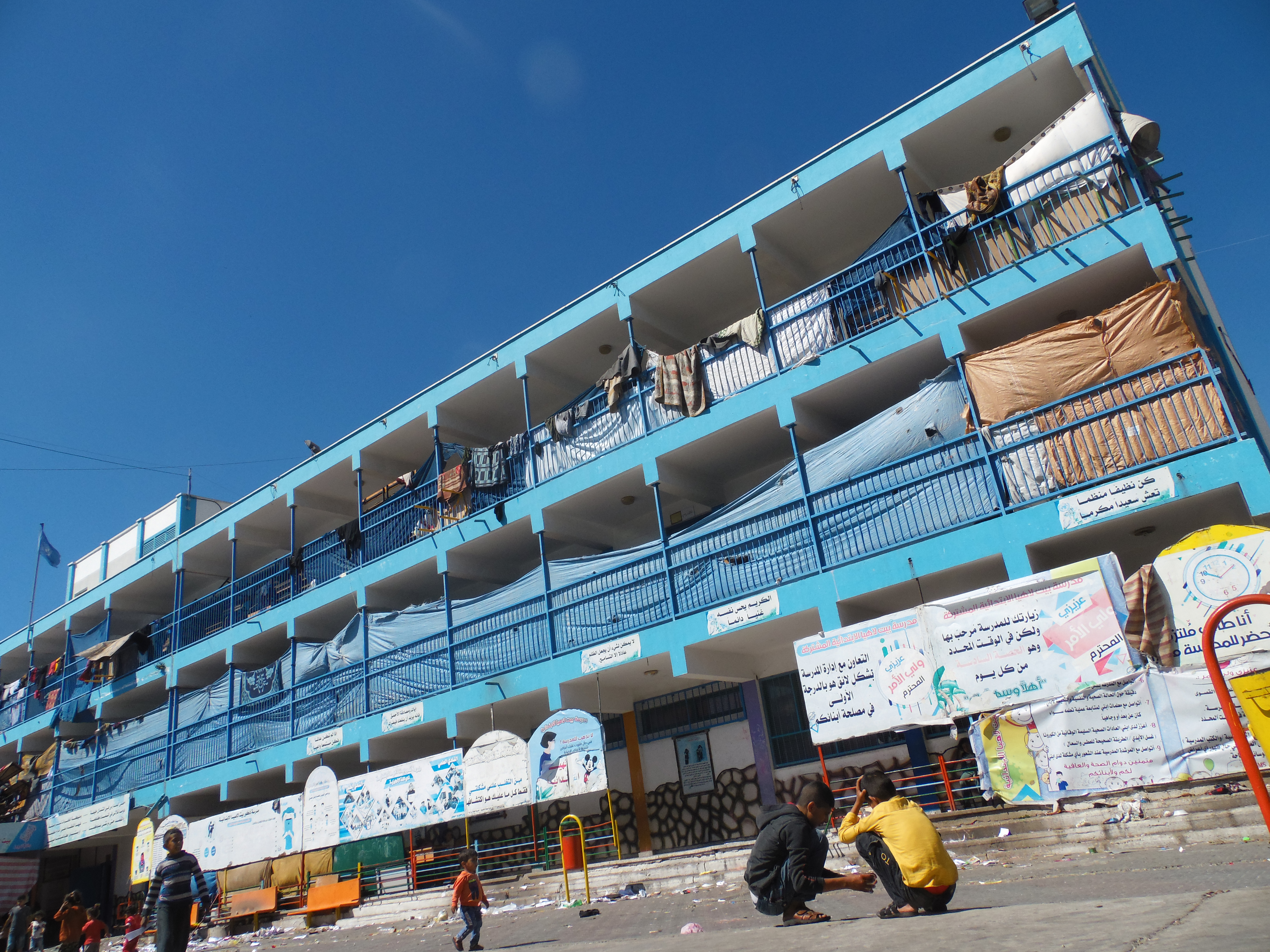 After the hospital visit, Walaa and her brothers returned to Khalifa Bin Zayed Al-Nahayan School where there were around 5,000 internally displaced persons seeking refuge. At the height of the escalation of violence, 113,000 Palestinians in Gaza sought shelter at UN facilities or with host families, the United Nations Office for the Coordination of Humanitarian Aid (UN OCHA) reported.

The conditions at the UN school were extremely difficult. People did not have adequate food or water and were so desperate that they drank water from bathroom faucets. Even that water ran out quickly because of the number of people there. Over 96 percent of the water from the aquifer beneath the Gaza Strip is unsafe to drink due to over-pumping and wastewater contamination, according to B’Tselem.  As a result, most Palestinians in Gaza do not drink from their faucets and buy desalinated water from private vendors.

Walaa and her brothers then moved to another UNRWA school in Jabalia refugee camp. There were fewer people, but the conditions were not much better than the school in Beit Lahiya. They shared the library with around 30 women and children until the end of the Israeli military offensive, which lasted another seven days.

Part 4 After the ceasefire

As soon as the ceasefire was announced on May 21, 2021, most families returned home. Walaa and her family visited their home the day after the ceasefire took effect, and found it destroyed.

They returned to the school in Jabalia refugee camp and stayed there for almost two months. Walaa helped her sister-in-law take care of her siblings because her mother had accompanied her nephew, Mojahed, to Egypt for treatment.

Walaa told DCIP that they never had proper showers and they bathed in the bathrooms using the bidet or a teapot. Walaa’s nephews and nieces developed rashes on their bodies because of the lack of proper bathing facilities and required treatment at the UNRWA clinic.

The UNRWA school had no electricity while Walaa and her family were staying there.

“My sister Ayat, who was preparing for Tawjihi [highschool matriculation] exams, had to study by candlelight. One day, she fell asleep and the candle burned the curtains and the cupboard inside the classroom,” Walaa told DCIP. “We woke up to the smell of smoke that was filling the room, and the fire engines came and put out the fire. Ayat fainted and was rushed to the hospital.”

UNRWA investigated the incident and why Walaa’s family was still sheltering in the school. Once they verified that their house was destroyed, they agreed to give them money to rent a house.

Even now, Walaa has struggled to return to her usual routine.

“I often dream of a tank shell falling next to me, and I wake up terrified, and I cry a lot because of what I went through,” Walaa told DCIP. “I hate walking on our street because it reminds me of the incident, as the effects of destruction and shells are still visible in our house and the neighboring houses.”

“There are many scenes in my head that I cannot forget: when I entered the house and saw my brothers injured and bleeding; how I froze in my place; when I ran towards my uncle's house while the shells were falling everywhere and I couldn't hear people; the terrifying scene when I went out at night in the dark and the shells were falling, and I was covering my body with a blanket and everyone was screaming and terrified.”

News | Fatalities and Injuries | Right to a Childhood