Othman, 15, has been under house arrest for the past 11 months on suspicion of throwing stones.

Ramallah, December 11, 2014——While most house arrests last for a relatively short time, some, like 15-year-old Othman’s, continue for months. When a child is under house arrest, their family is subjected to twice-daily visits from Israeli soldiers, at any time of the day. This situation can impact severely on a child’s mental health.

Othman, 15, is sitting at the top of a narrow staircase in the front porch of his family’s home in the Old City, in Jerusalem. He almost never smiles or laughs, and he doesn't speak much. He has been under house arrest for the past 11 months, during which time he was only able to leave the house occasionally with his mother or father. Recently, he has been allowed to go to school accompanied by a parent. “That helps. A little bit,” he says.

Othman was arrested when he was 14, along with his then 16-year-old brother, Obaid, on November 25, 2013. Israeli soldiers came to the family’s house at dawn and took both boys to the Mascobiyya detention center, where they were interrogated. Obaid remains in detention; the boys have not seen each other since their arrest.

The boys’ father says that he hadn't realized how traumatic the interrogation had been for his younger son. “He didn't speak about it at first, so we didn't know. It was only a few months later that we found out that the interrogators were physically violent, and threatened to rape him. He was by himself, so no one knew how bad it was.”

Othman is not alone in this experience. According to the Palestinian prisoners’ rights group Addameer, a spate of interrogations followed by house arrests were recorded over the summer, all involving children from East Jerusalem and the Old City. Between June and September 2014, at least 26 children were ordered to remain under house arrest for periods ranging between one and three weeks. Most were in their mid-teens, but the youngest child was just 12 years old.

While most house arrests last for a relatively short time, some, like Othman’s, continue for months. When a child is under house arrest, their family is subjected to twice-daily visits from Israeli soldiers, at any time of the day, to verify that the child is present in the house. This situation can impact severely on a child’s mental health.

“The longer the house arrest lasts, the greater the psychological impact,” says Hassan Faraj, a psychologist working with the charity Medecins Sans Frontieres. “The family must play the role of prison warden and parents at the same time. It creates a very difficult situation.” As well as this, Faraj says, “the child and his family are in a permanent state of alert because they don’t know when police will arrive in the house.”

In the cases documented by DCI-Palestine, the use of house arrest is not connected to serving a sentence of any kind: children have not officially been charged with an offense. Instead, they are released from detention on the condition that they agree to remain under house arrest before attending a trial. This also has ramifications for a child’s education. “Often, house arrest leads to a child dropping out of school, either because of the shock sustained during interrogation, or because of a loss of concentration or strong feelings of anxiety linked to the period of house arrest,” says Faraj.

Othman’s case was typical: Israeli authorities first arrested and interrogated him on suspicion of stone-throwing, detaining him for one month before he appeared in a magistrate’s court. There, he was released on the condition that he remained under house arrest while further charges against him were determined. 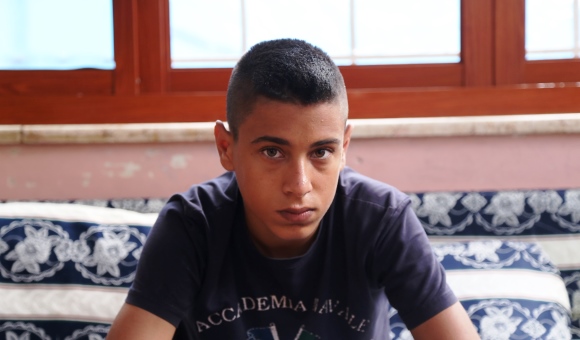 These house arrests have occurred within the context of an intense clampdown on Palestinian youth in East Jerusalem by Israeli forces following the murder of three Israeli settler teens in June, and the subsequent revenge murder of 16-year-old Palestinian Mohammad Abu Khdeir. In September, Haaretz reported that hundreds of children from East Jerusalem had been arrested in the preceding three months, with many detained in prisons for long periods on minor charges.

Confrontations between residents of East Jerusalem and Israeli forces further increased during Israel’s military offensive on the Gaza Strip during the months of July and August. The offensive killed over 2,000 Palestinian civilians, including 480 children, according to DCI-Palestine figures.

Though a ceasefire was reached on August 26, the atmosphere in East Jerusalem has remained tense, exacerbated by a perceived rise in the presence and heavy-handedness of Israeli forces.

Residents of East Jerusalem also accuse Israeli forces of seeking out conflict. On September 24, 2014, the Aytam School in the Old City was attacked by Israeli soldiers, who claimed that students were throwing stones from school windows: a charge vehemently denied by the school’s principal, Munther al-Natsheh. “The windows, through which the Israeli police forces claim students throw stones, are actually closed by wooden screens, and you can’t throw anything from there,” he says.

Al-Natsheh also states that, upon receiving a warning from Israeli forces, students were moved from these classrooms to prevent any potential clashes. Three boys in the 10th and 11th grades sustained injuries from sponge-tipped canisters in the attack.

Violence of this kind, alongside cases like Othman's, highlights an institutionalized disregard for children’s rights within the Israeli military, as well as a flouting of international juvenile justice standards. International law requires that in all actions concerning children the best interests of the child shall be a primary consideration. International juvenile justice standards also demand that children should only be deprived of their liberty as a measure of last resort and for the shortest appropriate period of time.

By signing the UN Convention on the Rights of the Child in 1991, Israel obligated itself to implement these internationally-recognized standards. While conditional house arrest is preferable to custodial pretrial detention under international law, it may still result in violations of a child’s right to education and be against a child’s best interests.

The tactics of Israeli forces in using extended house arrests to restrict a child’s movements have directly impacted on the lives of boys like Othman, who remains under house arrest awaiting his trial. Asked what might be the outcome of the trial, he remains silent.