Children shot and injured near Gaza’s border fence with Israel 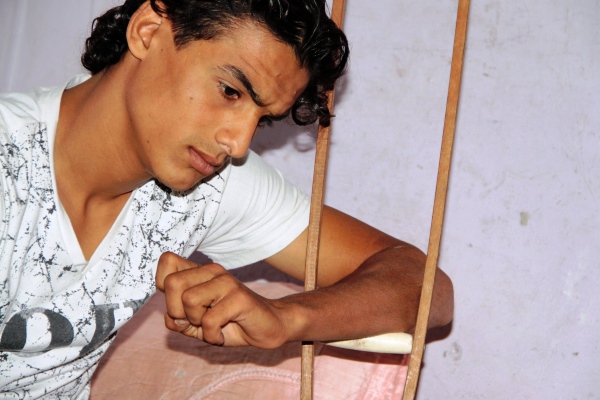 "As I ran to get cover from the bullets, I felt something hit my foot and I was down. I was too close to the fence at that point. I had to pull myself away, crawling," said 17-year-old Yazid Abu Khader.

Gaza, 26 November 2013­—Yazid Abu Khader, 17, once the only bread winner of his eight-member family, struggles to stand up at his house in central Gaza Strip. The teen suffered a disability from a gunshot injury when he took part in a rally near Gaza’s border fence with Israel.

Waiting for us at the corner of the unpaved street that led to Yazid's house was his younger brother. As we approached the street, the boy gestured to us to follow him. Rags and blankets hanging at the entrance of Abu Khader's house seemed to be put there for a purpose; as if to hide the pain that lies within those walls.

Young Abu Khader, whose father served time inside Israeli jails, was used to attending rallies in support of Palestinian prisoners, but in April, an Israeli soldier shot him in the foot, nearly putting an end to the boy's ability to walk.

"As I ran to get cover from the bullets, I felt something hit my foot and I was down. I was too close to the fence at that point. I had to pull myself away, crawling," said Abu Khader.

Yazid's injury is only one of many reported this year. According to the Palestinian Center for Human Rights (PCHR) monthly reports, 11 children, including a two-year-old girl, were shot by the Israeli military since the beginning of 2013, 10 of whom near Gaza's border fence with Israel and one in the fishing area off Gaza’s coast.

Although the majority of these children were shot and injured while in the area traditionally known as the buffer zone, usually defined as three hundred meters (1,000 feet) from the border fence, two-year-old Nahed al-Udaini of Deir Al-Balah was shot in her left leg while playing in front of her house, a thousand meters (1100 yards) away from the fence, according to PCHR January 2013 report.

With no other source of income, and being the eldest among his siblings, Yazid Abu Khader had started to work at an iron molding factory at the age of 11, when his father was serving time in an Israeli jail. But now, with two canes that he uses to help him stand up and walk, he is no longer able to do such a job.

"I can't carry heavy things. I can't even walk straight, and if I happen to step on a small stone, I fall down," the shy boy said, rarely raising his head when he spoke.

Inside the one bedroom house, we went through a modest kitchen, which shared its refrigerator with the living room where Yazid laid on his bed, wearing a white T-shirt and blue jeans, with his foot raised on a yellow pillow. His mother apologized for not having suitable chairs.

As we sat down and spoke with Yazid, his little brothers and only sister gathered around us as if to hear his story again. This was not Yazid's room alone. He shared it with three of his siblings. In the living room, where the young man spends most of his time, and sleeps, there were two other makeshift beds, one is a couch and the other is a mattress laid on the floor and covered with blankets.

Abu Khader has been through physical therapy for the past six months and he might need to undergo surgery, according to doctor Nashaat al-Ramli, an orthopedic surgeon at the bone department of Al-Shifa Hospital who has examined the boy recently.

"We still have to wait for the updated X-rays and neurology test results, but from what I see, I can tell that Yazid may not be able to walk normally or carry heavy items for quite some time,” said al-Ramli. "He may need an operation to repair the damage to his ankle, and he will definitely need further physiotherapy."

Borrowing the canes from a friend, Abu Khader was ashamed they revealed his new disability, and hid them behind his bed. He could no longer hang out with his fellow friends or enjoy playing football.

"We still go to the beach sometimes. But I have to sit down all the time. I can't do anything else," said Abu Khader, in a hardly-heard voice.

As Palestinians try to stay within a safe range of the fence, it has been difficult to accurately identify what that range might exactly be. Data collected by the Palestinian Center for Human Rights since the second intifada of 2000 shows that land within one hundred meters (330 feet) to two kilometers (1.25 miles) has been restricted at one point or another, with three hundred meters (1000 feet) being the range prevailing for the most part.

An Egyptian-brokered ceasefire agreement between Israel and Gaza in November 2012 was said to bring down that range to one hundred meters. At that time, some Palestinians reported being able to get as close as touching the fence and farmers began to plant their land, which prior to the agreement was off limits.

However, the PCHR reports that in March 2013, the access restricted area was redefined to three hundred meters, which accounts for 17% of Gaza Strip's area.

Not only on land, but also at sea, there is still confusion. Over the years, the distance fishermen are allowed to sail and fish has shrunk from 20 autical miles as agreed by the Oslo accord to three nautical miles in June 2007. In November 2012, this area was extended to six nautical miles, but again redefined to three in March 2013.

When asked whether he felt scared when he was shot, Yazid's mother, who overheard the question, answered instead: "I was terrified. I thought I was going to lose my son. Doctors told us he had lost a lot of blood.” Yazid, however, continued to stare at the scar left at the place where the bullet exited his right ankle.

Maha Elbanna is a freelance journalist based in Gaza and contributes articles to Defence for Children International Palestine.