Palestinian children stand at the window of their home in Beit Hanoun in the northern Gaza Strip, which was heavily damaged during Israeli strikes during May 2021. (Photo credit: Mahmud Hams / AFP)

Ramallah, March 31, 2022—Defense for Children International - Palestine met with United Nations investigators in Jordan earlier this week to share information concerning serious breaches of international law in the Gaza Strip during May 2021.

Khaled Quzmar, general director at DCIP, met with members of the UN’s Independent International Commission of Inquiry on the Occupied Palestinian Territory, including East Jerusalem, and in Israel on Sunday, March 27, in Amman. Israeli authorities denied the Commission of Inquiry access to Israel and the OPT, so human rights organizations, including DCIP, traveled to Amman to present evidence to the Commission’s members. Quzmar presented evidence collected by DCIP concerning the 67 Palestinian children who were killed in the Gaza Strip during Israel’s 11-day military offensive that occurred between May 10 and 21, 2021.

“Israeli armed forces have been regularly implicated in serious, systematic, and institutionalized human rights violations against Palestinian children living in the occupied West Bank, including East Jerusalem, and the Gaza Strip, yet systemic impunity has remained the norm,” said Quzmar. “The Commissioners must pursue accountability by analyzing alleged violations of international criminal law falling within the jurisdiction of the International Criminal Court and naming perpetrators.”

Quzmar submitted a 30-page report to the Commission of Inquiry that details the 67 child fatalities that occurred in the Gaza Strip during the 11-day escalation of violence between May 10 and 21, 2021, 60 of which were the direct result of Israeli attacks, according to investigations by DCIP. During the military assault, Israeli forces killed Palestinian children using tank-fired shells, live ammunition, missiles fired from weaponized drones, and other munitions dropped by United States-sourced warplanes. DCIP investigations determined that seven Palestinian children were killed by rockets fired by Palestinian armed groups within the Gaza Strip. 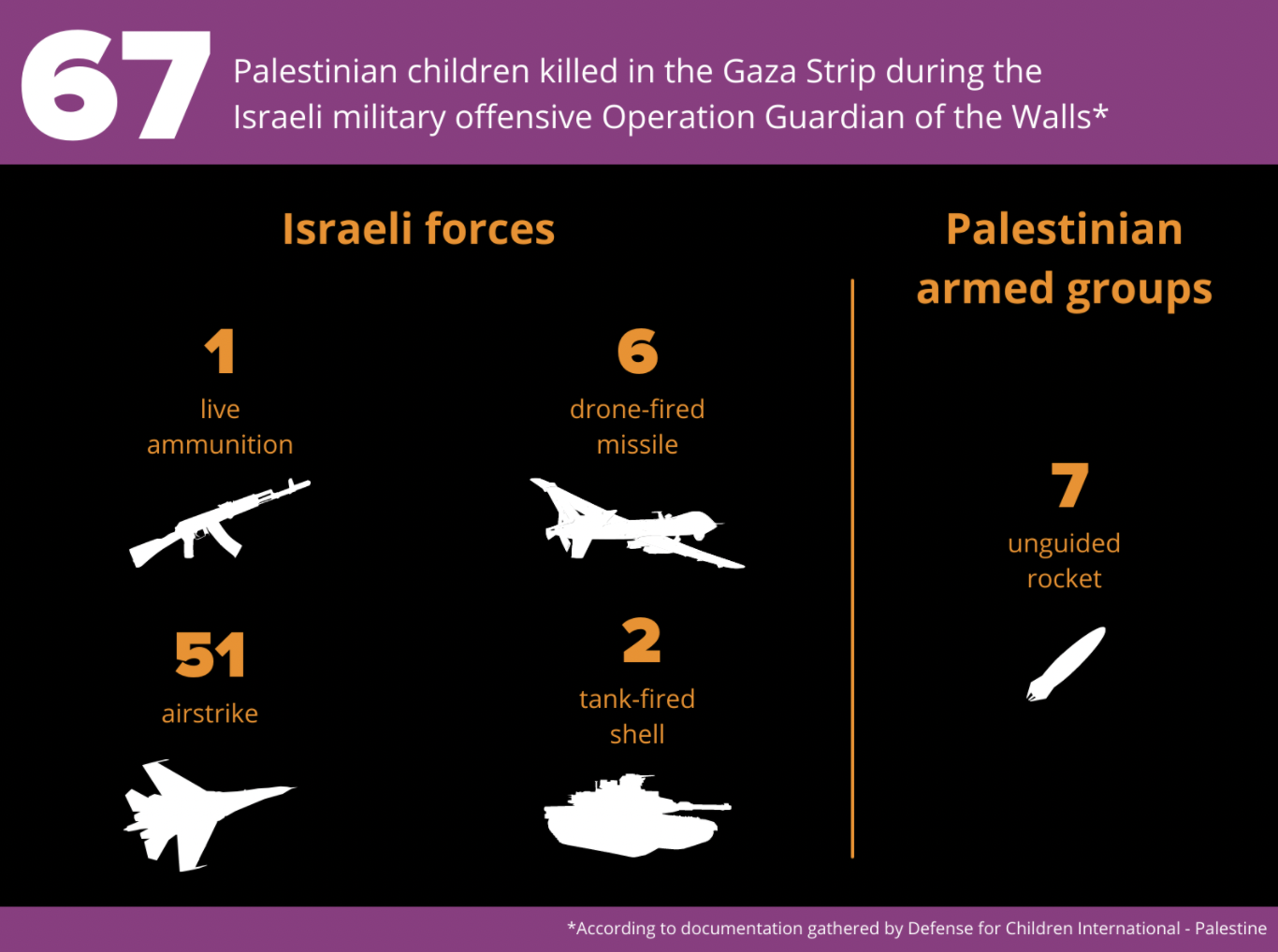 The UN Human Rights Council established the Commission of Inquiry during a special session in May 2021 that was held shortly after Israel’s military assault ended. Unlike previous commissions of inquiry and fact finding missions established after Israeli military assaults and the Great March of Return, this commission is permanent and will not only investigate violations of international law that occured during Operation Guardian of the Walls, but also “all underlying root causes of recurrent tensions, instability and protraction of conflict, including systematic discrimination and repression based on national, ethnic, racial or religious identity.”

Children affected by armed conflict are entitled to special respect and protections under international law, but Israeli armed forces have consistently violated these protections through indiscriminate and disproportionate attacks that result in the unlawful killing and maiming of children amounting to war crimes, according to evidence collected by DCIP.