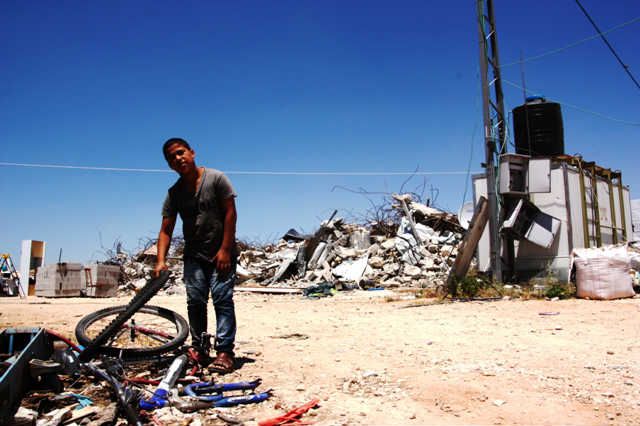 With an Israeli administrative system that has denied 94% of requests for permits to build in recent years, writes Miriam Pellicano, it is little wonder that Palestinians are taking matters into their own hands, often with dire consequences.

When others laugh at your misfortune

East Jerusalem, June 27, 2013—From the open front door of Muhammad Castiro’s recently erected caravan, the view of a towering mound of rubble obscures the landscape and the neighborhood. The piles of stones and snaking iron rods, which jut out of the mound, bury furniture, possessions and a life that once was.

“We spend our time picking up fragments from the rubble,” Nadia, mother of seven, tells Defense for Children International Palestine fieldworkers. “We pick up a splinter of wood and say, this came from my bed. This affects us emotionally a lot.”

When the army arrived to demolish their houses, in Beit Hanina, an East Jerusalem suburb, in February, they allowed the four families no time to salvage any of their belongings. They had time to retrieve money and jewelry and then were not able to enter the house again.

All the children left for school that morning, like any other morning, only to come home to their neighborhood hearing other children shouting “they are demolishing your home.”

“I was really angry and sad,” says Imran Castiro, 11, remembering the day of the demolition. “I could not believe what they were doing to my house and my memories.”

When Imran tried to get past the soldiers to get to his house, he said “they just laughed at me.” He recalls that there were three soldiers blocking him and laughing at him. This memory sits heavily with him. “I wake up at night panicking and cannot go back to sleep,” says Imran. “I am tired in the morning and cannot go to school.”

Listen to ‘Death is more merciful than a demolition’ on Audioboo

Blocked at every pass

Since the annexation of Jerusalem after the 1967 war, Israel’s Jerusalem municipality has employed a series of measures to fulfill the “demographic policy plan.” This plan aims to reach and maintain a ratio of a 70 percent majority Jewish population in Jerusalem.

The Israeli Committee Against House Demolitions states in a report, “as it stands, Israel has not updated the regional urban plan for East Jerusalem since its occupation and annexation in 1967, and no new Palestinian neighborhood has been created since.”

For the period of January to April, 2013, the United Nations Relief and Works Agency (UNRWA) reports 90 people have been displaced in East Jerusalem, including 49 children, as well as 183 people being affected by a demolition, including 89 children.

While Jewish only settlements keep mushrooming throughout East Jerusalem, Palestinians routinely are denied permits to build, and with the population for this community quadrupling since 1967, they are left with little option but to build illegally to accommodate for the natural population growth rate.

The ongoing costs of a demolition

The threat and the execution of a demolition have far reaching impacts, beyond the financial. The spiraling physical and mental health issues that ensue affect all members of the family.

A study released by Save the Children-UK, the Palestinian Counseling Center and the Welfare Association states that “children who have had their home demolished fare significantly worse on a range of mental health indicators, including withdrawal, somatic complaints, depression/anxiety, social difficulties, higher rates of delusional, obsessive, compulsive and psychotic thoughts, attention difficulties, delinquency and violent behavior.”

Zakaria Castiro, 13, admits that since the demolition he has had a lot of difficulty concentrating and his grades at school have suffered. The family of nine live in a two room caravan, where the largest room, four meters (13 feet) by five meters (16 feet), serves as the lounge room, dining room, study area and bedroom for the seven children. “You cannot focus here,” says Zakaria, “there is no studying atmosphere and there are too many distractions.”

Imran also feels that he is not good at school anymore and because of this he doesn’t like any of the subjects he has to study. His mother, Ghada, can see a big difference in him. “He used to be smart and obedient,” she says. “Now he refuses to do his homework, he gets angry fast and he doesn’t listen.” Most strikingly, however, is that Imran describes himself as not having any joy. When he leaves the room, his mother emphasizes this point again.

As parents struggle through their own emotions and stress after a demolition, they may have the inability to prevent their children’s sadness from developing into depression. "Parents are so overwhelmed that they cannot contain their children's emotions,” says Anan Srour, clinical and educational psychologist at the Palestinian Counseling Center. “Sadness is a normal stage of the process, however if there is not a space for children to grieve, their sadness turns to anxiety and depression. Anxiety becomes a more difficult task to go through."

Children become acutely aware of how they are perceived differently by their friends and peers at school after a home demolition. The children feel that they stand out and that people look at them with pity. It makes them feel like “outsiders.”

“One friend used to come here to play. She notices that the situation has changed and now she doesn’t visit here,” says Dana Castiro, 10. “I don’t visit my friend. I don’t want to play anymore.”

Emergency support is offered to families who have their homes demolished. As part of this aid package, efforts are undertaken to supply the children with resources in order to minimize any disruption to education.

The children display the notebooks, pencil cases and backpacks that UN agencies have supplied. The large agency branding is splashed all over the items, indicating clearly that the children are recipients of humanitarian aid.

“The UN helps the poor, victims, people whose lives have been destroyed,” say Imran, “we don’t want to be identified as such.” The children are highly sensitive to any disparity between themselves and their peers, and are reluctant to amplify this by branding their tragedy.

There can be large discrepancies in the time taken to enact a demolition order. Overwhelmingly families are given little if any time to lodge an appeal with the courts once an order has been issued. However, time can vary from 24 hours to a couple of months to a couple of years, leaving families in varying states of limbo.

“The child, on his way to school, is not sure that he will come back and find his house is still there,” says Srour, who has worked with families with pending demolition orders. "They don't know the date they will lose their home, so they are in a constant state of stress. It has implications on all of their daily functions and parents don't have the psychological energy to meet their children's demands."

Currently the Castiro families are living in three separate caravans on the edge of their demolished house, recently erected after living in tents for two months. They are trying to wage two legal battles, one to acknowledge their land rights and the second to stop the demolition orders that have been issued on their caravans.

Court orders family to demolish their own house, or face a three-year jail term

The Association for the Civil Rights in Israel reports that 79.5 percent of East Jerusalem residents and 85 percent of East Jerusalem children live below the poverty line. With families having to reimburse the municipality for the cost of demolishing their home, families are now taking to destroying their own homes with the hope of salvaging their belongings and cutting down on costs.

The Es’eed family of Beit Hanina, Jerusalem, is one such family. When Dahoud, 42, father of seven children, the youngest three months old, was faced with the ultimatum to destroy his own house or face either a 20,000 shekel fine (US$5,400) or a three-year jail sentence, he chose to demolish his own home. Over a period of five days, with help from his neighbors, he tore down his house.

When Ala Es’eed, 13, arrived home from school that first day, she was shocked to see her father and neighbors smashing the walls. Since this time, her mother states that Ala’s grades have dropped and she always cries.

“I have not been able to eat or drink well since that day,” Ala tells Defense for Children International Palestine fieldworkers. “I feel weak and cannot do anything. I want to help, but cannot. I am very angry because of this and because of my living conditions. I am exploding inside.”

Despite her father’s assurances that he will build her a better room, the family still remains homeless.

*Miriam Pellicano volunteers with the Accountability Program at Defense for Children International Palestine. A version of this article was originally published in Al-Monitor:
http://www.al-monitor.com/pulse/originals/2013/06/palestinian-children-trauma-house-demolitions.html.