A Palestinian child stands across from an Israeli settlement and military base in Hebron's Old City. (DCIP / Dylan Collins)

Editor’s note: This article is part three of a three-part series by Patrick O. Strickland* based on a DCI-Palestine report, which investigates the devastating impact on Palestinian children of growing up near Israeli settlements. Read part 1: "Price-tag" attacks: High cost for Palestinian children living near settlers. Read part 2: Palestinian schoolchildren terrorized by settler vigilantes, soldiers. Read the DCI-Palestine report: Growing up between Israeli settlements and soldiers.

Ramallah, June 30, 2014—Urif Secondary School is located 13 kilometers (about 8 miles) south of the northern West Bank city of Nablus. It lies in close proximity to the Yitzhar settlement, and has become a frequent target of both settler and military attacks.

Nabil al-Najjar, the principal at Urif Secondary School, says the Israeli military has attacked the school six times since September 2013.

One of the most recent attacks took place on Jan. 12, 2014, on a day when students at the school were sitting exams. It started when settlers threw rocks at the school and Israeli forces arrived a short time later.

Al-Najjar says that the soldiers cut the cables to the school’s security cameras and waited at the front gate. At 9 am, a group of students finished their exam and left the school grounds. Shortly after, confrontations broke out between the students and soldiers.

Al-Najjar recalls that one group of soldiers entered classrooms while exams were still in session, but that teachers intervened and prevented them from arresting any students. Another group of soldiers surrounded the campus, firing rubber-coated metal bullets and launching stun grenades and tear gas canisters into the school grounds. The wind blew tear gas into the classrooms while students were still inside.

After al-Najjar negotiated with the army the soldiers retreated, but dozens of children were injured by rubber-coated metal bullets and tear gas inhalation. A handful needed hospitalization. 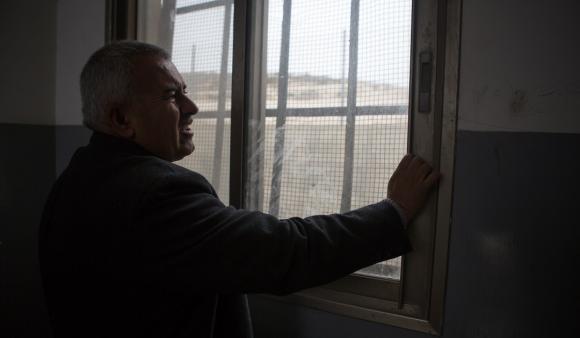 The Israeli military uses what it calls “non-lethal riot dispersal” methods – including stun grenades, tear gas and rubber-coated metal bullets – against Palestinian protests or clashes. In spite of their name, these methods can inflict serious, sometimes fatal, injuries, particularly on children.

According to a February 2014 Amnesty International report, two Palestinians were killed by weapons other than live ammunition between January 2011 and December 2013. Amnesty estimates that another 8,000 Palestinians were injured by such weapons, 1,522 of whom were children.

One of those children is six-year-old Mus’ab Sarahneh. He lost an eye after being hit in the face with a rubber-coated metal bullet fired by an Israeli soldier in Fawwar refugee camp, near Hebron, in September 2013. Mus’ab’s mother, Heyam, told DCI-Palestine in a statement that despite his serious head injury, they waited four hours for approval from Israeli authorities to travel to East Jerusalem for medical treatment.

A few days later, on Oct. 1, 2013, an Israeli soldier shot 16-year-old Yazan Mahmoud Abed Zaid in the leg with a rubber-coated metal bullet as he stood outside the UNRWA Boys’ School in Jalazoun refugee camp near Ramallah. Following the injury, Yazan underwent a five-hour surgery to remove the bullet.

An Israeli military spokesperson did not reply to DCI-Palestine’s requests for a comment about Mus’ab Sarahneh or Yazan Mahmoud Abed Zaid.

For Jalazoun residents, the presence of Israel’s Beit El settlement has created an environment that fosters conflict between the camp’s youth and Israeli soldiers. Home to nearly 6,000 Israeli settlers, Beit El is predominantly built on privately-owned Palestinian land and is surrounded by several checkpoints, military watchtowers and bunkers.

A permanent military watchtower overlooks an olive orchard that separates the UNRWA school from the Beit El settlement. Due to its proximity to the school, soldiers and private security are often present near the school, or in the camp, causing tension in the area.

According to a faculty member at the UNRWA school, the military boarded up all the windows on the side of the school that faces the settlement and evidence of military activity is often found in the school grounds.

“Each morning, we walk around the school and pick up the tear gas canisters, sound bomb shells and rubber bullets,” the faculty member said, speaking on the condition of anonymity.

Sources at the school say fear of military violence, as well as overcrowding and lack of resources, have contributed to a high dropout rate. This leaves many young people in the streets without work or studies and clashes with the military have become more frequent.

On May 21, 2013, 12-year-old Atta Sabah was shot with live ammunition by an Israeli soldier near the school grounds. The bullet entered Atta’s stomach and severed his spinal cord, leaving him paralyzed.

Mahmoud, 15, an eyewitness to the shooting, later told DCI-Palestine: “(Atta) walked for about one or two meters toward the soldier. Suddenly, he wanted to turn around and run away. At that moment, the second soldier fired one bullet and I saw Atta fall immediately.”

Atta says that he was trying to retrieve his schoolbag from the soldier, who had taken it from him the day before. Eyewitnesses report that there were no clashes taking place in the area at the time.

The Israeli military later claimed that the shooting happened when “a violent and unlawful riot took place in the area, with the participation of dozens of Palestinians who threw rocks and Molotov cocktails toward the soldiers.”

In another incident on Dec. 7, 2013, 15-year-old Wajih al-Ramahi was shot in the back and killed from a distance of about 200 meters (656 feet) at a playground near the UNRWA school by an Israeli soldier using live ammunition.

Eyewitnesses confirmed that Palestinian youth had been throwing stones at Israeli soldiers at the time, but Wajih’s father, Wajdi, insists that his son was “playing soccer. He wasn't throwing rocks or doing anything else.”

It remains unclear whether Wajih was involved.

The Israeli military later announced that it had been engaged in clashes with stone-throwing youth at the time and said that it was investigating the matter, according to Haaretz and other news reports. To date, no further information has been released about the investigation.

Wajih’s father told DCI-Palestine that his brothers and sisters are finding it hard to cope with his death.

“My youngest son cannot sleep anymore,” he said. “He wakes up crying and comes to sleep in our room. He doesn’t understand why his brother was killed. The others are always scared.”

The al-Ramahi family’s tragedy is not unique. Four more Palestinian children were killed by Israeli soldiers in 2013.

This is by no means an exhaustive account of the harm inflicted on Palestinian children as a result of the establishment, preservation and expansion of Israeli settlements. Yet these anecdotes of settler and military violence serve as a window into the innumerable injustices Palestinian children face due to the presence of Israeli settlements and the military infrastructure and personnel that guards them.

Almost more alarming than the fact that 1,405 Palestinian children have been killed by Israeli soldiers or settlers since 2000 is the climate of impunity that makes such violence possible.

Although the UN and other international legal institutions have consistently condemned Israel’s practices in the Occupied Palestinian Territory, little has been done to either put pressure on Israel or hold its government and institutions accountable.

In July 2004, the International Court of Justice (ICJ), while issuing an advisory opinion about Israel’s separation barrier in the West Bank, reaffirmed that Israeli settlements violate international humanitarian law and international legal standards.

The report from the 2013 United Nations International Fact-Finding Mission on Israeli Settlements in the Occupied Palestinian Territory concluded: “The identities of settlers who are responsible for violence and intimidation are known to the Israeli authorities, yet these acts continue with Israeli impunity.”

The report also called on Israel “to ensure the full accountability for all violations, including for all acts of settler violence, in a non-discriminatory manner and to put an end to the policy of impunity.”

Indeed, following incidents of settler violence, lack of justice is the norm and not the exception. In a report published in July 2013, the Israeli human rights group Yesh Din found that more than 90 percent of the investigations opened into settler violence between 2005 and 2013 “were closed without an indictment being served against suspects.”

A recent Amnesty International report documented 41 Palestinians killed by live ammunition in the West Bank between January 2011 and December 2013. Another recent Yesh Din report, however, found that “only 16 investigation files opened from September 2000 through mid-2013 regarding incidents when Palestinians were killed led to indictments.”

The lack of accountability for Israeli military and settler violence perpetuates an environment in which children are targets. Worse still, many Palestinians are resigned to a reality without safety and justice for their children.

“We’re used to death,” concluded Wajdi al-Ramahi, whose 15-year-old son was shot and killed by an Israeli soldier last December. “I cannot protect my children here. We do everything we can to guarantee their protection, but in the end it’s all in God’s hands.”