Ramallah, September 9, 2014—As the smoke clears over Gaza and its residents begin to assess the damage of Israel's 50-day war, no group has been more traumatized than this enclave's children. They represent roughly half of Gaza's population and, according to a report released on August 27, died at a rate of twelve a day, every day, during the conflict. Their parents, too, have perished in unprecedented numbers, leaving more than 1,500 of Gaza's children orphaned.

Alaa Balata is one of them.

I met Alaa during one of the war's temporary ceasefires. Israeli drones buzzed overhead, and the 17-year-old was surrounded by relatives who had been keeping a close eye on him since his parents perished. It had been fewer than two weeks since the incident, and Alaa spoke in the steady understatement of a person in shock, damming the sadness — at least for now.

'He thought we would be safer.'

When I asked him what happened, Alaa gestured toward the heap of rubble that was his uncle's home. We were sitting on plastic chairs in a dirt alley flanked by cinder-block walls — a familiar scene in any Palestinian refugee camp. But here, in the heart of Jabalia, the path was strewn with shrapnel—the same dense metal that tore through every member of Alaa's immediate family on the afternoon of July 29. 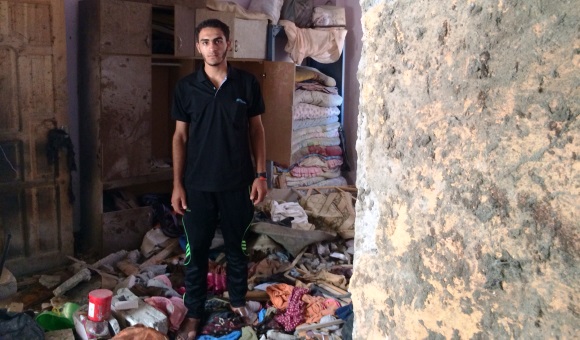 "It was the second day of Eid," Alaa told me. A day earlier, on the first day of the Muslim feast marking the end of Ramadan, Alaa’s father decided to move the family to his brother’s house, which was was deep inside the camp and farther from the Israeli tanks shelling everywhere along Gaza's border.

"He thought we would be safer here," Alaa said.

What happened to the Balatas next speaks to a defining truth in Israel's war-of-one-army: It is that no logic could spare the innocent. Children, especially, had no refuge, despite their parents' best efforts to shield them. And even if they had a calculus—a way to hedge against the fixed-wings or the drones—that formula failed when the tanks came.

The Geneva-based Euro-Mid Observer for Human Rights estimates that, from the beginning of their ground operations on July 17, Israeli tank units fired more than 36,000 artillery shells into Gaza. Although the sheer number of artillery strikes was astounding, what made this Israeli tactic so devastating was its randomness, say military experts.

A former Israeli infantryman, writing for +972 Magazine, likened the artillery fire to "Russian Roulette" because "[i]t is impossible to aim the shells in an accurate manner," and "they are not meant to hit specific targets." Said Idan Barir:

"The shells have caused unbearable damage to human life and tremendous destruction to infrastructure, the full scale of which will only be revealed when the fighting is over."

Even Israel's allies were shocked by the intensity of its shelling on civilian areas. On August 27, the day after an open-ended ceasefire was announced in Gaza, US military officials called the shelling of Shuja'iyya, the eastern Gaza town largely leveled by Israeli artillery fire, "absolutely deadly" and meant only "to kill a lot of people in as short a period of time as possible.”

They had every reason to be shocked. The same day that an Israeli artillery attack killed at least 17 people in a crowded market in Shuja'iyya, a United Nations school in Jabalia was also hit, killing 19. The July 30 attacks followed earlier barrages of artillery fire, including a seven-hour onslaught that, according to a Pentagon briefing, pumped 4,800 shells into a single neighborhood of Shuja'iyya.

Speaking to Al Jazeera America, Lt. Gen. Robert Gard said: “That rate of fire over that period of time is astonishing. If the figures are even half right, Israel’s response was absolutely disproportionate.”

In Jabalia, Gaza's most populated refugee camp, such attacks were bound to be devastating. According to the UN Relief and Works Agency, which administers the camp, it is home to 110,000 refugees, all packed into an area that is only 1.4 square kilometers. Lacking a steady supply of basic services, like water and electricity, Jabalia has been hit hard by the eight-year Israeli siege on Gaza. And in this latest round of Israeli attacks, it didn't help that Jabalia is the closest of Gaza's camps to Israel's southern border, where tank units pounded nearby Beit Hanoun.

Alaa's uncle, Abdel Karim Balata, recalled the day the shells reached his neighborhood. "It was after lunch, around 3:30 in the afternoon," he said. "Alaa had just stepped outside to get water when the shells hit."

The 51-year-old Balata, who was also out that day, walked through what's left of his four-room home. Above the entryway is a hole where the concrete roof used to be. The vestibule walls are scarred by shrapnel, the still-intact ceilings tarred by the blast. Balata pointed to a spot on the kitchen wall and told me: "My daughter wrote this." And then, in the present tense: "She wants to be a doctor." 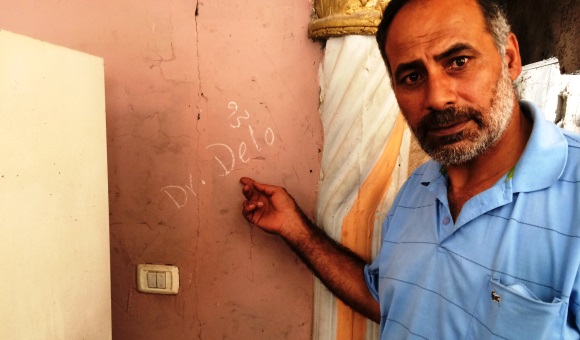 Of all the damage wrought by Israel's 50-day assault on Gaza — more than 2,000 dead, a quarter of them children, some half-a-million displaced — it's still unclear how much was caused by artillery shelling. But the scale with which Israel deployed this tactic, usually reserved for fierce infantry fighting, has already drawn condemnation from human rights organizations, leading some to label the state's actions illegal under international law.

In January 2009, during Israel's "Operation Cast Lead" in Gaza, Human Rights Watch said the tactic violated "the prohibition under the laws of war against indiscriminate attacks and should be stopped immediately." An earlier report published by the watchdog group said the artillery attacks showed "insufficient regard for civilian life." The 2007 report also condemned Hamas for its indiscriminate firing of rockets into civilian areas.

Abdel Karim Balata said that a human rights organization (he couldn't recall the name) had visited his house to collect evidence of the July 29 attack, including shrapnel from artillery shells. But Israel has denied entry to Gaza for both Human Rights Watch and Amnesty International, both of which had been seeking entry to the enclave since July 8. Israel has also barred an investigative commission appointed by the UN's Human Rights Council.

For his part, Alaa shows no interest in waging a legal battle. He is like so many in this battered land, where those who have suffered most inevitably say the least. It is a hallmark of victims everywhere, but here, in this teeming refugee camp, the reminders — of Palestinian dispossession, of repeated military assaults, of irreplaceable loss — leave the grief-stricken in a seemingly permanent state of shock.

When he finally gets beyond the basics of that awful afternoon, Alaa tells me the story of his eight-year-old brother, Yahya.

Alaa had no idea what happened to the rest of his family, but he clung to the hope that Yahya, at least, would survive. He took his brother from the two men that had pulled him out of the house's courtyard, cradled him in the blanket, and ran to find a taxi to take them to nearby Kamal Adwan Hospital.

"I kept talking to him, telling him to be strong, to be patient." Alaa's was speaking softly but clearly, his eyes giving away what his voice would not. "I kept talking to him," he said, "but there was a big hole where his stomach used to be, and I couldn't figure out how to do it — how to hold his insides in."

By the time they arrived to the hospital, eight-year-old Yahya was barely breathing. Doctors immediately shuttled him to an ambulance, which rushed off to Gaza City's Al-Shifa Hospital. Although the better-equipped hospital was already overwhelmed with patients, Yahya could at least stand a chance of surviving there.

He didn't. By the time Alaa got the news, he had just heard that the rest of his family — his father, his mother and his six sisters — were gone, too.

This week, Alaa was supposed to start a new school year. It would have been a welcome distraction from the memories that have haunted him since that day at his uncle's house. But like fellow students across Gaza, Alaa has had to stay home, as dozens of Gaza's schools continue to shelter displaced families. With tens of thousands of homes destroyed, especially along Gaza's eastern and northern borders, Alaa is lucky to have his relatives caring for him.

"He lost everything, this child," his uncle says. "And, to think, they came here to hide."

"In Gaza, there is nowhere to hide."