Four teens among the wounded at Qalandia refugee camp 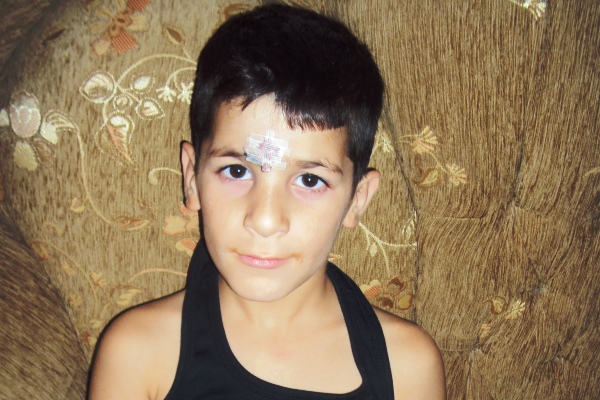 Laith Abu Aker, 8, from Aida refugee camp near Bethlehem was struck in the forehead by a rubber-coated metal bullet fired by Israeli forces on Monday.

Undercover Israeli forces entered the Qalandia camp to arrest a resident and called in reinforcements when they faced heavy resistance. Israeli soldiers shot and killed three Palestinian men and injured more than a dozen others, among them four boys ages 16 and 17, according to witnesses and news reports. Three of the teenagers that DCI-Palestine visited had gunshot wounds to their left leg. While receiving first aid, one of them found out he had been shot three times in the leg.

Last week, Israeli forces killed a Palestinian man in Jenin refugee camp and injured several others during a night raid similar to the deadly incident at Qalandia. Among the injured was a Palestinian teenager who sustained a gunshot wound to his lower torso and required emergency surgery to remove his kidney and lung, according to hospital sources.

While Israeli forces regulations allow the use of these weapons for crowd control in certain narrow circumstances, only a third of these cases involve children directly participating in demonstrations where clashes with Israeli forces later occurred.

The regulations allow soldiers to use live ammunition “only under circumstances of real mortal danger,” according to a recent report by B’Tselem, an Israeli human rights group.

In May 2013, the average number of civilians injured by live ammunition or rubber-coated bullets more than tripled compared to this time last year, according to the United Nations Office for the Coordination of Humanitarian Affairs (OCHA).

Senior Ranking Officers have stated that violations of Israeli military open-fire regulations are “exceptions rather than the norm.” However, DCI-Palestine documentation shows 42 percent of children were shot in the face or head, 21 percent in the arm or chest and 17 percent in the stomach.