Ramallah, December 31, 2014—2014 brought no respite for Palestinian children, whether entangled in the Israeli military detention system, living in residential areas in the Gaza Strip, or simply on their way to school. Here are the five factors that most affected Palestinian children in 2014.

For many observers of the Israeli-Palestinian conflict, 2014 will be remembered for the images it broadcast to the world from the Gaza Strip. These images depicted children fleeing from heavy bombing and shelling by Israeli forces, taking shelter with their families in crowded UN schools, or convalescing in Gaza’s overstretched hospitals. Among the most tragic were those that showed the bodies of four young boys, aged between 7 and 11, killed by a projectile fired by the Israeli navy, as they played on a Gaza beach during the offensive. 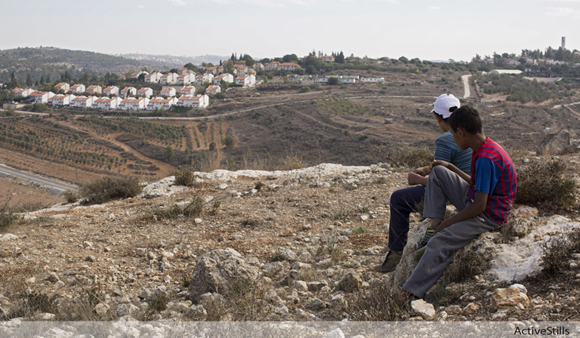 Wholesale violations of children’s rights across the Occupied Palestinian Territory led to numerous fatalities and injuries, as well as psychological trauma resulting from collective punishment policies that affected children, such as house raids and demolitions.

Here are the five factors that most affected Palestinian children in 2014, as observed by DCI-Palestine.

According to DCI-Palestine’s research, at least 480 children lost their lives in the 50-day military offensive, dubbed Operation Protective Edge, that saw vast swathes of the Gaza Strip flattened. The children who died made up a fifth of the 2,205 Palestinians who were killed during the conflict. Many more thousands of children were wounded, with approximately 1,000 sustaining permanent disabilities. 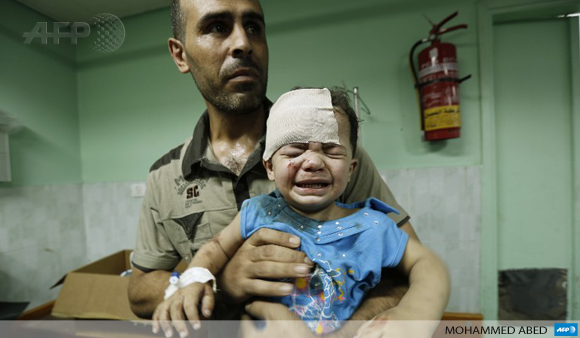 The high number of child and civilian fatalities raised critical questions about the disproportionate use of force by the Israeli military, and the illegal targeting of locations protected under international law such as schools, hospitals and shelters. Top UN human rights official Navi Pillay stated publicly that war crimes may have been committed by Israeli forces.

DCI-Palestine documentation also uncovered one instance in which the Israeli military used a Palestinian child as a human shield. This case involved a 16-year-old boy who was detained for five days, physically assaulted, and made to search for tunnels inside the Gaza Strip. 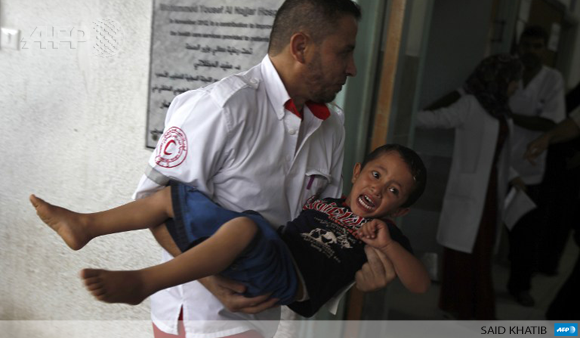 Though the media focused on the violence throughout the conflict, fatalities and injuries were being recorded even before the start of Operation Protective Edge. Before the conflict began, three children lost their lives as a result of Israeli gunfire or airstrikes, while at least 43 were injured in similar circumstances. 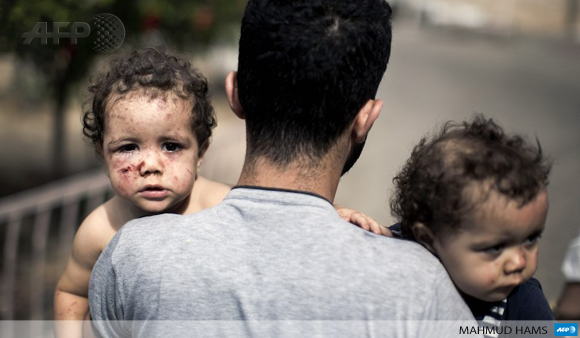 Since the end of the offensive reconstruction has been limited, despite the easing of the blockade being a key factor in reaching a ceasefire agreement. Children displaced during the conflict have remained in shelters into the winter season, which brought with it widespread flooding across the Strip.

Military detention is a reality for hundreds of Palestinian children each year, exposing them to physical and psychological violence, interrupting education, contributing to mental health issues, and placing large numbers of families under stress. This continued to be the case in 2014. 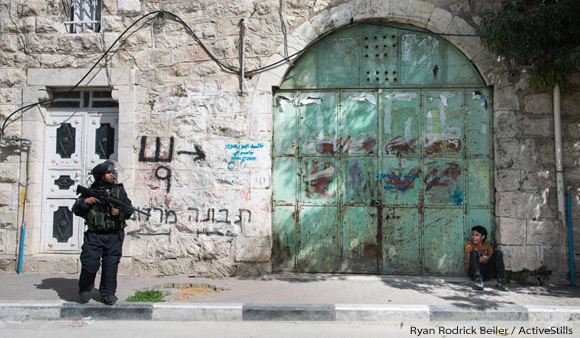 This year, the average number of children held in Israeli military detention stood at 197 per month, largely unchanged from the 2013 figure of 199 per month. This stable figure, however, masks the undercurrent of change taking place within the system, with a clampdown on Palestinian youth becoming apparent in the second half of 2014. 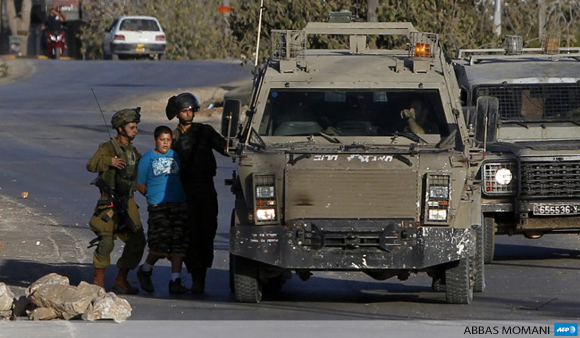 In September, a new military order, involving the interrogation of children in the Occupied Palestinian Territory, appeared to safeguard children’s rights. On closer inspection, however, it became clear that children arrested for throwing stones - that is, the majority of children entangled in the Israeli military court system - would not be protected by the new law. 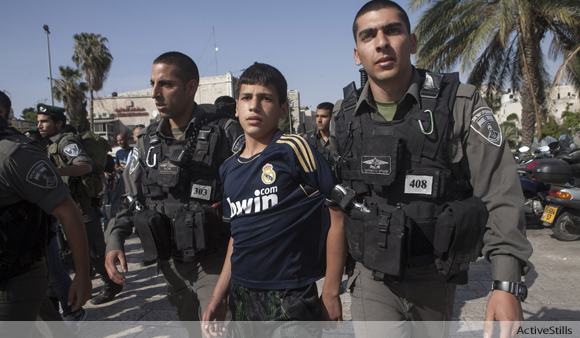 In November, the Israeli cabinet approved a bill extending the maximum penalty for those found guilty of throwing stones to 20 years, equivalent to the longest possible sentence for manslaughter. This bill also applied to children.

As a backdrop to these developments, the use of solitary confinement as a means of coercing confessions, and the arbitrary use of house arrest, continued to prevent Palestinian children from enjoying their rights as enshrined in the Convention on the Rights of the Child.

Settlers - Israelis who live in the West Bank in settlements that are deemed illegal under international law - have long been attacking Palestinians, including children. In June, DCI-Palestine published a report detailing incidents of settler attacks that took place in 2013, including attacks on children as they made their way to school and on school buildings during classes.

The report noted the implicit cooperation of soldiers in settler attacks, including cases in which soldiers either ignored overt attacks or even participated in the violence.

Documenting settler violence, DCI-Palestine found that 129 instances of settler attacks against children were recorded between 2008 and 2012. The announcement in October of a further 1,000 new settler homes across East Jerusalem will likely expose Palestinian children to further violence, as the number of Israeli settlers living in the Occupied Palestinian Territory continues to swell.

Live ammunition and deaths across the West Bank

At least 11 Palestinian children in the West Bank, including East Jerusalem, lost their lives in 2014 after being shot with live ammunition by Israeli soldiers. Fatalities increased in the aftermath of the killing of three Israeli teenagers in the West Bank in June and the subsequent revenge killing of 16-year-old Palestinian Mohammad Abu Khdeir, who was murdered in early July. This, as well as the conflict in Gaza during July and August, led to a rise in protests and a clampdown on Palestinian youth in East Jerusalem by the Israeli military.

Israeli forces stationed in East Jerusalem and the West Bank routinely used excessive force to disperse crowds, including using live ammunition, resulting in injuries and fatalities to children. Live ammunition, according to the Israeli military’s own regulations, must only be used in circumstances in which a direct, mortal threat is posed to a soldier. DCI-Palestine, to date, has found no evidence that suggests that the children killed in 2014 were posing such a threat at the time of their shooting.

In May, two teenagers, Nadeem Nawara and Mohammad Salameh Abu Daher, were fatally shot with live ammunition as they protested outside Ofer military prison in the West Bank town of Beitunia. CCTV and news footage of the event clearly indicated that both boys were unarmed at the moment that they were shot during a lull in the protest. In the aftermath, Israeli officials first disputed the legitimacy of the video evidence, and then categorically denied that live fire was used during the protest: weeks later, it was proven that both teens were killed by live bullets.

Israeli policies designed to collectively punish the civilian population, including children, continued apace across the Occupied Palestinian Territory. During Israel’s deadly assault on Gaza, the overwhelming majority of children were killed when their homes were bombed by Israeli missiles. In one case, 18 children from the same extended family, aged between 4 months and 14 years old, died when their home was bombed in an Israeli airstrike, which, authorities claimed, was targeting a Hamas member visiting the building at the time. 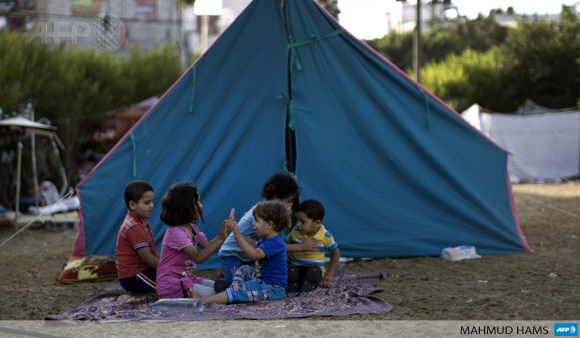 In the West Bank, Israeli authorities regularly approved the demolition of houses of those suspected, but not convicted, of crimes. The demolition of homes in which children are living contributes to psychological trauma, the interruption of education, and significant distress, and have been condemned by human rights groups in recent years.