A former child prisoner at Megiddo shows a craft he made from a ping pong ball. (Photo: DCIP)

Ramallah, April 11, 2016—The official Israel Prison Service (IPS) website for Megiddo prison furnishes few clues that its juvenile section has the capacity to hold 60 to 70 children and is responsible for their education under international law. An auto-forwarding image carousel shows watchtowers, a wire grid canopy covering an outdoor space, and dark hallways lined with metallic grating.

In accompanying text, the IPS website describes the type of “security” prisoners detained in Megiddo, making only brief mention of its population of minors and three classrooms for “elementary education.” Under the population tab, the webpage describes Megiddo’s prisoners as “highly motivated to disturb the daily routine of the prison, direct hostile actions from prison against the State of Israel, smuggle prohibited items and hurt staff members.”

The Ofek prison webpage, by contrast, where Israeli juvenile criminal offenders are held, shows photographs of students working at desks, murals of sea creatures and a cello, a courtyard with trees, and bird decals on a window. The site states that juveniles are held at Ofek for a range of offenses and disorders: “Some of the young people have behavioral disorders and they act impulsively and rebelliously, as adolescents tend to.”

As demonstrated by these webpages, the difference in the educational approach toward Palestinian and Israeli juvenile prisoners is quite palpable. While the IPS appears to have adopted a rehabilitative framework toward Israeli criminal offenders, Palestinian juvenile “security” offenders are imprisoned in an austere, punitive model.

Strong evidence of the meager educational offerings at Megiddo lies in the fact that sentenced Palestinian children are only offered two classes: Arabic and Math. In another IPS detention facility named Ofer, located outside of Ramallah in the West Bank, Palestinian child detainees also study Hebrew. Science classes are reportedly prohibited due to “security reasons.”

Children awaiting trial or sentencing are not technically entitled to attend these classes under Israeli military law. However, negotiations between the Palestinian child prisoners’ representatives and the IPS resulted in an informal arrangement for their inclusion.

According to Defense for Children International - Palestine research, classes are offered five days a week in 45 minute periods. During the first few days after their arrival, children are tested and assigned a class schedule in leveled groups. As a result, children are not always educated with their peer group.

Child representatives and adult prisoner supervisors told DCIP that they enforce children’s attendance although the IPS has not made the classes mandatory. Abdul-Fatah Dawleh, the representative for Ofer’s juvenile section, told DCIP that children are only allowed to miss classes for family visits, court appearances, or illness.

Despite this, a 2015 DCIP survey of children detained in Megiddo found that children reported attending classes an average of two or three times per week. Child interviews suggested that children who scored in the lowest academic group or who were illiterate attended more classes than children in the “high” group. Some children who had completed most of their secondary education reported that there were no classes for their academic level.

Certified Israeli Arab teachers selected by the Israeli Ministry of Education provide the instruction in the prison classes. After the lessons, some children said they stayed in the classrooms to draw pictures and talk to their teachers.

This scant curriculum does not come close to approximating the Palestinian governmental school curriculum, which would typically offer 12 subject areas in the upper grades.

In accordance with the Palestinian Authority Ministry of Education’s regulations, a child must repeat the academic year if they miss more than 15 percent of the approximately 185 school days in the school year. However, under the guidelines, imprisonment is an excused absence, allowing a child to miss up to 30 percent of annual school days before he or she must automatically repeat the school year. Given that the prison educational program does not follow the Palestinian curriculum, all school days in prison are counted as absences. 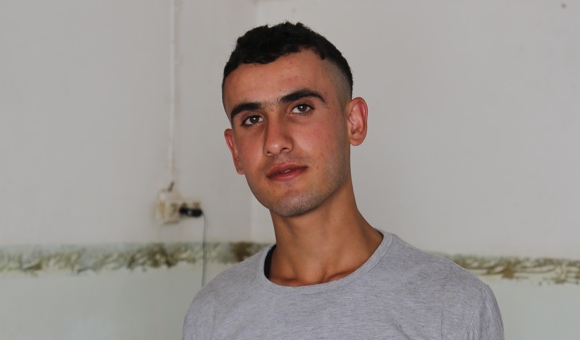 In addition to grade promotion, imprisonment presents a major obstacle for children preparing to take the Palestinian matriculation exam, the “tawjihi.” The tawjihi is a culmination of a two-year program of study and is typically taken in the final year of school.

“After the abduction of an Israeli soldier, Gilad Shalit, the Israel Prison Service decided to end their cooperation regarding education in Israeli prisons,” Sayaf Abu Saif, director of the education department at the Commission on Detainees and Ex-Detainees Affairs, told DCIP. “Minors are not provided with proper education and this also affected the possibility of applying to take the tawjihi inside prison.” According to Abu Saif, the Palestinian Ministry of Education is no longer able to monitor test administration inside Megiddo, which led to the ministry placing higher eligibility restrictions on child prisoners applying to take the exam. Consequently, few children under the age of 18 can now qualify to sit the tawjihi.

Raed Riyahi, the adult prisoner appointed to manage the juvenile section of Megiddo, has made it is his personal ambition to expand the educational opportunities available to the child prisoners he oversees. At the age of 18, Riyahi was convicted and sentenced to 15 years in prison for an offense he had allegedly committed as a minor. “I was young when I was arrested, and those who were older than me helped me out, and now it is my time to pay them back by helping out these children,” Riyahi told DCIP.

Among his goals are adding new subjects — English, science, geography and history — to the curriculum and increasing the number of children who sit the tawjihi exam each year. Riyahi told DCIP that of 30 applications submitted in 2015, only five children were approved to take the exam.

In sharp contrast, an IPS publication about Ofek prison from 2007 reported that 34 Israeli youths took the Israeli matriculation exam with 95 percent of test takers earning a passing score. One boy who was struggling to calm his nerves was permitted to take the exam with a parrot on his shoulder.

Based on information posted on the Israeli Ministry of Public Security’s website, education at Ofek prison appears to exceed Megiddo’s program on nearly every front. As laid out in a publications entitled “New Horizons” and “Ofek Animals newsletter,” Israeli child prisoners held at Ofek participate in a differentiated educational program that fully supports the emotional and academic needs of child detainees while preparing them to succeed in the Israeli matriculation exam.

The 2007 newsletter states that a staff of 38 teachers — all of whom were trained in special education — taught the 250 students held there at the time. Students are educated in leveled groups and screened for learning and behavioral disabilities. Classes take place in a “learning center” with a plethora of further opportunities for learning outside the classroom doors. Extracurricular educational and recreational activities mentioned included: Scouts, theater, music, art, meditation, and animal care — which takes place in Ofek’s own petting zoo.

The ability to reintegrate into a school system after release is one of the primary lenses through which international law measures a juvenile prisoner’s right to education. Under the General Assembly’s Resolution 45/113, a juvenile deprived of their liberty “shall be integrated with the educational system of the country so that after their release they may continue their education without difficulty.”

By this yardstick, Israel is not meeting its international law obligation to provide an adequate education for Palestinian child prisoners. This failure is particularly disturbing in light of Israel’s strongly demonstrated understanding and implementation of this same law toward Israeli children imprisoned in Ofek.

As lucidly stated in the IPS “New Horizon” newsletter: “‘There is a conceptual difference between Ofek and prisons for adults,’ notes Lieutenant Colonel Nili Itzkowitz, Ofek’s warden. ‘Here we relate to the inmates on an individualized basis. When we receive adolescents, we assign them to the place that is the most suitable for them and that will prepare them in the best possible way for the day they are released.’”

This is the third feature in a four-part series about Palestinian children’s experiences in an Israeli prison. The information in these pieces primarily draws from interviews and survey data conducted by DCIP staff. All children surveyed and interviewed were current or former prisoners at Megiddo between 2013-2015. The features also rely on information supplied by the Palestinian Ministry of Education, the Commission on Detainees and Ex-Detainees Affairs, the International Committee of the Red Cross, the current and past heads of the adult prisoner supervisory group for Ofer, Megiddo and Hasharon prisons, the YMCA Hebron Office, the Palestine Counseling Center, as well as statistics provided by IPS.