Ramallah, April 9, 2016—Taher’s parents learned their 16-year-old son had been arrested from a neighboring farmer, who witnessed the arrest. For a period of 18 hours, spanning June 25 and 26 of 2014, Taher’s parents could only guess as to their son’s whereabouts.

After Defense for Children International – Palestine lawyer Adnan Rabee confirmed that Israeli forces were detaining Taher, the family entered a long year of minimal contact with Taher, due to heavy restrictions imposed by the Israeli military court and prison systems. These practices violate international child protection laws twice over — first, by routinely removing children from their families and second, by creating undue obstacles to family contact during their detention.

Israel’s frequent and systematic practice of child detention violates its international law obligations to arrest and detain children only as a last resort. Article 37 of the Convention on the Rights of the Child additionally provides that children deprived of their liberty “shall have the right to maintain contact with his or her family through correspondence and visits, save in exceptional circumstances.”

Before his arrest, around 3 p.m., Taher said he was watering trees on his family’s farm in Qalqilya, on the western edge of the West Bank. According to sworn testimony collected by DCIP, Taher began to smell teargas. Moments later, four boys jumped the farm’s fence. As they ran past, they shouted, “‘Run, run, soldiers are chasing us!’” Taher said to DCIP. “I told them I had nothing to do with them. But I was scared, so I ran away.”

When Israeli soldiers apprehended Taher in his neighbor’s farm, they kicked and physically assaulted him with rifle stocks, according to Taher’s sworn testimony. He suffered wounds to his right eye, head, and arm that would require stitches, as well as bruising and abrasions on his ear. 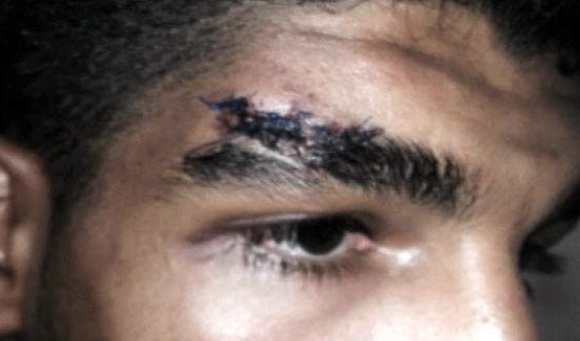 In the subsequent hours, Taher was transported to several different locations, instructed to remove his clothes, and strip searched down to his underwear. He was also interrogated without the presence of a lawyer or family member. By the time he received medical care at a military clinic, three hours later, Taher told DCIP that his clothes and blindfold were soaked with blood.

Around 3 a.m., on June 27, Taher reached Megiddo prison and was placed in the juvenile section. Megiddo is one of several detention and prison facilities located in Israel, where Palestinian child prisoners are illegally transferred and held in contravention of the Fourth Geneva Convention Article 76.

Additionally, the illegal transfer of Palestinian children into Israel impedes their contact with family members, who cannot cross the Israeli border without travel permits.

The first time Taher’s parents were able to see him was in Salem military court on June 29, four days after his arrest. Court restrictions mandated that only two family members could attend the hearing. Like most families, Taher’s parents sat on a wooden bench in an open-air waiting space outside of the security screening area, until their son’s case was called.

Inside the courtroom, family members are required to sit in the last row of benches, about 10 feet away from their child. They are prohibited from making any kind of physical contact with their child or bringing them items. Despite the ban on communication in the courtroom, most judges allow families to whisper quietly back and forth with their child during the proceedings, according to DCIP lawyer, Iyad Misk.

When Taher first entered the courtroom, he was shackled. His mother told DCIP that she cried when she saw him, wearing the shackles and visibly scarred. 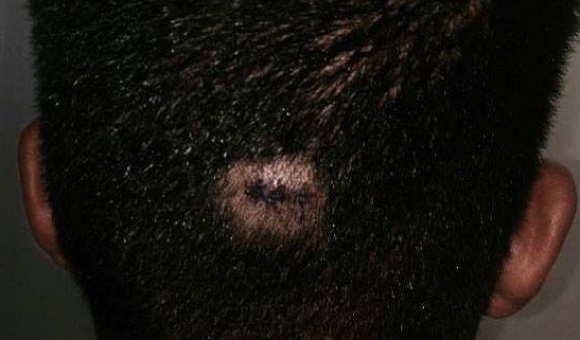 Two or three weeks after the first court hearing, parents typically receive a phone call from the International Committee of the Red Cross (ICRC) with their child’s “salamat,” or greetings. The ICRC delegates conduct confidential, one-on-one interviews with Palestinian child prisoners and document their stories. At the end of the interview, delegates collect the child’s salamat—a few lines about their overall health to share with their family. Taher’s parents told DCIP that they never received his salamat.

After Taher was sentenced to one year in prison on September 1, 2014, his family was able to formally apply for permission to cross the Israeli border and visit Taher in Megiddo prison. The ICRC coordinates the permit process through its Palestine Family Visits program, which is one of its largest visitation programs globally. According to the 2014 annual report, ICRC facilitated 51,000 family visits between Palestinians detained in Israel and their family.

Although the ICRC submits the applications, Israeli authorities enact all laws pertaining to family visits of children in Israeli prisons and must approve all permits. Only immediate family members are eligible to apply, unless there are exceptional circumstances. Formerly incarcerated persons are systematically denied visitation permits. Four of the 25 children surveyed had family members who were banned from visiting.

Taher’s family’s permit applications were repeatedly denied. For six and a half months, no family member was able to secure a permit. When a permit was eventually granted, Taher’s family received a multiple visit permit. It was then that they started to visit every two weeks. Based on children’s survey responses gathered by DCIP, the average time it took for a child to receive their first visitor was three months.

Although families with permits can travel alone, many opt to travel in the vans coordinated by the ICRC. Vans depart from central locations to transport families, often across multiple checkpoints. Some families travel for hours to reach an ICRC van’s designated departure location. During interviews with family members of child prisoners, some cited reduced likelihood of harassment as one of their reasons for using the ICRC vans. Previous instances of harassment recounted by families included visitation permits being destroyed or stamped with an exit stamp before the family could visit their child.

Security searches can also present a barrier to families who wish to visit their child in prison. Before entering the facility, each person must undergo a thorough search, which can sometimes take the form of a strip search. One mother, who brought her youngest child with her to visit his three siblings in prison, told DCIP, “My baby was searched, including his diaper.” When Taher’s older brother, Tariq, was finally able to visit him after 200 days, he told DCIP his security search was “humiliating.”

Once inside the prison, family members are able to speak with the child prisoner through a glass barrier. Each visit is allotted a maximum of 40 minutes. “After you finish hearing how they are, the visit is over,” Taher told DCIP.

Visitors are also allowed to bring approved items to the detainee, such as clothes, up to five photos without political symbols, and books. While preparation books for the Palestinian final matriculation exam (“tawjihi”) are usually allowed, DCIP’s lawyers report that the prison administration severely restricts the movement of other reading materials. All items are searched before being turned over. “When the clothes finally got to [Taher], they were damaged and items were missing,” Tariq told DCIP.

After their visit, the families wait to travel back together. Families surveyed by DCIP reported that it takes an average of two and half hours of travel to visit their child. Combined with the varying length of security checks, families are forced to put aside a large part of a day in order to achieve a 40-minute visit with their child. 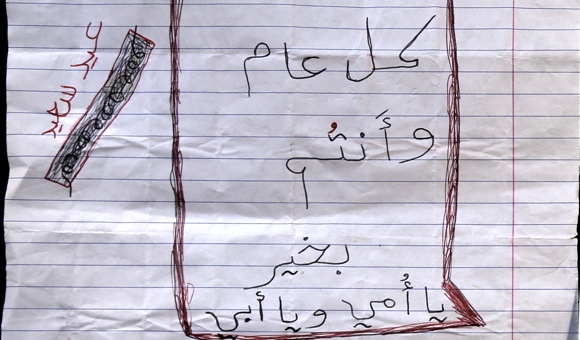 Apart from visits, children can write letters to their families through the ICRC. However, due to the fact that it can take up to 45 days for delivery, many children do not write.

In Megiddo, children are not allowed to use the phone, unlike in Israeli criminal prisons. The group of Palestinian adult prisoners who manage the juvenile section continue to advocate for phone access for children. In prison, children undergo emotional distress and often cry because of the lack of connection to their families. Thus far, the Israel Prison Service (IPS) has not granted children telephone access for security reasons, according to the former head of the National Prisoners’ Committee (NPC), Jamal al-Tirawi. 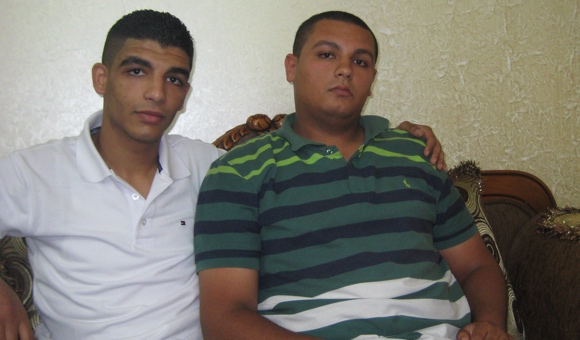 As Taher told DCIP, “The hardest part about being in prison is to be away from your family.” For Taher, this includes his older brother Tariq. One morning in June 2014, Tariq and Taher were together for breakfast, but by the afternoon Taher was gone. After a year, the brothers are happy to be reunited. While sitting together on the couch, Taher told DCIP, “You cannot imagine the relief of being home, until you experience it.”

This is the second of a four-part series about Palestinian children’s experiences in an Israeli prison. The information in these pieces primarily draws from interviews and survey data conducted by DCIP staff. All children surveyed and interviewed were current or former prisoners at Megiddo between 2013-2015. The features also rely on information supplied by the Palestinian Ministry of Education, the Commission on Detainees and Ex-Detainees Affairs, the International Committee of the Red Cross, the current and past heads of the adult prisoner supervisory group for Ofer, Megiddo and Hasharon prisons, the YMCA Hebron Office, and the Palestine Counseling Center, as well as statistics provided by IPS.