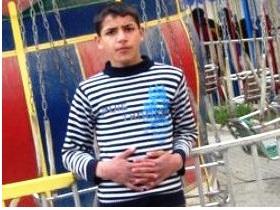 Israeli soldiers arrested Osama S (pictured right), 16, along with seven other teenagers during a night time raid on the West Bank town of Haris.

Ramallah, 17 March 2013—Israeli soldiers arrested eight Palestinian teenagers from their homes during a predawn raid on the northern West Bank town of Haris, near Salfit, on Friday.

The boys, ages 15 to 17, were transferred to interrogation and detention centers, with three of them winding up at Huwara, near Nablus, and two at al-Jalame, near Haifa, DCI-Palestine sources said. The whereabouts of the remaining three boys remained unconfirmed. The father of child detainee Rabea T, 17, said his son suffered from asthma and had never been arrested before.

“When heavily armed soldiers arrest children from their homes in the middle of the night, they replace their sense of safety and security with fear and isolation,” said Ayed Abu Eqtaish, Accountability Program director at DCI-Palestine. “The traumatic experience betrays the guiding principle of acting in the child’s best interests stated in the UN Convention on the Rights of the Child.”

Israeli forces also detained two other Palestinian youths in the nearby town of Kfil Haris while conducting a sweep of the area, according to news reports. DCI-Palestine was unable to independently verify their identity and age.

The arrests followed a traffic accident near the Jewish settlement of Ariel, south of Nablus, earlier that night, which injured six Israeli settlers, according to Israeli news sources. The settlers accused Palestinian youth of stone-throwing after spotting stones on the road, the reports said.

A report entitled “Bound, Blindfolded and Convicted” released by DCI-Palestine in 2012 found that, out of 311 sworn testimonies collected between 2008-2012, 60 percent of Palestinian children were arrested from the family home between midnight and dawn.

While there are no specific safeguards under international law that regulate the times at which a child can be arrested, DCI-Palestine recommends issuing a summons to appear at a police station during the day as a practical alternative to arresting children late at night.