Alaa Abdullah Riyad Qaddoum, 5, was killed around 4:30 p.m. on August 5 by an Israeli airstrike in the Shuja'iyya neighborhood of Gaza City, according to documentation collected by Defense for Children International - Palestine. The Israeli airstrike hit a group of people gathered outside Abu Samra mosque in the Wadi Al-Arayes area of Shuja’iyya neighborhood. Alaa’s six-year-old brother, Riyad, and father, Abdullah, were injured in the same attack.

“Israeli forces routinely use explosive weapons in densely populated civilian areas with complete disregard for the indiscriminate effects,” said Ayed Abu Eqtaish, accountability program director at DCIP. “There is no safe space in the Gaza Strip for Palestinian children and their families and they increasingly bear the brunt of Israel’s repeated military offensives.” 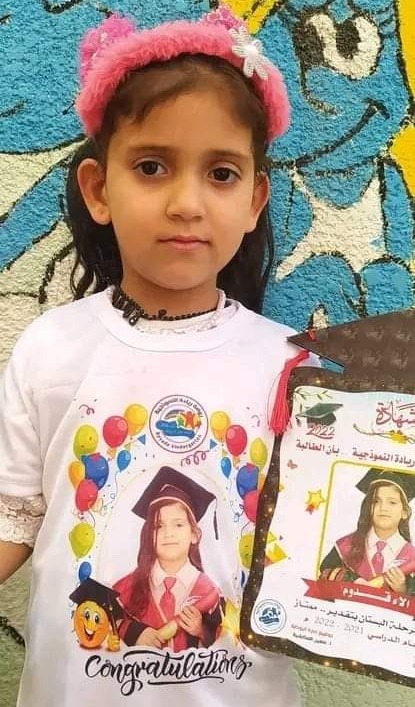 Alaa was killed instantly and sustained injuries to her forehead, chest, and right leg from shrapnel, according to a doctor at Al-Shifa hospital.

At least two other Palestinians were killed in the same attack, including Alaa’s 24-year-old cousin Yousef Salman Mohammad Qaddoum, according to information collected by DCIP.

Alaa is the 19th Palestinian child killed by Israeli forces in 2022, according to documentation collected by DCIP.

The Israeli military launched airstrikes across the Gaza Strip on Friday, killing at least ten people and injuring at least 55, according to the Palestinian Ministry of Health in Gaza. The Israeli military offensive comes days after Israeli forces arrested a senior Islamic Jihad leader in Jenin and killed 16-year-old Dirar Riyad Lufti Al-Haj Saleh, also in Jenin, who was protesting the Israeli military’s incursion into Jenin refugee camp.