Mohammad Moqbel, 16, lays in bed with his hands and feet shackled at Hadassah Ein Kerem hospital in Jerusalem. (Photo: Courtesy of the Moqbel family)

Ramallah, December 8, 2020—Israeli authorities transferred a 16-year-old Palestinian boy on Thursday directly to an Israeli prison from the hospital where he was recovering from surgery the day before for injuries sustained during his arrest.

Mohammad Muneer Mohammad Moqbel, 16, was detained by Israeli forces around 9 a.m. on November 29 from Arroub refugee camp, located north of the occupied West Bank city of Hebron. Moqbel sustained a broken jaw when an Israeli soldier struck him in the face with a rifle stock after he was already in Israeli custody, according to documentation collected by Defense for Children International - Palestine.

Mohammad had left home for school that morning but arrived to find his school closed. He returned home and later went out to the store, where he encountered Israeli forces firing tear gas and stun grenades in the camp. Mohammad sought shelter in a nearby house. An Israeli soldier followed him into the house and detained him, according to information collected by DCIP.

Mohammad told DCIP that an Israeli soldier struck him in the face with a rifle stock and then he was physically assaulted by at least three other Israeli soldiers for about 10 minutes.

“They slapped me and kicked me all over my body,” Mohammad told DCIP. “I had bruises on my back, knees, and shoulders. My mouth, jaw, and chin were bleeding. They also broke two of my teeth.”

Israeli forces placed Mohammad in the back of a military vehicle on the metal floor alongside three other Palestinian children detained during the raid. They were transferred to Karmei Tzur, an illegal Israeli settlement two miles south of Arroub camp. During the transfer, Israeli soldiers subjected Mohammad and the other children to physical violence and insults, according to information collected by DCIP.

Mohammad was detained, bound and blindfolded, on the ground for two hours at Karmei Tzur, and then transferred to Israel’s Etzion interrogation and detention center.

Despite a bloodied face and injured jaw, he was not provided with any medical treatment and was subject to two interrogation sessions without the presence of a family member or a lawyer. Israeli interrogators accused him of throwing stones and Molotov cocktails at Israeli forces.

After his second interrogation session ended around 6 p.m., Israeli forces detained Mohammad outside, bound and blindfolded, for close to six hours. He was brought indoors around midnight.

Israeli forces transferred Mohammad to Hadassah Ein Kerem hospital in Jerusalem around 3 a.m. on November 30. Doctors examined and X-rayed his jaw and confirmed it was broken. Doctors operated on Mohammad on December 2 inserting four screws and platinum to reconnect his jaw and broken teeth.

Mohammad’s detention was extended for a period of six days on December 1 by a military judge at Israel’s Ofer Military Court so an indictment could be filed against him, according to Iyad Misk, a DCIP lawyer providing legal representation to Mohammad. Mohammad was subsequently charged by a military prosecutor with throwing stones and Molotov cocktails.

Israeli forces shackled Mohammad's hands and feet while he was recovering in bed and placed his hospital room under guard. 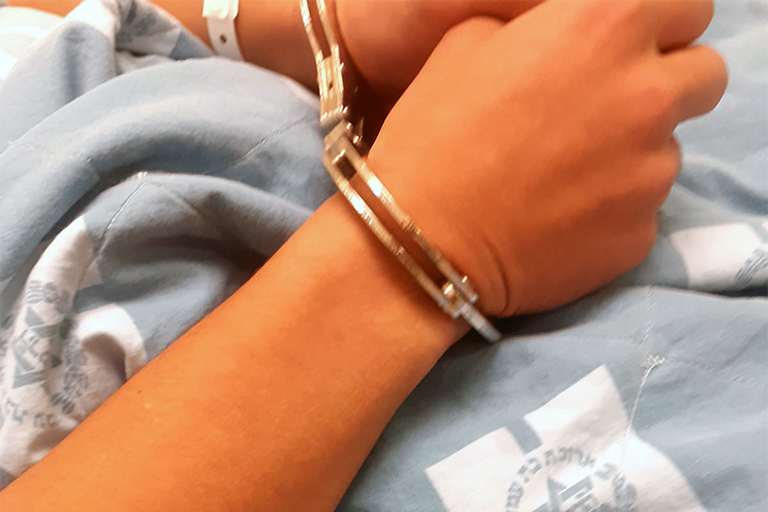 On December 3, Mohammad was transferred to Israel’s Megiddo prison located inside Israel, north of the occupied West Bank. While a bail request was granted on December 6, he remains in pretrial detention at Megiddo prison as the Israeli military prosecutor has appealed the decision. The next hearing before Israel’s Military Court of Appeals is scheduled for December 10.

Physical violence and ill-treatment of Palestinian child detainees is widespread and institutionalized in the Israeli military detention system, according to evidence collected by DCIP.

International law and norms require law enforcement officers to use reasonable and proportional force to carry out a lawful arrest. International juvenile justice standards, which Israel has an obligation to implement after ratifying the United Nations Convention on the Rights of the Child in 1991, include an absolute prohibition against torture and other cruel, inhuman, or degrading treatment or punishment.

In October, Amer Abdel-Rahim Snobar, 16, was beaten and killed by Israeli soldiers near the occupied West Bank village of Turmus’ayya. An autopsy found that he likely died from asphyxiation as a result of strangulation, according to information collected by DCIP.

The United Nations Committee against Torture, an independent body that monitors the implementation of the U.N. Convention against Torture, has concluded that the use of excessive force by law enforcement or military personnel may amount to torture and ill-treatment. When determining if certain acts constitute torture, the child’s age must be taken into account.