Physical violence and ill-treatment of Palestinian child detainees is widespread, systematic, and institutionalized in the Israeli military detention system, according to evidence collected by DCIP. (Photo: Ahmad Al-Bazz / DCIP)

Israeli forces threatened to shoot or hang 13-year-old Fadi O. during an interrogation on February 8 at Huwwara military base in order to extract information. In a separate incident, an Israeli interrogator extinguished his cigarette on 15-year-old Hassan M.’s* arm, burning him, on February 22 at Megiddo prison inside Israel.

Physical violence and ill-treatment of Palestinian child detainees is widespread, systematic, and institutionalized in the Israeli military detention system, according to evidence collected by DCIP.

Palestinian children detained and prosecuted in the Israeli military detention system are subjected to physical violence, hand and leg ties, blindfolding, stress positions, strip searches, and other forms of ill-treatment, according to documentation collected by Defense for Children International - Palestine. Israeli forces regularly detain Palestinian children from their homes in the middle of the night, do not properly inform children of their rights, interrogate children without the presence of a family member, and force children to sign documents in Hebrew, a language most Palestinian children don’t understand, according to documentation collected by DCIP. 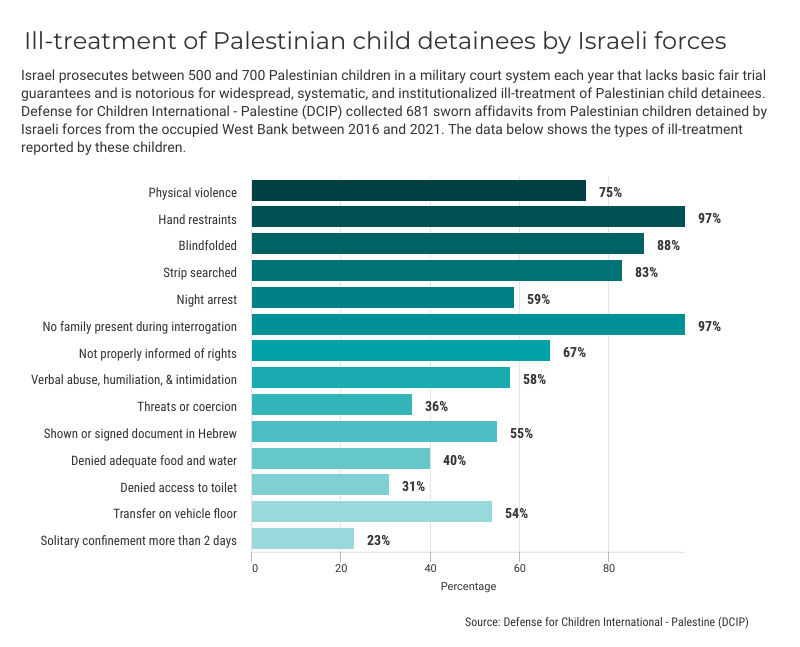 “Israeli soldiers frequently use excessive force without justification when detaining Palestinian children,” said Ayed Abu Eqtaish, accountability program director at DCIP. “Israeli forces know that systemic impunity will allow them to continue to torture and ill-treat Palestinian children without ever being held accountable.”

Military law has applied to Palestinians in the West Bank since 1967, when Israel occupied the territory following the Six Day War. Jewish settlers, however, who reside within the bounds of the West Bank, in violation of international law, are subject to the Israeli civilian legal framework. Accordingly, Israel operates two separate legal systems in the same territory. Palestinian children who live in Jerusalem generally fall under Israeli civilian law.

International law and norms require law enforcement officers to use reasonable and proportional force to carry out a lawful arrest. International juvenile justice standards, which Israel has an obligation to implement after ratifying the United Nations Convention on the Rights of the Child in 1991, include an absolute prohibition against torture and other cruel, inhuman, or degrading treatment or punishment.

“I'll shoot you with this when we get there.”

Israeli forces threatened to shoot or hang 13-year-old Fadi, a resident of Odala, a village south of Nablus in the northern occupied West Bank, in order to extract information and confessions from him about Palestinian stone throwers.

Israeli forces detained Fadi on February 8 while he was returning home from the grocery store around 7 p.m., according to documentation collected by DCIP.

"I was with my 13-year-old friend when we heard a young man shouting that there were [Israeli] soldiers in the area. Then, I noticed one of the soldiers running after us, and he started shooting in the air and shouted 'stop, stop' in Arabic, but I had to run away because I was really scared of him. He managed to catch me, while my friend managed to escape,” Fadi said.

The Israeli soldier grabbed Fadi by his shoulder and began insulting him, Fadi told DCIP. Then the soldier kicked Fadi and dragged him about 30 meters (98 feet) to an area with four Israeli military vehicles and dozens of soldiers, he said. The soldier forced Fadi to kneel on the ground and raise his hands for about ten minutes, Fadi told DCIP.

“Many local residents arrived and tried to free me, but the soldier who caught me fired several shots in the air to scare them off,” Fadi said. He said the soldier’s bullet casings fell onto his leg. “The other soldiers fired eight tear gas canisters and stun guns to keep [the local residents] away.”

"After that, the soldier dragged me to one of the military vehicles, tied my hands in front of my body with a plastic cord and made me sit on a plastic chair behind the driver's seat,” Fadi told DCIP. “The vehicle took off, and the soldier threatened to shoot me. He even pointed his rifle at me while driving and said in Arabic, 'I'll shoot you with this when we get there.'” The soldier driving the truck also threatened to shoot him, Fadi told DCIP.

"Two soldiers questioned me inside the Israeli military vehicle in Arabic," Fadi said. "’Either you tell us who's throwing stones or prepare yourself to be hanged,’ the driver said to me in Arabic. "’I swear to God I don't know,’ I answered them while I was trembling." 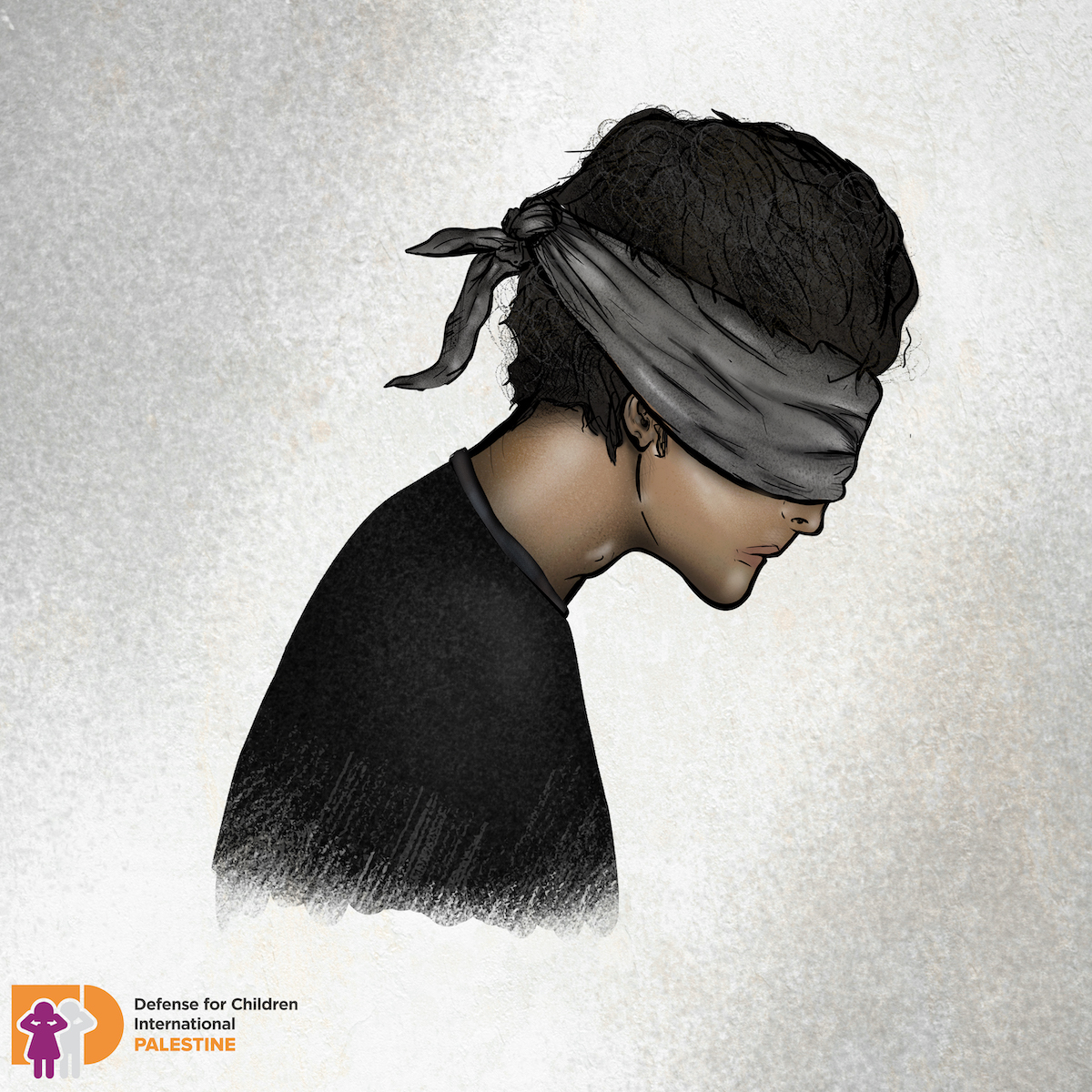 A few minutes later, they arrived at Huwwara military base about three kilometers (two miles) north of Odala. “The soldier got me off and took me to a large yard, and it was very cold. He pulled me hard by my shirt and sat me on the ground for about 10 minutes,” Fadi told DCIP.  “He also blindfolded me with a piece of cloth, but I was able to see a little. He removed his bullet magazine and cocked his rifle while pointing it to my head to intimidate me. Then he brought a plastic chair and sat me on it."

"The soldier threatened to shoot me if I did not tell him who threw stones and Molotov cocktails at them,” Fadi told DCIP. “He questioned me under threat and intimidation for a few minutes, while other soldiers smelled my hands to see if they smelled like flammable substances [used to make Molotov cocktails] and threatened to put me in prison for many years if I did not confess.”

"The tie was so tight that I screamed in pain and told them my hands were hurting,” Fadi explained. “I told them I was cold, but they did not care and kept trying to get a confession from me for about two hours. The soldier who arrested me had his rifle pointed to my head the whole time. Finally, they loosened up the tie a little and sat me on a seat outside a room. One of them opened the door of the room and hit me on my back, and I felt so much pain."

Israeli forces released Fadi to his uncle around 11 p.m. at the entrance to Huwwara military camp. No charges were filed against him. "I am still tense and scared that they may arrest me again," Fadi said.

In a second case, an Israeli soldier extinguished a cigarette on 15-year-old Hassan’s arm during an interrogation. The boy, who is from Al-Araqa, a village 15 kilometers (10 miles) west of Jenin in the northern occupied West Bank, was detained on February 18, while he and a friend were on his family’s agricultural land, near the separation barrier that is built on land belonging to the village.

Hassan told DCIP that an Israeli military vehicle chased after him and his friend while they were in the land that is about 200 meters (656 feet) from the separation barrier.

"We felt really scared and ran away in different directions,” Hassan said. “The vehicle kept chasing me and tried to run over me. I ran into agricultural land and then to the road leading down to my house, but then I saw another military vehicle rushing towards me from the other direction. I ran away, and the soldiers tried to run me over for the second time. I stopped running and hid behind a large rock on the side of the road,” Hassan told DCIP.

“The military vehicle stopped, and one of the soldiers got off and saw me,” Hassan said. “I tried to escape, but he hit me with a large rock on my back from a distance of about five meters (16 feet) and knocked me down."

"He caught me and started slapping me and hitting me all over my face and head for about five minutes. He then dragged me to the military vehicle, which was about 15 meters (49 feet) away,” Hassan told DCIP.

After they arrived at an army camp, Hassan was taken to a yard and forced to stand for about two hours, before he was taken inside to a room and seated on a metal bench for another four hours.

Israeli forces then blindfolded and handcuffed Hassan again and forced him onto the floor of an Israeli military vehicle, which transferred him to Megiddo prison inside Israel. The drive lasted for about eight hours and included many stops, Hassan told DCIP. He arrived at Megiddo prison around 6:30 a.m. on February 19.

"I was detained in a small room,” Hassan said. “It had three surveillance cameras and a metal bench, but there were no blankets, bedding, or lights.”

A few hours later, Israeli forces handcuffed and blindfolded Hassan before taking him to an interrogation room, Hassan told DCIP.

An Israeli interrogator removed Hassan’s handcuffs and blindfold and verbally and physically abused him for about an hour, Hassan told DCIP.

Hassan told DCIP that on February 20 he was taken to another room where he had a court session via video, and his detention was extended to February 24.

On February 22, Israel forces handcuffed and blindfolded Hassan and transported him in a military vehicle to an interrogation center about 30 minutes away.

"The interrogator accused me of throwing stones, but I denied it, so he started yelling and put out his burning cigarette on my right arm before leaving the room,” Hassan told DCIP. 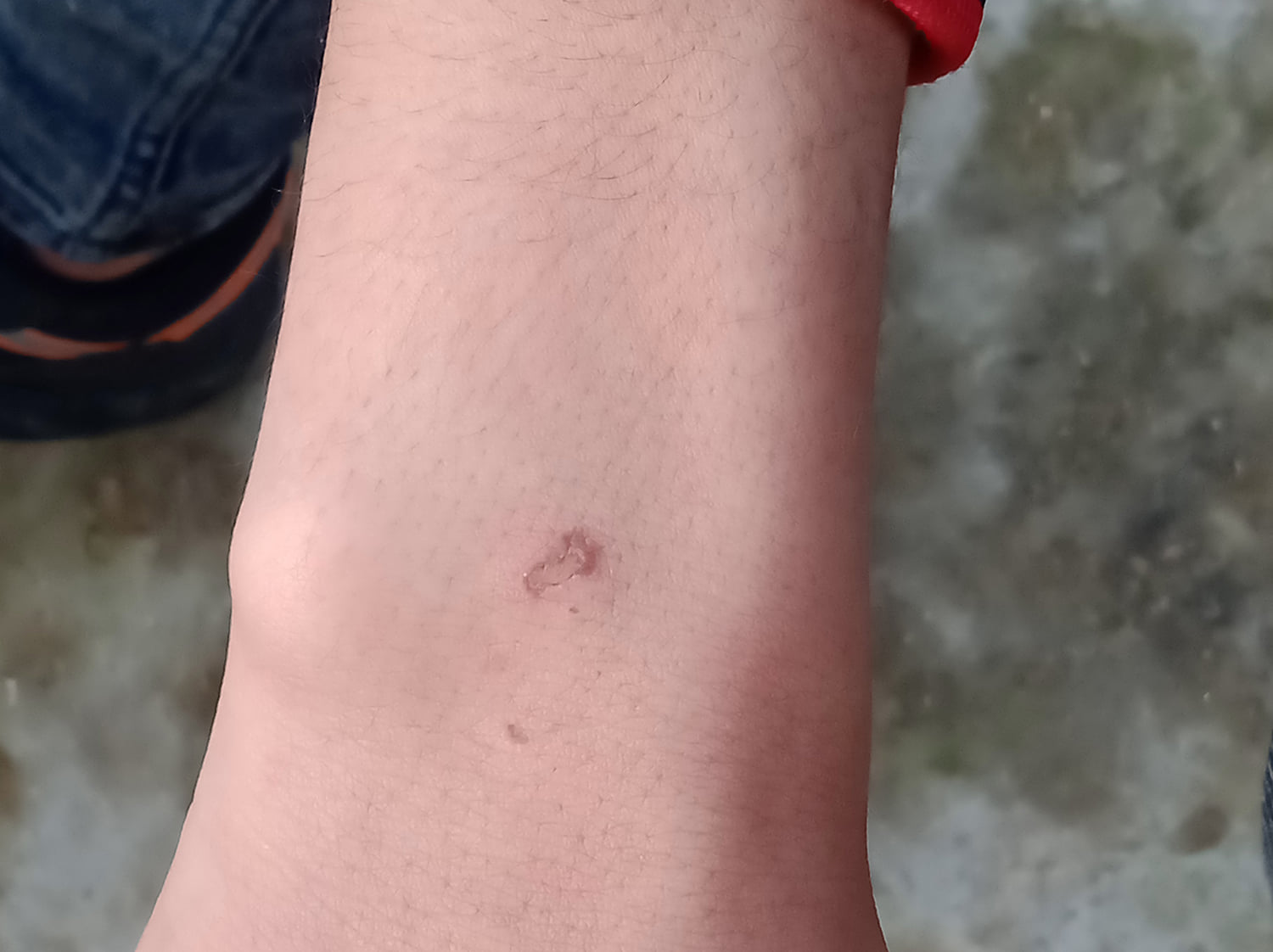 Israeli forces continued interrogating Hassan for another hour before transferring him back to Megiddo prison inside Israel, according to documentation collected by DCIP.

*Hassan M.’s name is known to DCIP but anonymized here to protect his privacy and safety.