A screenshot from video footage shows Abdel-Rahman, 15, lying on the ground with flames and smoke rising from his head. (Photo: DCIP)

Abdel-Rahman al-Dabbagh, 15, was struck in the forehead above his left eye around 7 p.m. on September 9 with an illumination flare cartridge that ignited, setting him on fire and killing him. Israeli forces fired live ammunition, tear gas canisters, and flares at protesters gathered at the border fence from approximately 2:30 p.m. until sunset, Mohammad I., an eyewitness, told Defense for Children International - Palestine. Abdel-Rahman and other Palestinian youth threw stones toward Israeli forces on the other side of the border fence, as well as some unexploded tear gas canisters previously fired by Israeli forces at the protestors.

Around 7 p.m., an Israeli soldier on the other side of the border fence knelt down and fired a flare cartridge directly at Abdel-Rahman, Mohammad told DCIP. Abdel-Rahman was approximately 15-20 meters (50 - 65 feet) from the border fence when he collapsed to the ground and caught on fire, according to Mohammad.

“He was hurt on the left side of his face, near the left eyebrow, after the flare directly hit him," said Mohmmad. "There was blood on his hands and chest, and coming out from above his left eye. There was a big, black hole above his eye.”

As the flare burned out, Mohammad and others ran to Abdel-Rahman and carried him to an ambulance. Paramedics were unable to resuscitate him. Abdel-Rahman was taken to Shuhada’ al-Aqsa hospital and pronounced dead upon arrival. 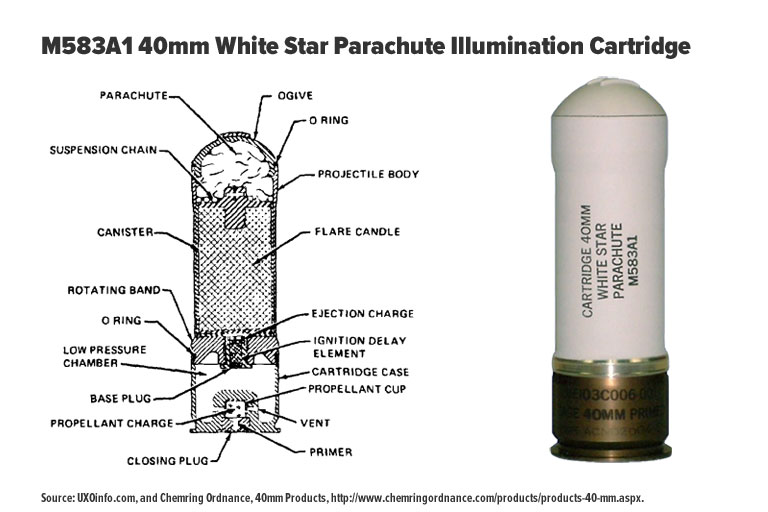 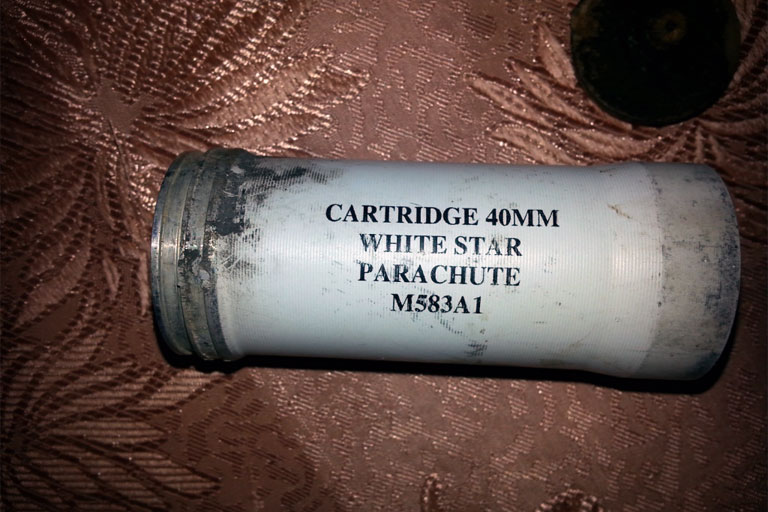 Markings on the flare fired by Israeli forces that afternoon reveal that it is a 40mm M583A1 White Star Parachute Illumination Cartridge, a parachute-suspended pyrotechnic projectile fired from an under-barrel grenade launcher rifle attachment. It is designed to illuminate an area of 200 meters (656 feet) in diameter, or to mark a military target on the ground. The projectile is produced by Chemring Ordnance and AMTEC Corporation, both US-based munitions company.

The flare has a built-in 4 to 5 second delay before the flare ignites and then burns for approximately 40 seconds. The flare measures approximately 13 cm (5.2 inches) and weighs 0.22 kg (0.49 lb). It is in the 1.4G hazard class, equivalent to a consumer firework.

An X-ray image shared with DCIP is consistent with this description and appears to show the flare punctured and lodged in Abdel-Rahman’s skull above his left eyebrow.

Video footage obtained by DCIP captured the moments after Abdel-Rahman was struck by the flare. It shows Abdel-Rahman lying on the ground with flames and smoke rising from his head. Two Israeli military vehicles and at least seven Israeli soldiers can be seen stationed on the Israeli side of the border fence. After the flare burns out, others at the scene carry Abdel-Rahman's body away from the border fence. A charred puncture hole and massive bleeding are clearly visible on Abdel-Rahman’s forehead.

The footage shows that the incident took place as the sun was setting, when there was still adequate daylight, making the use of an illumination flare unnecessary.

An Israeli military statement following the incident claimed Israeli forces could not be responsible, since soldiers deployed in the area had only used tear gas to quell the protest.

In a separate incident, on September 16, Israeli soldiers shot F.M., 17, with live ammunition during clashes in the same area near Gaza’s border fence. F.M. sustained a serious injury that may prevent him from using his left leg again.

According to his sworn testimony, F.M. had been participating in clashes earlier but was not throwing stones at the time he was shot. F.M. sustained a life-altering injury to his pelvis and upper left thigh, as well as damage to a nerve in his left leg and ureter, the duct that passes urine from the kidney to the bladder. Doctors are still determining whether he will walk again.

The area where Abdel-Rahman was killed and F.M. was wounded is known as the “buffer zone,” and is the site of frequent clashes. In 2005, Israel unilaterally declared a long strip of Palestinian territory along the Gaza-Israel border a “no-go zone,” illegally restricting Palestinians from accessing their own lands. The exact range of the buffer zone is unclear and Palestinians often only know they have strayed into the buffer zone when Israeli soldiers across the border fence fire at them.

Accountability for shootings by Israeli forces is extremely rare, and Israel routinely defends or denies using lethal force against children. Only one incident, the fatal shooting of Nadeem Nawara, 17, by an Israeli border policeman in May 2014, has resulted in an investigation and indictment. The trial of the border policeman is currently ongoing.

Since October 2015, five Palestinian children have been killed in Gaza and another 52 killed in the West Bank, including East Jerusalem, all but four at the hands of Israeli forces. According to the United Nations Office for the Coordination of Humanitarian Affairs (OCHA), 177 Palestinians have been injured by Israeli forces in Gaza so far this year.