Ramallah, February 2, 2018—A 16-year-old shot in the head with a rubber-coated metal bullet Tuesday was the fourth Palestinian child killed by Israeli forces in January, a month marked by high rates of live ammunition injuries among minors in the Occupied Palestinian Territory.

Israeli soldiers shot a rubber-coated metal bullet from close range at Laith Abu Naim from the inside of a military vehicle in the central West Bank village of Al-Mughayyir, according to eyewitness accounts collected by Defense for Children International - Palestine. The child was throwing a rock at the forces’ vehicle when he was shot, and died shortly after. DCIP also documented six additional children injured at the hands of Israeli forces by live ammunition and crowd control weapons in January.

“Israeli forces are disregarding Palestinian children’s lives and the international laws that were put in place to protect them,” said Ayed Abu Eqtaish, Accountability Program director at DCIP. “Their use of live ammunition in circumstances unjustified by international law and routine misuse of crowd control weapons are coming at a grave cost to children, which should be unacceptable to all.”

Eyewitnesses who wished to remain anonymous told DCIP that Israeli forces raided Al-Mughayyir around 4 p.m. after youth threw stones on a road connected to a nearby settlement.

Laith threw a stone at a military jeep, according to the witness, and was about to throw another stone when forces shot him from a distance of approximately 25 meters (82 feet).

“[Laith] was shot from inside the smaller jeep,” the eyewitness added. “The soldier opened the window and opened fire.”

Doctors told a witness that the rubber-coated metal bullet entered the left side of Laith’s forehead, settling in his brain. Doctors at the Palestine Medical Complex in Ramallah attempted to revive the child but he was pronounced dead shortly after.

The Israeli military told the Associated Press that it used “riot dispersal means” to respond to a “violent riot” composed of dozens of Palestinians burning tires and throwing rocks at Israeli forces.

Israeli forces’ own regulations state that rubber-coated metal bullets must only be fired at lower extremities from a distance between 50 and 60 meters (164-197 feet), and should never be aimed at children, according to B’Tselem. 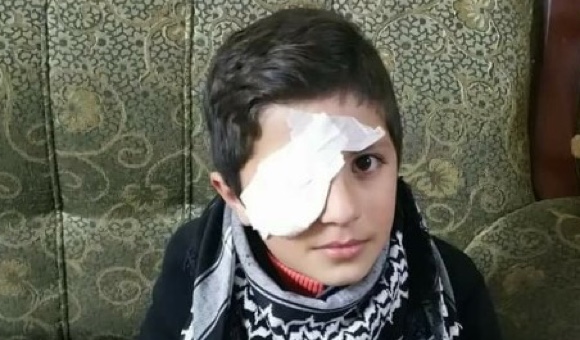 Despite these regulations, Israeli forces shot Ahmad Awais, 9, in the eye with a rubber-coated metal bullet during clashes on January 19 near the West Bank city of Nablus. Ahmad was treated for corneal scratches and internal bleeding in his eye but is expected to regain full vision.

DCIP documented repeated misuse of “less lethal” crowd control weapons by Israeli forces on children last year, which can cause death or permanent injury in children.

Among these was Mahmoud Obeid, 15, who was seriously injured on January 19 when he passed through a narrow gap in a concrete wall at Karni crossing, near the northern Israel-Gaza border. 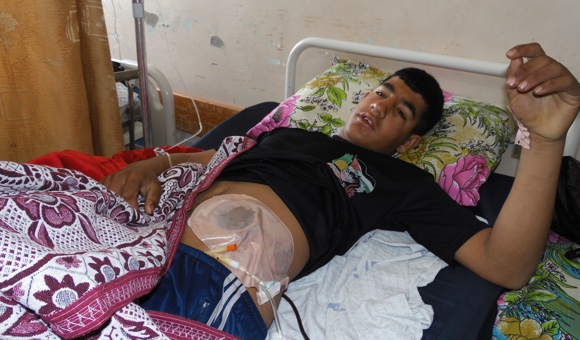 “I heard the sound of something opening, like a window. I looked and saw an opening in a wall,” Mahmoud told DCIP.  “A ‘weapon’ came out of the opening, directed at me.”

“I didn’t hear anything but the sound of one live bullet. I immediately felt something hit my stomach. I raised my shirt and saw a two centimeter (0.8 inch) wide hole in my stomach and blood was coming out.”

Doctors told Mahmoud the bullet entered his lower stomach and caused a minor pelvic fracture. He was hospitalized for six days with severe damage to his digestive system.

The four other children were all injured with live ammunition in the context of clashes with Israeli forces.

On January 24,  Israeli forces shot a 14-year-old during confrontations in the Nablus-area town of Burqa in the West Bank. The child was walking when Israeli forces shot him in the neck from inside of a military vehicle from a distance of around 90 meters (295 feet). He is currently in stable condition. 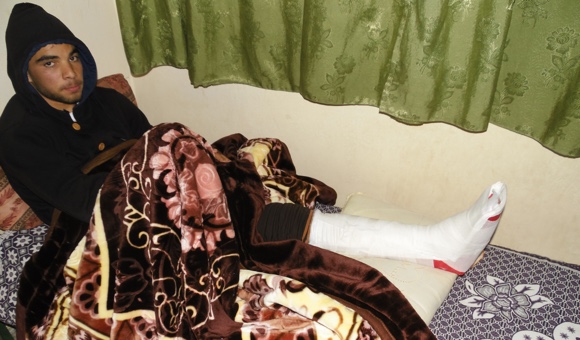 Between January 11 and 12, Israeli forces shot and moderately injured three teens in the lower body, Sami Fatuh, 17, Abdullah al-Najjar, 16, and Ahmad al-Najjar, 17, during separate incidents. The teens told DCIP they were taking part in clashes in border areas of the Gaza Strip when they were shot with live ammunition by Israeli forces stationed across the border.

In addition to Laith, Israeli forces killed Amir Musaad, 15, and Ali Qinu, 17, and Musab Tamimi, 16, in January. All three were shot by live ammunition in the context of clashes. DCIP documentation did not suggest that any of the teens posed a serious or mortal threat at the time they were killed. 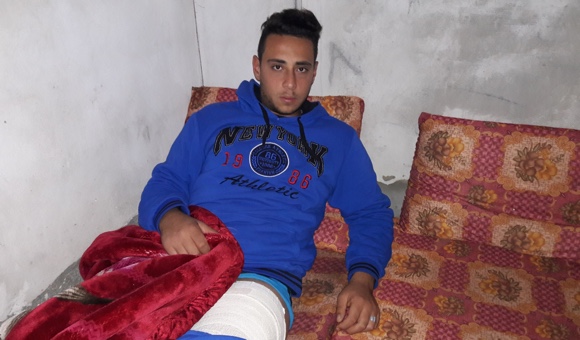 Their deaths came in a month marked by high injuries from Israeli forces. The United Nations Office for the Coordination of Humanitarian Affairs reported that Israeli forces injured 150 children between January 2 and 29 with live ammunition, rubber-coated metal bullets, tear gas inhalation, or tear gas canisters.

Since December 2017, there has been a spike in injuries to children. Heightened levels of violations were carried out when Israeli forces used widespread force to quash demonstrations launched across the OPT in response to U.S. President Donald Trump’s recognition of Jerusalem as Israel’s capital.