Ramallah, February 9, 2017—Clashes with Israeli forces near the West Bank city of Jenin on January 29 left one Palestinian youth dead and five others injured, including a 17-year-old who sustained a gunshot wound to the back.

The Israeli army conducted a predawn raid on Jenin refugee camp in the northern West Bank, which led to heavy confrontations with camp youth, Defense for Children International – Palestine sources said. Mohammad Mahmoud Abu Khalifa, 19, sustained a fatal gunshot wound, while Islam Fayeq Hussein Debayah, 17, was hit with a bullet in the upper part of his body.

In a sworn testimony to DCIP, Islam said, “I turned around to escape when suddenly the soldier aiming his weapon at me fired and I was hit directly in the back.” He added, “I started to feel faint and my stomach was bleeding. I lifted my clothes and my intestines had spilled out of my stomach, and I held them with my hands.”

A private car transported the wounded teenager to Jenin Government Hospital, where he underwent emergency surgery, and remained in a critical condition in the intensive care unit for three days. Islam, who remains in the hospital, said doctors informed him the bullet entered the left side of his lower back and exited the left side of his abdomen, severing an artery.

Another four youths, all 18 years old and above, sustained gunshot wounds to the lower part of their bodies, DCIP sources said. DCIP considers all persons below the age of 18 to be children in accordance with the United Nations Convention on the Rights of the Child. 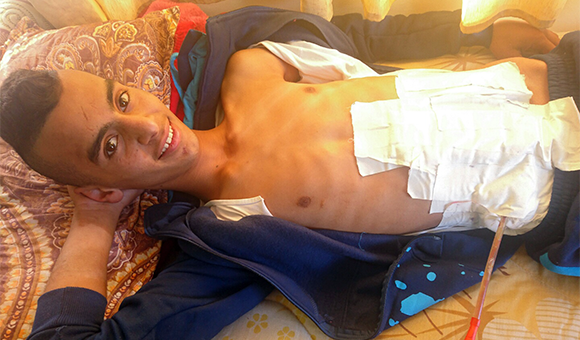 According to the United Nations Relief and Works Agency for Palestine Refugees in the Near East (UNRWA), “Israeli and Palestinian security forces conduct regular operations in the camp that often result in clashes and violence,” which has “had a significant impact on the emotional and psychosocial well-being of young children especially.”

In 2016, DCIP documented three Palestinian child fatalities from the Jenin governorate at the hands of Israeli forces last year. All three allegedly carried out some type of attack against Israeli soldiers.

According to DCIP research, 2016 was the deadliest year for children in the West Bank, including East Jerusalem, with 32 fatalities at the hands of Israeli forces and security guards recorded.

Across the West Bank, 103 Palestinian children sustained live ammunition injuries last year, according to the United Nations Office for the Coordination of Humanitarian Affairs.

Accountability for shootings by Israeli forces is extremely rare. Only one incident, the fatal shooting of Nadeem Nawara, 17, in May 2014, has resulted in both an investigation and indictment.