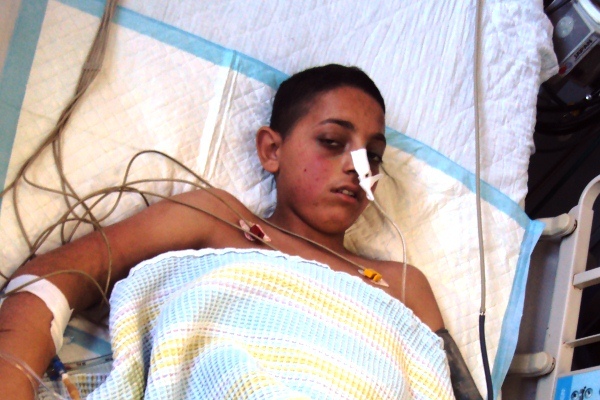 Ramallah, 5 March 2013—Israeli soldiers shot and seriously injured two Palestinian teenagers at the entrance to Aida refugee camp near Bethlehem late February during separate clashes with demonstrators over the death of a Palestinian in Israeli custody.

The first victim, identified as Odai Nael Fathi Saleh, 15, sustained a gunshot wound to the head and was reported to be in critical condition at Hadassah hospital, DCI-Palestine sources said. Mohammad Khalid al-Kurdi, 14, the second victim, suffered injuries to his liver, right lung and right leg, according to a medical report obtained by DCI-Palestine. Mahmoud Ibrahim Khalil, head of surgery at Beit Jala Hospital, said he will operate on Mohammad in the coming days to remove a bullet lodged near his mid-back.

“It is extremely troubling that Palestinian children continue to be injured and killed from Israel’s use of violent crowd control methods,” said Ayed Abu Eqtaish, Accountability Program director at DCI-Palestine. “The recent demonstrations have resulted in an increase in injuries to children, as well as arrests. Israeli authorities must take all necessary precautions to avoid injuring children.”

On the evening of February 24, Odai and his younger brother, Amir, 14, wound up in the middle of a confrontation between Palestinian protesters and Israeli soldiers while leaving the refugee camp on their way home to Bethlehem. As the soldiers drew closer to the crowd, Amir told DCI-Palestine he started running for safety before looking back to see his brother lying motionless on the ground. Two soldiers dragged Odai to a military guard tower near Rachel’s Tomb that overlooks the camp from where an ambulance transferred him to hospital.

Around 2 pm the following day, Mohammad, found himself in the cross hairs of Israeli soldiers dispersing dozens of stone-throwing Palestinians near the camp entrance when he was shot, DCI-Palestine sources said. Nearby youth carried him to a private car that took him to the local hospital, according to an eyewitness.

Palestinians have held several demonstrations over the past few weeks across the Occupied Palestinian Territory in support of Palestinian prisoners on an extended hunger strike. Clashes between Palestinian youth and Israeli forces intensified following the death of detainee Arafat Jaradat in Israel’s Meggido prison amid allegations of torture.

DCI-Palestine has documented several cases of children getting caught up in the latest round of violence, as Israeli soldiers attempt to disperse demonstrations across the West Bank, including a 9-year-old boy allegedly used as a human shield by Israeli soldiers. Several teenagers endured physical assault during their arrest while participating in demonstrations turned clashes. In one incident, Israeli soldiers brutally beat a Palestinian youth who ended up with a broken nose and thumb in addition to contusions all over his body.

A report entitled “Bound, Blindfolded and Convicted” released by DCI-Palestine in 2012 found that, out of 311 sworn testimonies collected between 2008-2012, 75 percent of Palestinian child detainees experience ill-treatment during arrest, interrogation and pretrial detention. The majority of the cases occur within 48 hours after an arrest and prior to a child’s first appearance before a military court judge.