Ramallah, February 15, 2018—Israeli forces injured four Palestinian teenagers over the past two weeks with live ammunition during protests along the Gaza Strip border.

“Israeli forces, including those stationed behind a border fence or inside watchtowers, are employing live ammunition against children, frequently and routinely,” said Ayed Abu Eqtaish, Accountability Program director at DCIP. “Often, the circumstances are such that other means could have been used, sparing children bodily harm and long term injuries.”

Akram told DCIP that Israeli forces stationed in a watchtower near the Gaza Strip’s northern border opened fire toward him when he was throwing stones.

A bullet passed through his right thigh. The injury left an 8-10 cm (3-4 inch) opening and caused serious damage to his femur, arteries, and nerves before exiting through his left thigh. Akram is undergoing extensive medical treatment in Shifa hospital.

In a separate incident, Khalil was running away from the border during clashes east of Jabalia in the northern Gaza Strip when he was shot in the right thigh by forces stationed across the border. He was hospitalized for five days for a bone fracture. 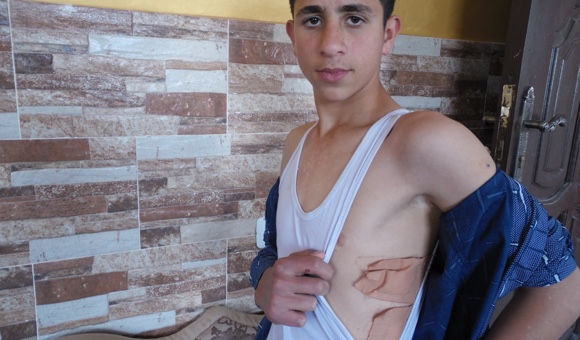 One week earlier, on February 2, Arkan was participating in clashes near the Israel-Gaza Strip border east of Jabalia, when he was shot with live ammunition. “I bent over to pick up a stone from the ground when I heard the sound of one live bullet,” Arkan told DCIP. “I felt something under my left armpit between my back and my chest. It felt as hot as boiling oil.”

On the same day, Thaer told DCIP he went to the border area to throw stones near an Israeli military base east of his Khan Younis-area hometown, in the southern Gaza Strip. Around 5 p.m., he was running away from the border when he slipped and fell.

“When I rose, I looked toward the border and saw a soldier on top of a truck pointing his gun in my direction. I heard the sound of one live bullet and I fell to the ground,” Thaer said. 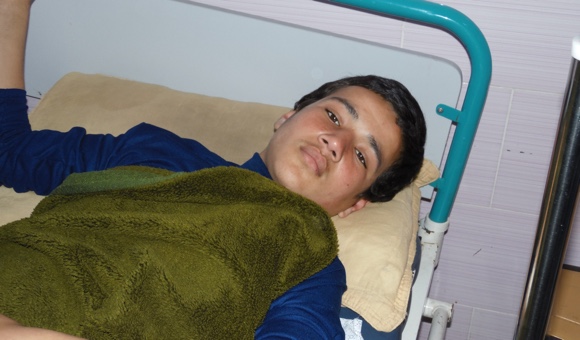 The bullet entered Thaer’s left lower back and exited his upper left thigh. Doctors told DCIP the injury fractured his left hip and caused nerve damage that may result in permanent paralysis. Thaer currently has no function in his left leg.

DCIP has documented a total of 10 cases of Palestinian children injured by live ammunition at the hands of Israeli forces along the Gaza Strip border with Israel between January 1 and February 14.  In addition, five Palestinian children were injured, also in the border area, by live ammunition in December 2017. In most cases, children reported that Israeli forces opened fire from behind a barrier or fence, or from inside of a watchtower, according to DCIP documentation.

The border area, often referred to as the “buffer zone,” is a site of frequent danger for Palestinian children in the Gaza Strip. In 2005, Israel unilaterally declared an area of Palestinian territory along the Gaza-Israel border a “no-go zone,” restricting Palestinians from accessing their own lands. The exact range of the buffer zone is unclear and Palestinians often only know they have entered the area when they encounter Israeli fire.

Across the Occupied Palestinian Territory (OPT), the number of Palestinian children to face injury at the hands of Israeli forces saw a spike since December. Forces used widespread force, including live ammunition,  to quash widespread Palestinian protests launched following U.S. President Donald Trump’s recognition of Jerusalem as Israel’s capital on December 6. Protests have continued in the Gaza Strip on a weekly basis since.

Between January 30 and February 14, the Office for the Coordination of Humanitarian Affairs (OCHA) reported that at least 92 Palestinian children were injured by Israeli forces in the context of such clashes through the OPT, with the Gaza’ Strip border area seeing a high proportion of these injuries.

Israeli forces have also killed four Palestinian children since the start of 2018.