Israeli forces arrested 16-year-old Ismail T. on January 7, 2019, during a night raid on his home in Beit Fajjar, south of Bethlehem in the occupied West Bank. (Photo: DCIP)

Ramallah, August 28, 2020—“I missed my family a lot, I felt lonely without them and without our home’s atmosphere,” recounted Ismail T., 16, from Beit Fajjar village south of the occupied West Bank city of Bethlehem.

In no circumstance should children be detained or prosecuted under the jurisdiction of military courts, however, Palestinian children in the West Bank, like adults, face arrest, prosecution, and imprisonment under an Israeli military detention system that denies them basic rights.

Military law has applied to Palestinians in the West Bank since 1967, when Israel occupied the territory following the Six Day War. Jewish settlers, however, who illegally reside within the bounds of the West Bank, are subject to the Israeli civilian legal framework. Accordingly, Israel operates two separate legal systems in the same territory.

Israeli soldiers detained Ismail around midnight from his family's house on January 7, 2019, and he did not return home until four months later. He was released following a plea agreement approved by an Israeli military court judge at Israel’s Ofer military court.

“I was sleeping when the soldiers raided our house at midnight,” Ismail told Defense for Children International – Palestine. “My mother woke me up and informed me that Israeli soldiers are in our house.” 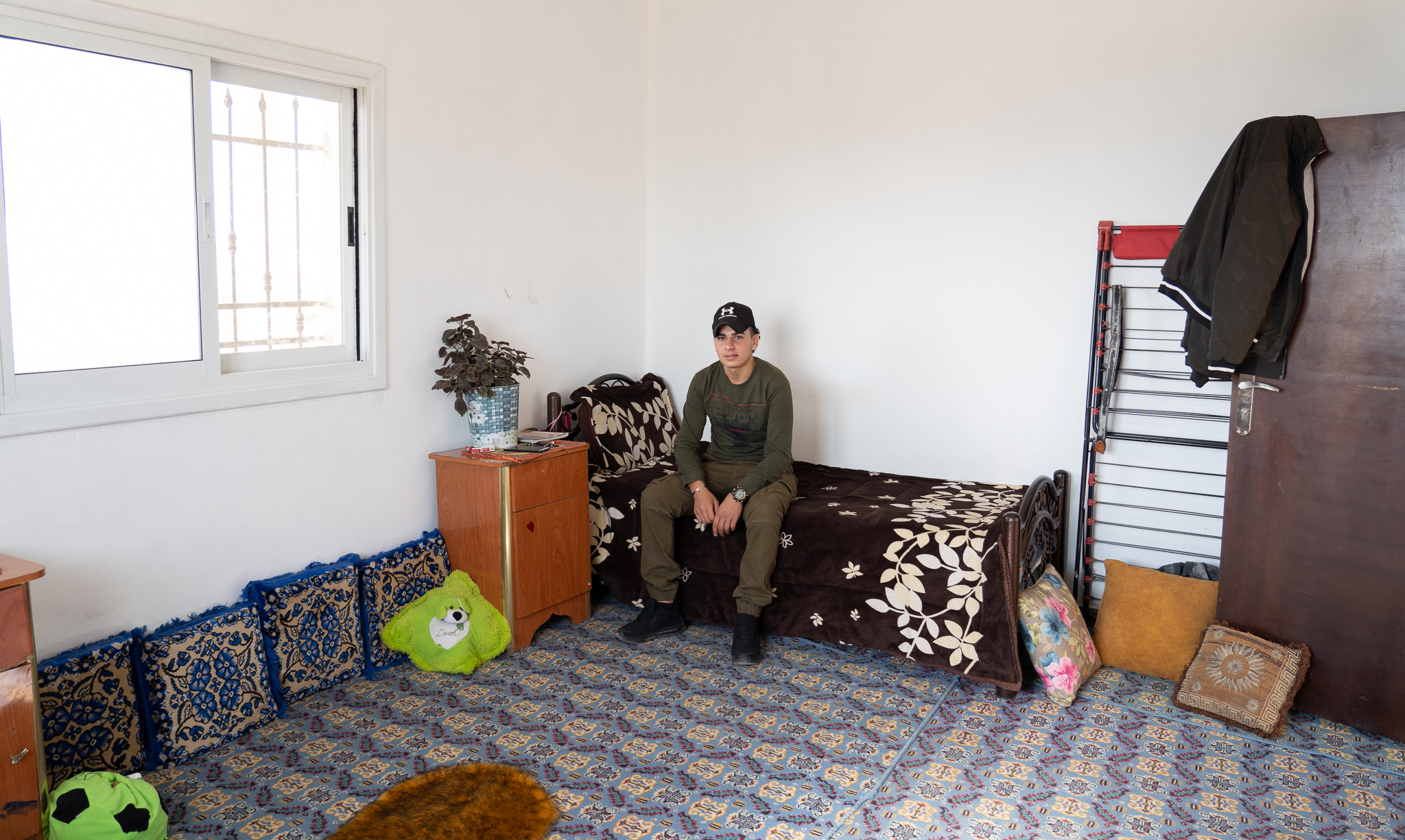 According to Ismail’s sworn testimony, Israeli forces did not inform him or his parents of the reason for his arrest. Israeli forces bound his hands with plastic cords in front of his body, blindfolded him, and pushed him inside a military vehicle.

Ismail’s experience is not exceptional; Israel has the dubious distinction of being the only country in the world that systematically prosecutes an estimated 500 to 700 children each year in military courts lacking fundamental fair trial rights.

In 2019, DCIP collected affidavits from 113 Palestinian children detained by Israeli forces from the West Bank and prosecuted in Israeli military courts. 66 percent of children were arrested from their homes in the middle of the night, and 89 percent were not informed of the reason for their arrest. 73 percent of children endured some form of physical violence following arrest and 57 percent were verbally abused, intimidated, or humiliated, based on evidence collected by DCIP. 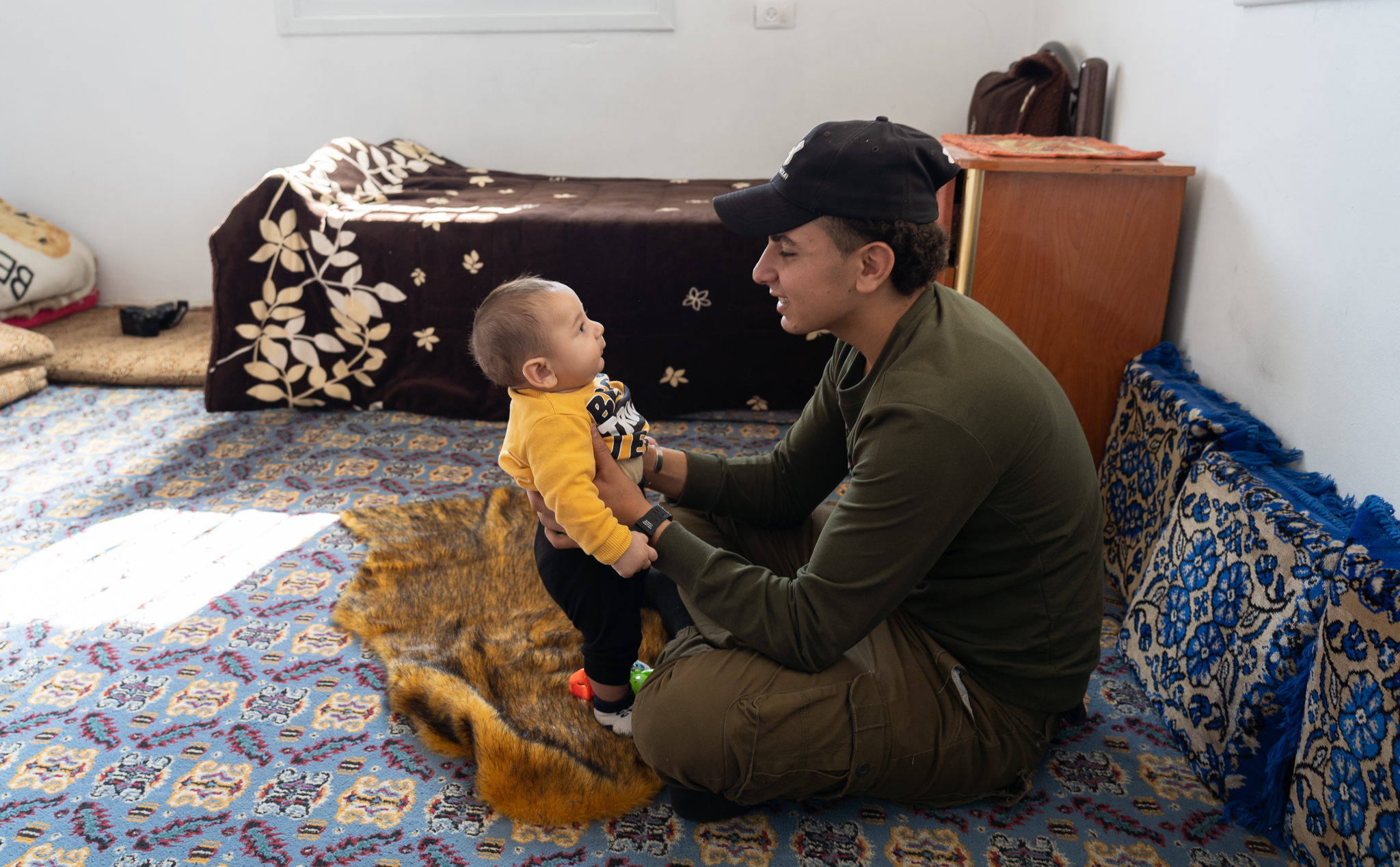 After Ismail was detained, he was transferred to Israel’s Etzion interrogation and detention center located near the West Bank city of Hebron. Israeli soldiers forced him to sit on the floor of the military vehicle bound and blindfolded.

Ismail was taken to a clinic where he was asked general questions about his health by an Israeli soldier. He was bound and blindfolded the entire time and then forced to wait approximately an hour and a half outside the building, according to his sworn testimony.

Then, Israeli forces made him walk for 30 minutes until they reached the detention cells at Etzion interrogation and detention center. He was strip-searched and spent the night in a cell with another Palestinian child detainee. 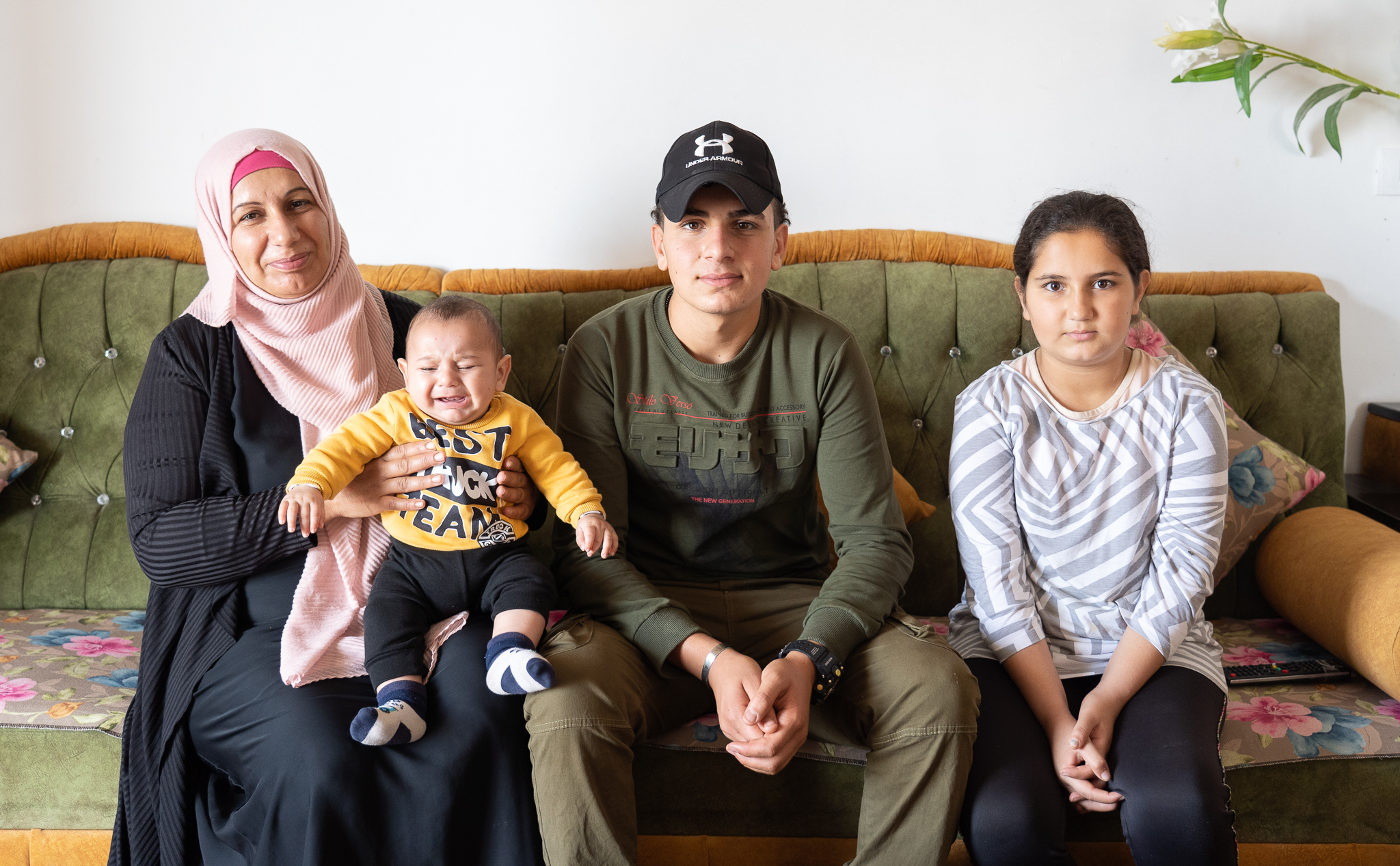 The next day around 1 p.m., Ismail was taken to an interrogation room. Unlike most Palestinian children detained and interrogated by Israeli authorities, he received a brief legal consultation with a lawyer by phone prior to his interrogation. The interrogation lasted about two and a half hours.

Israeli military law provides no right to legal counsel during interrogation. Children often give confessions after verbal abuse, threats, physical and psychological violence that in some cases amounts to torture.

“The interrogator kept screaming at me,” said Ismail. “I do not remember that he informed me of my rights before the interrogation began.”

In addition to ill-treatment during his arrest, transfer, and interrogation, Ismail also suffered from loneliness, lack of child-friendly recreational facilities, and inadequate schooling during his four-month period in military detention. 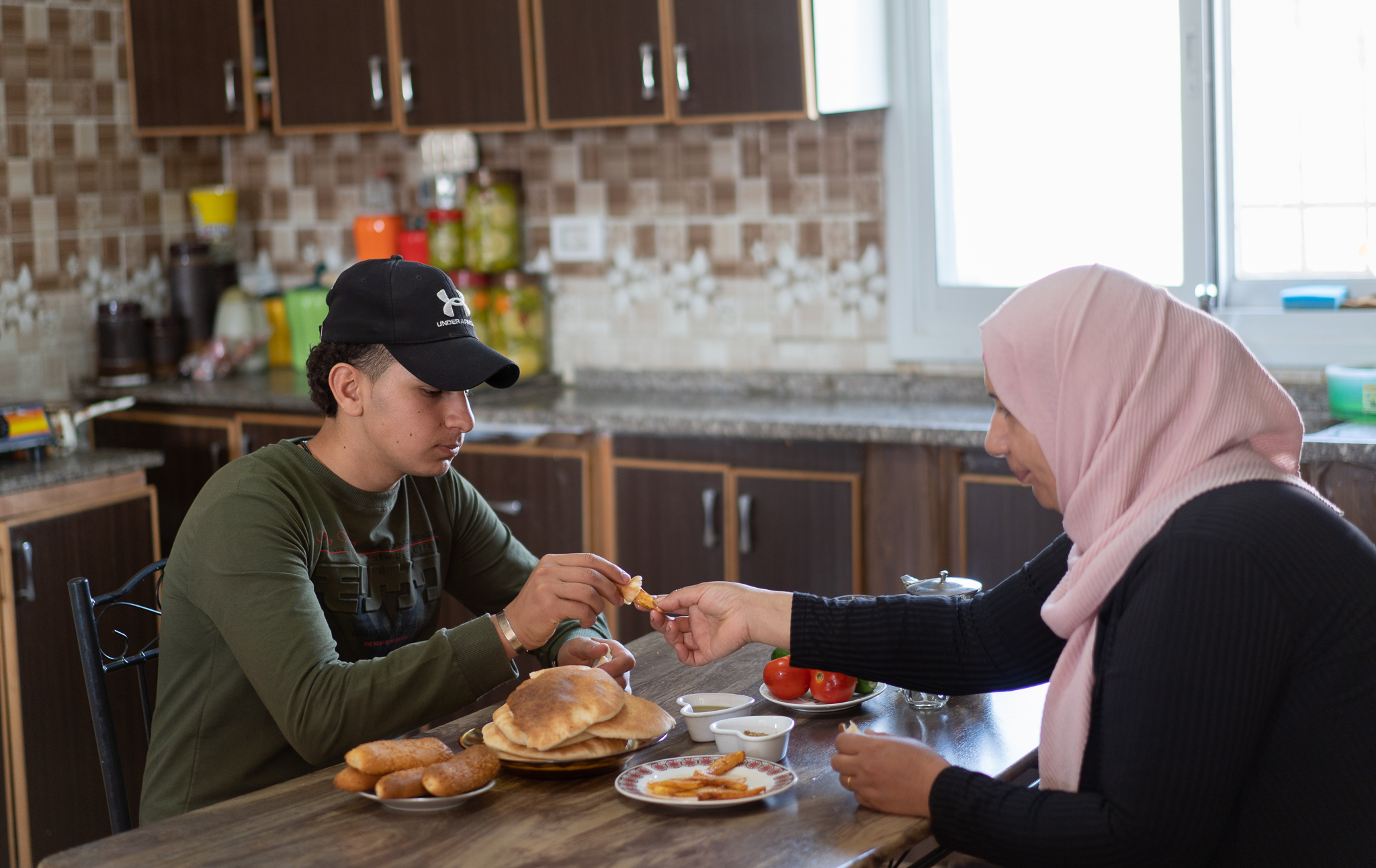 Ismail had five court hearings in total, all at Israel’s Ofer military court located near the West Bank city of Beitunia, situated between Jerusalem and Ramallah. His parents made the trek from Beit Fajjar to attend each hearing.

“Going to the court was hard,” Ismail told DCIP. “We woke up early in the morning, got dressed, and then we were immediately transferred, in a military transport vehicle without having anything to eat. Although I was detained at Ofer’s juvenile section, which is not far from the military court, we traveled long distances, making us feel exhausted,” he added.

Regardless of guilt or innocence, children in conflict with the law are entitled to special protections and all due process rights under international human rights law. International juvenile justice norms are built on two fundamental principles: the best interests of the child must be a primary concern in making decisions that affect them and children must only be deprived of their liberty as a last resort, for the shortest appropriate period of time.

Many children prosecuted by Israeli forces maintain their innocence but plead guilty as it is the fastest way to get out of the military court system. Israeli military court judges seldom exclude confessions obtained by coercion or torture.

Most receive plea deals of less than 12 months. Trials, on the other hand, can last a year, possibly longer. Bail is rarely granted and most children remain behind bars as they await trial or approval of a plea agreement, based on evidence collected by DCIP.

“We were able to negotiate a lower sentence because Ismail’s confession was coerced, and there was a lack of evidence supporting the case against him,” said Bayadsi.

Ismail spent his time in prison in both Ofer prison and Megiddo prison. Ofer is the only juvenile detention facility located inside the occupied West Bank. All other juvenile detention facilities are located inside Israel. Detaining Palestinians inside Israel amounts to an unlawful transfer in violation of article 76 of the Fourth Geneva Convention.

After applying for visiting permits through the International Committee of the Red Cross (ICRC), Ismail’s parents visited him four times during his imprisonment.

“I used to get ready for family visits by shaving and cleaning myself,” Ismail told DCIP. “I wanted my parents to see me in good condition.”

“The visits were hard; we were not able to sit near each other. We talked through a glass wall and had to raise our voices to hear each other,” he added.

Not only was the experience difficult for Ismail, but also for his parents and four siblings. “It is an extremely hard experience,” said Ismail’s mother, Shafa T., to DCIP. “We remember him in all our daily activities, I remembered him specifically when I cooked Maklooba [a traditional Palestinian dish], it was his favorite,” she added. 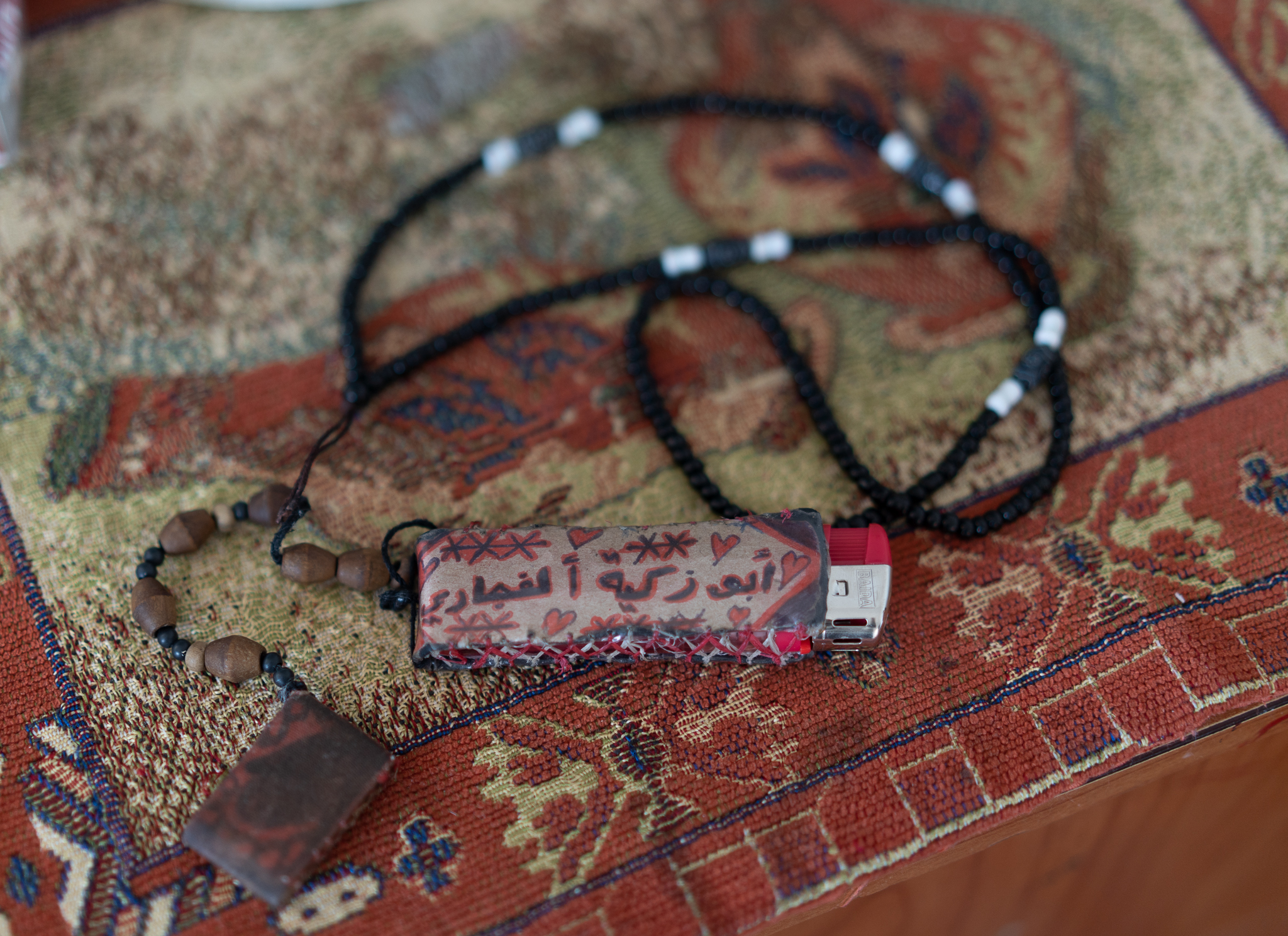 Ismail shared his cell with ten other Palestinian child detainees, most of them were from his village. They had no books or educational materials and only a TV that broadcasted limited channels. In his free time, Ismail made simple crafts using the material available around him such as plastic covers for food, and toothpaste tubes.

Additionally, United Nations guidelines mandate that a child deprived of their liberty “shall be integrated with the educational system of the country so that after their release they may continue their education without difficulty.”

Despite sustained engagement by UNICEF and repeated calls to end night arrests and ill-treatment and torture of Palestinian children in Israeli military detention, Israeli authorities have persistently failed to implement practical changes to stop violence against child detainees.

“Teachers came for a short time and taught us some Hebrew letters and numbers,” Ismail said. “The teachers did not pay proper attention to us. Sometimes they came for ten minutes and then left without teaching us anything,” he added.

After his release, Ismail returned to school. He received psycho-social support from his school counselor in addition to attending sessions as part of a local YMCA rehabilitation program.

“Ismail was able to overcome the military detention experience because of the support he received,” Ismail’s mother said.

An estimated 13,000 Palestinians between the ages of 12 and 17 in the West Bank have been subject to arrest, detention, interrogation, and imprisonment under the jurisdiction of Israeli military courts since 2000.