Ramallah, June 27, 2014—Perched on a hill in Israeli-controlled Hebron, across from the Beit Hadassah settlement, Qurtaba School is where 157 Palestinian boys and girls, ages 7 to 16, study. Its windows are covered with metal netting to protect students from attacks by settlers, who in the past have thrown rocks, glass bottles and Molotov cocktails through the windows into the classrooms.

At any given time, visitors will find graffiti written by settlers. “Gas the Arabs!” has been scrawled on a wall near the school – and death threats against the students and curse words in both Hebrew and Arabic are also common.

Because Israel’s military restricts Palestinian movement in H2, some students have to cross through a military checkpoint and metal detectors on their way to school. A November 2013 OCHA report noted: “There are over 120 physical obstacles, deployed by the Israeli military, which segregate the restricted areas from the rest of the city, including 18 permanently staffed checkpoints.”

“Coming to and from school is our biggest problem. Our students often get held for long periods of time at the checkpoint,” said Noura Nasser, the principal at Qurtaba School. “Settlers also throw eggs and trash at the kids as they walk here.”

Students who come through the main checkpoint must walk up Shuhada Street. Though quicker than making a detour of several kilometers around the Old City and entering the school from the other side, settlers frequently try to hit the children or run them over in vehicles.

“I've seen it with my own eyes,” said Nasser. “The settlers drive upwards of 80 kilometers per hour (55 miles per hour) with the intention of hitting kids.”

She says the school has changed its hours to start and finish earlier, which has lessened the problem.

Shatha Ramadan, 11, is one of the best students in the 6th grade, but she often struggles to maintain focus due to emotional trauma caused by frequent settler attacks.

“They come to our home every Saturday after they finish their holiday,” Shatha told DCI-Palestine, referring to Shabbat, the Jewish day of rest. “Several times they have kicked through the door to our house and attacked us in our home.”

Shatha lives next to one of the main checkpoints on Shuhada Street with her parents and six brothers and sisters, all of whom are under 18. Each morning on the way to school, Shatha has to walk past the settlers who attack her and her family.

During the worst incident, Shatha recalls opening her front door after hearing someone rustling around next to the window. When she stepped outside, a group of settlers struck her on the head several times.

“When I tried to turn and go back into the house, they hit me on the leg with a wooden pole,” Shatha said. “There were adults and kids. Afterwards, my dad had to take me to the hospital.”

Shatha had to have x-rays and was left with severe bruising.

Each day Muawiah Abu Heikal, 11, walks back and forth between the school and his home in the Tel Rumeida neighborhood of Hebron. One Sunday in April 2013, he and his brother were arrested by Israeli soldiers after a confrontation with a group of local settlers.

“We were walking home the same way as them,” Muawiah told DCI-Palestine. “One of the settlers started to bother my friend Ahmad. We tried to help him get away, but the settler called over a soldier and said we hit him with stones.”

Muawiah and his brother were handcuffed and taken to a police station in Kiryat Arba, a nearby Israeli settlement.

“My brother was left handcuffed in the military jeep while they took me inside for interrogation,” he said, adding that he was frightened to go in by himself.

After being questioned by soldiers for several hours, Muawiah was taken to a hospital.

“I had bruises on my arms because they hit me … and my stomach hurt badly. Before they released us, they took our pictures and threatened to fine our parents if they catch us again,” he said.

Israeli military forces detain or arrest Palestinian children in Hebron on a regular basis. Israeli soldiers rounded up 27 backpack-wearing children on their way to school in March 2013 in an incident documented by DCI-Palestine and news sources.

DCI-Palestine estimates that the Israeli military has detained over 8,000 children since 2000. Since 2008, there have been at least 170 Palestinian children in Israeli detention at any given time.

Israeli military documents leaked to Haaretz in 2011 noted that “99.74 percent… of cases (against Palestinians) heard by the military courts in the occupied territories end in a conviction.”

Across the West Bank, including East Jerusalem, Palestinian children are frequently detained, arrested and imprisoned. Yet no such equivalent exists on the Israeli side, meaning settlers and soldiers operate largely without legal consequences.

Jalud, a village about 30 kilometers (19 miles) south of Nablus, is in close proximity to four illegal Israeli outposts whose residents regularly attack Palestinian villagers and vandalize their property.

Generally smaller than a settlement, an outpost is a West Bank settlement built without official Israeli government authorization, but which often receives support and assistance from government ministries, according to B’Tselem. The human rights group estimates that approximately 100 outposts exist throughout the West Bank.

Among the four outposts near Jalud is Esh Kodesh, an outpost community established in 2000, partially on land privately-owned by Palestinians. It has been protected by the Israeli military since 2011, despite being illegal under both international and Israeli law. 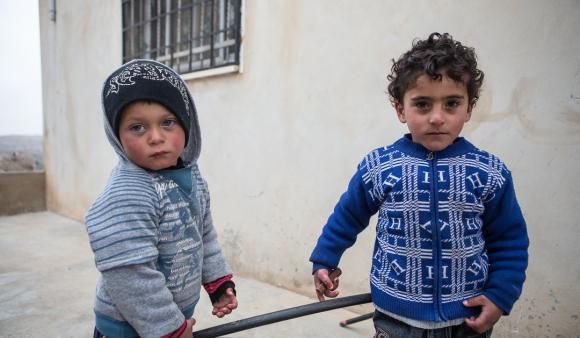 Some residents of Esh Kodesh are known for their extreme nationalist politics and religious beliefs, much like their neighbors in the Ahiya outpost less than two kilometers (about 1 mile) away.

On Oct. 9, 2013, a group of settlers from nearby outposts attacked Jalud’s elementary school. Around noon, they broke into the school and threw rocks at the classrooms. Haaretz later reported that the attack was carried out as part of the “price-tag” campaign in reprisal for the Israeli military’s dismantling of another outpost.

Omar Abdullah, 12, told DCI-Palestine that he and other students recognized the settlers from previous attacks in their neighborhoods.

“We were all very scared,” Omar said. “The next day none of us came to school, even though we were supposed to take a big test.”

He remembers thinking the attackers were Israeli soldiers at first: “I saw them enter the front gate of the school and start smashing the windows of our teachers’ cars. They were using stones.”

Later, he said, they poured a flammable liquid around the periphery of the school and lit a blazing ring of fire that encircled half of the school’s perimeter.

“Even our teachers were scared after that,” Omar recounted nervously. “It was hard for us to come to school and think about our studies.”

For some students, this is not their first experience of settler violence.

Five-year-old Farah Abbad had been assaulted a few months earlier during an hour-long settler attack on his family’s home near the Ahiya outpost.

Farah’s grandmother, Wardeh, and his father, Naseem, were with him when he was attacked.

“The settlers came in disguise. They were dressed in Arabic clothing,” Wardeh told DCI-Palestine. “They were right in front of me by the time I realized they were settlers. One of them hit Farah in the head with a rock.”

Farah, then 4, was “screaming and crying really hard because he was in pain and terrified,” remembers Naseem. He received several stitches to the right side of his forehead.

He is now too scared to walk to school alone because the pathway is close to the Ahiya outpost.

“Sometimes (the settlers) harass the kids on the way home from school. Farah and the other kids often come home crying and frightened,” Wardeh said.

Naseem also explained that during the same hour-long attack his 16-year-old brother, Saleh, sustained a foot injury from a stone hurled by a settler. “My whole family was terrified,” he added.

Recent OCHA statistics estimate that more than 2,100 settler attacks occurred since 2006, 399 of which took place in 2013 alone.

DCI-Palestine recorded 129 instances of settler violence against Palestinian children between 2008 and 2012.

While Israeli settlers, including children, often attack Palestinians with stones and other objects, they are rarely held accountable as the Israeli army lacks the authority to arrest Israeli settlers in the West Bank. As a result, only Palestinians, often children, are detained or arrested in connection with stone-throwing exchanges, according to affidavits collected by DCI-Palestine

Across the West Bank, attacks regularly begin with settlers and are finished off by the Israeli military.