Ramallah, October 4, 2014—The Israeli military offensive on the Gaza Strip during July and August 2014 led to the internal displacement of nearly half a million civilians, many of whom were children. Hundreds of thousands fled to UNRWA shelters, where conditions were crowded and, as the conflict dragged on for 51 days, increasingly unsafe. Some UNRWA shelters were directly targeted by the Israeli military, while others experienced severe shortages of food and water. Nearly all those displaced left their homes abruptly, carrying very little. Many returned after the conflict to find their homes in rubble. 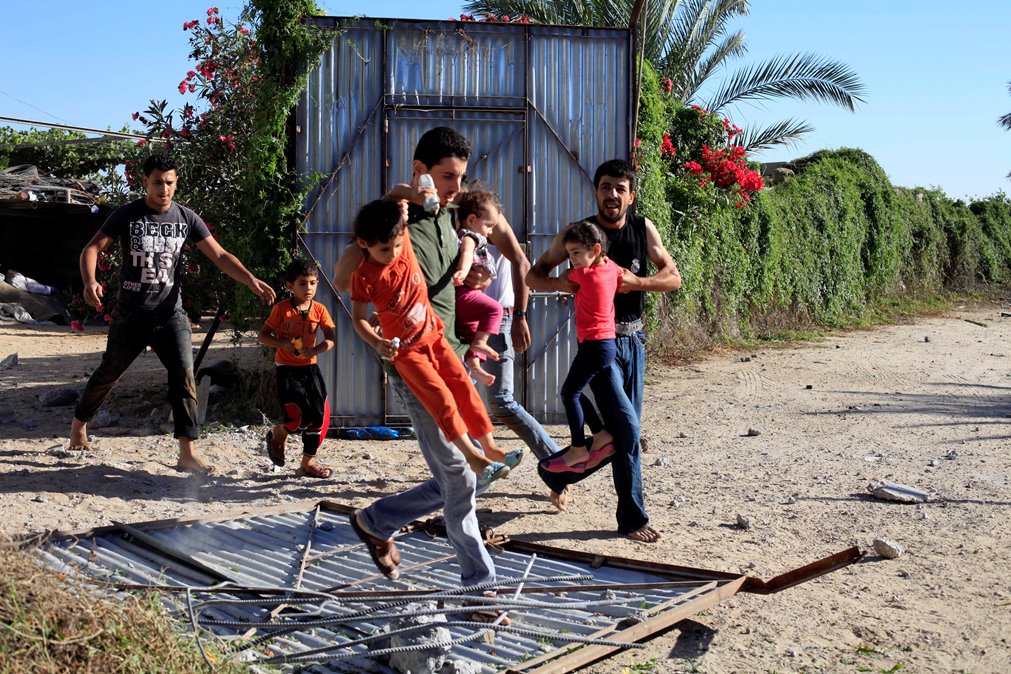 A family from Jabalia refugee camp, to the north of Gaza City, grabs the children and evacuates their house on July 11, 2014, after an Israeli airstrike targets a mosque adjacent to their house.

Airstrikes during the 51-day Operation Protective Edge frequently targeted buildings where civilians were living in densely populated residential areas. ‘Knock-on-the-roof’ warnings – smaller missiles fired before a larger bomb was dropped – gave families just a few minutes to take their children and flee their homes. In many cases, no warning was given, resulting in large numbers of civilian fatalities. Families often left with nothing and returned to find their home in ruins. 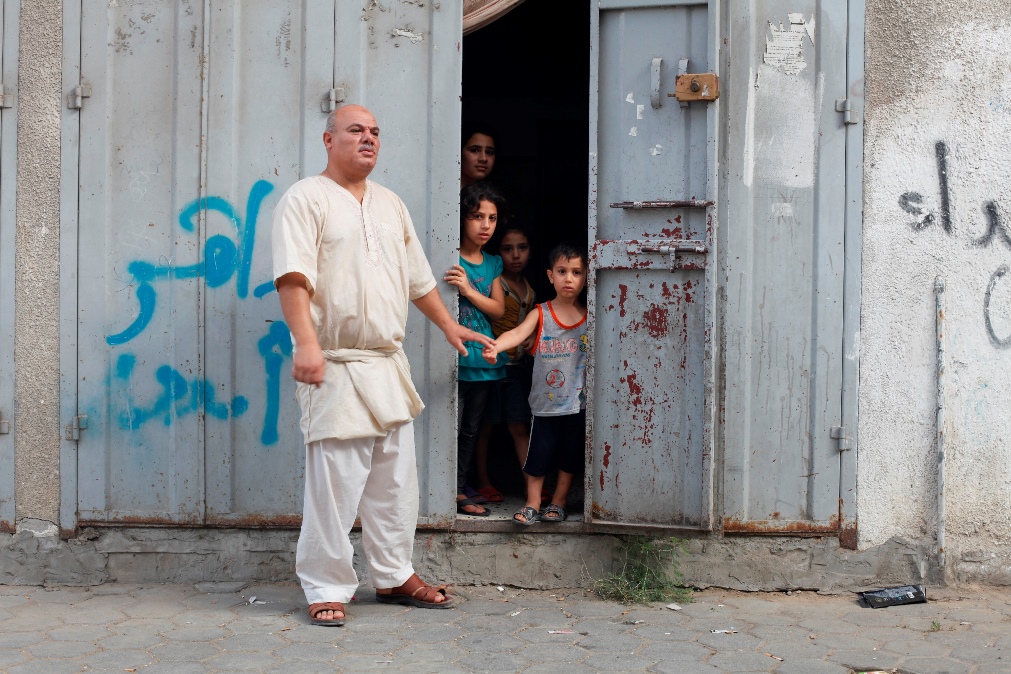 A family from the heavily bombed suburb of Shujaiyya, to the east of Gaza City, stands at their door on July 20, 2014. Many families fled the intense bombardment that took place in the area during the ground invasion of the Gaza Strip. This family, however, said that they had nowhere to go.

UNRWA shelters housing displaced civilians were already experiencing severe overcrowding by July 20. High numbers of fatalities were recorded in Shujaiyya, which experienced some of the heaviest shelling of the conflict. It is not known whether this family survived. 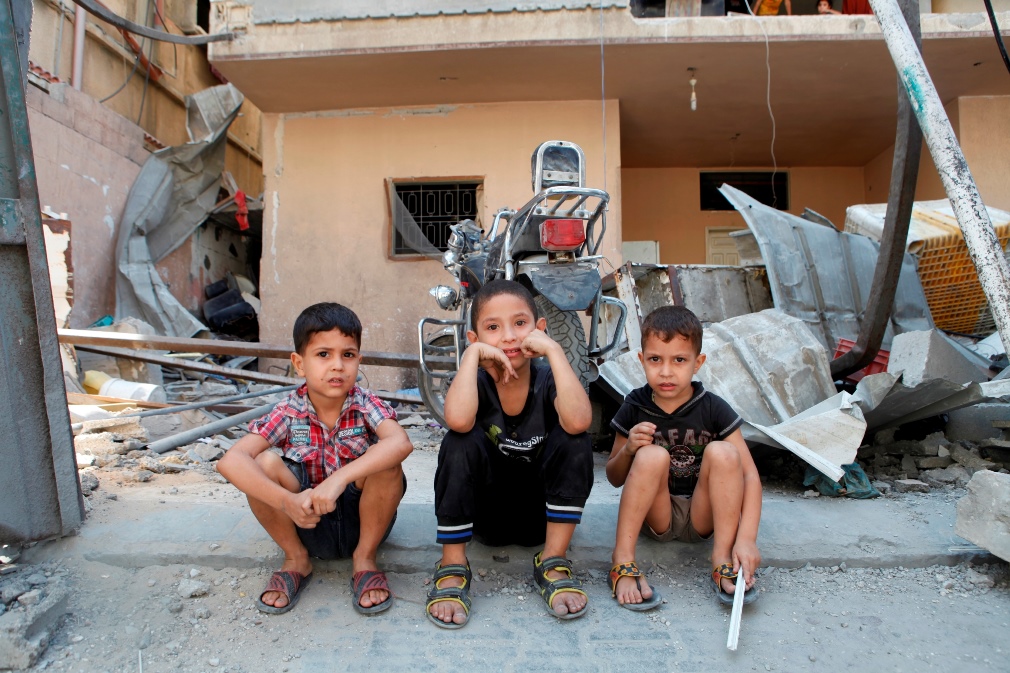 Three children sit among the remnants of their neighborhood in Jabalia, to the north of Gaza City, on August 11 during a temporary ceasefire negotiated by Egypt.

Jabalia saw heavy artillery and aerial attacks that reduced many residential buildings to rubble and displaced thousands, many of whom were children. Sporadic ceasefires induced many families to try to return to their homes, but the sudden breakdown of truces meant many people found themselves trapped in areas once again experiencing heavy bombardment. Despite the dangers, overcrowding and poor sanitation in shelters drove many back to devastated neighborhoods. 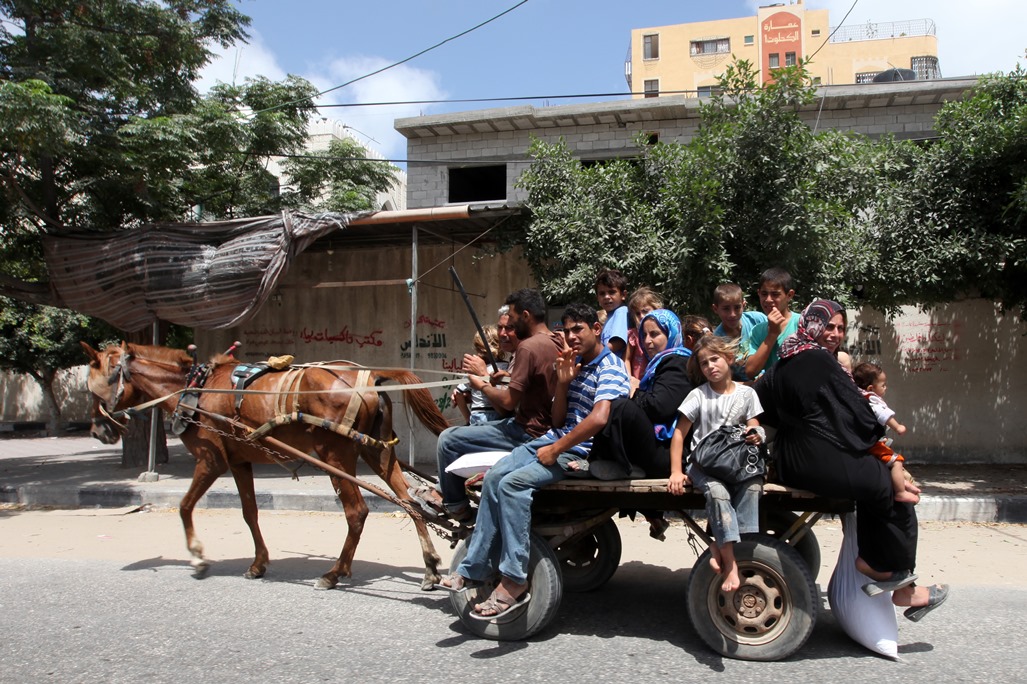 A family evacuates their home in Beit Lahia in the northern Gaza Strip on July 13, 2014. The family fled after the Israeli military announced that the area would come under intense bombardment in retaliation for rockets fired from the area.

This family was among the first wave of civilians to seek shelter after aerial attacks began on the Gaza Strip on July 8. By August 26, around a third of Gaza’s population of 1.8 million people had been displaced from their homes. 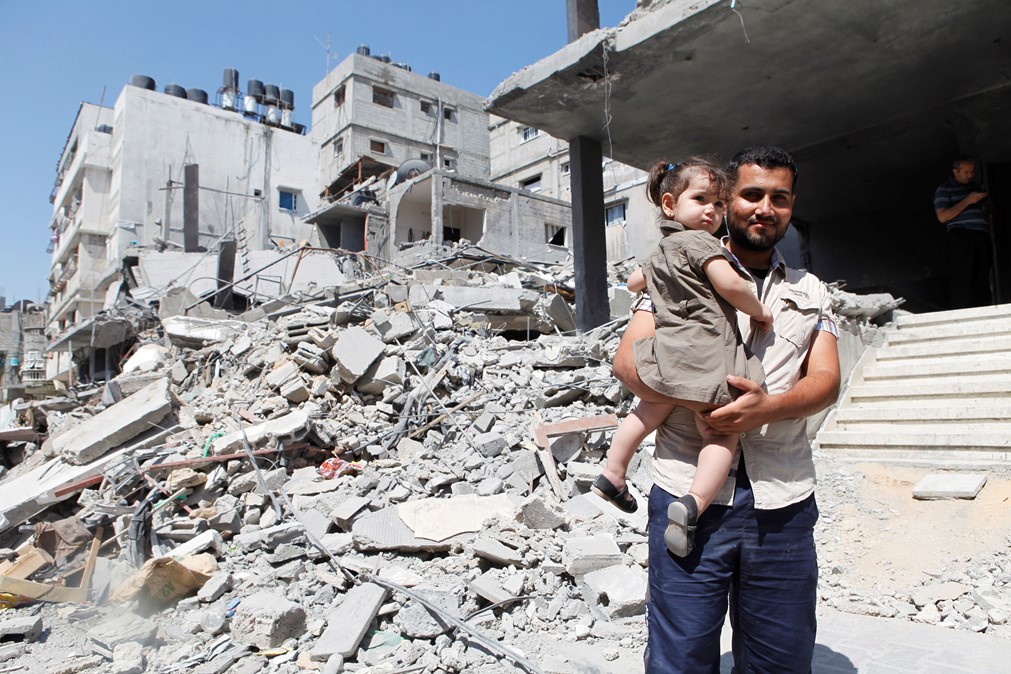 A father stands holding his daughter in front of the rubble of their home in Jablia, in the north of the Gaza Strip, on August 11. The family, who had originally evacuated their home due to heavy fighting in the area, returned to their house following media reports that Israeli forces were withdrawing from the area. Like thousands of others, they found their home completely destroyed. 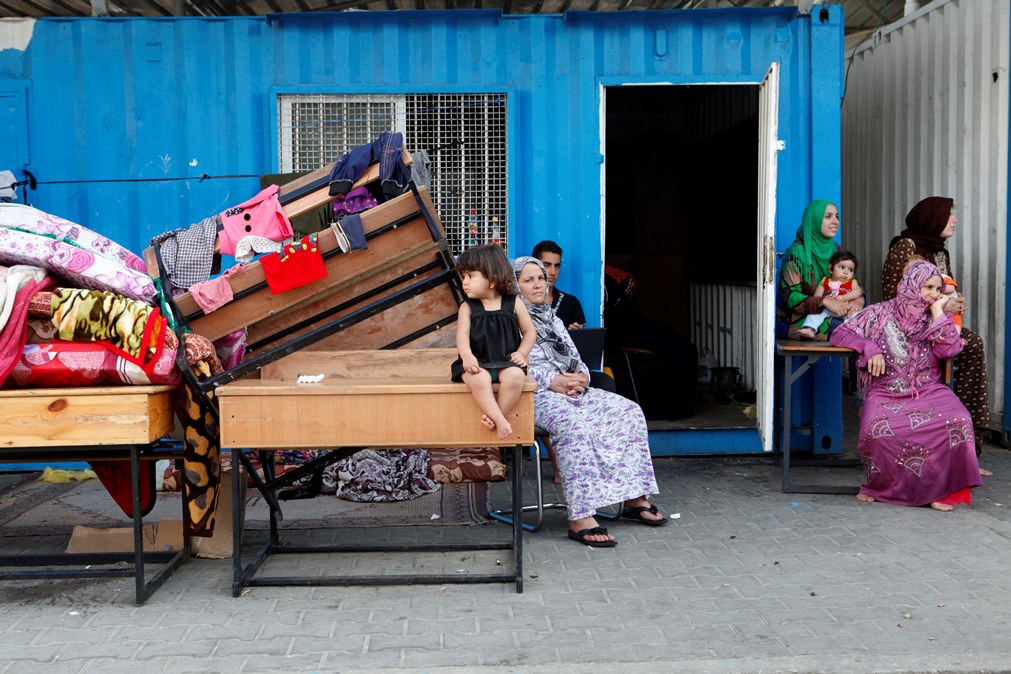 A toddler sits with her mother among belongings gathered hastily from their family home before it was evacuated on July 22.

She is one of thousands of Palestinians who sought refuge at UNRWA schools after Israeli forces ordered them to evacuate their homes in the northern Gaza Strip ahead of aerial strikes. 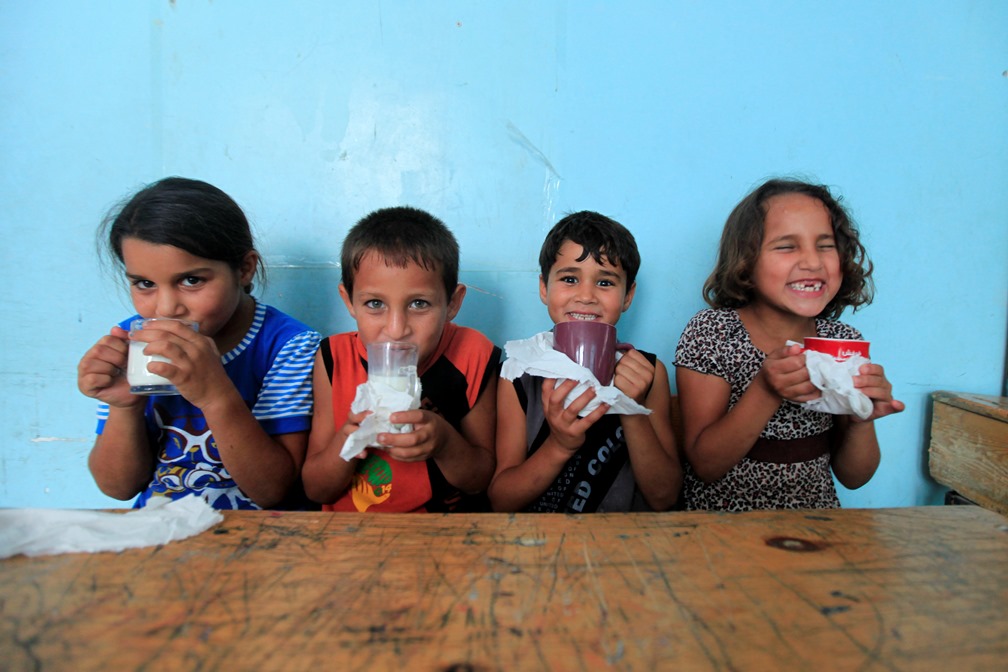 Displaced children drink milk distributed at the New Preparatory Boys’ School on Nasser Street in Gaza city, on July 15. The school is one of many being used by the UNRWA as a temporary shelter for civilians who have fled their homes as a result of intense bombing by the Israeli military.

Nearly 200 families sought shelter at the school, while thousands more were scattered across the Gaza Strip in similar conditions. By the third week of the conflict, intense overcrowding was reported in the schools, with UN spokesman Chris Gunness saying that the shelters were “overflowing” and “stretched to breaking point.” 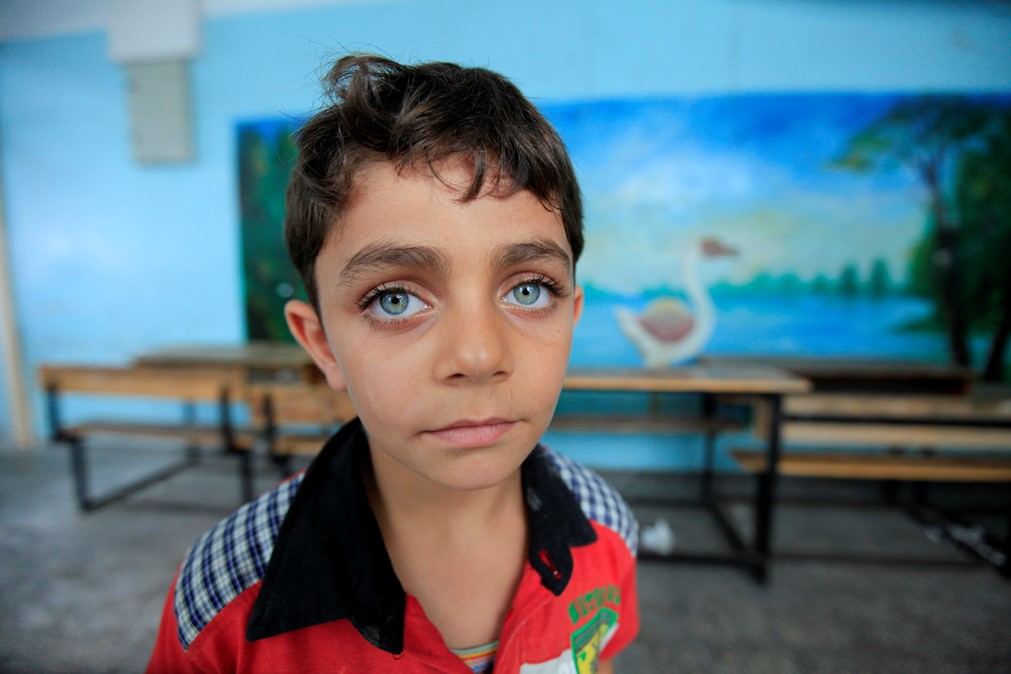 Mohammad Abdel-Fatah al-Atar, 7, is from Atatra neighborhood in Beit Lahia to the north of the Gaza Strip. His family sought refuge in the New Preparatory Boys’ School in Gaza City, which is being used by the UNRWA as a shelter for displaced Palestinians.

Children under the age of 14 make up over 40 percent of Gaza’s 1.8 million-strong population, and have suffered heavily throughout the 51-day conflict. Mohammad is among the thousands of children who were displaced and who require psychosocial support to cope with loss of family members, homelessness or injury.

Eloise Bollack is a freelance contributor to Defense for Children International Palestine.

Fatalities and Injuries | Settler and Soldier Violence | Right to a Childhood