The coalition, which includes Jewish Voice for Peace Action, the Friends Committee on National Legislation, Churches for Middle East Peace, and others, sent a letter to President Biden urging him to block the delivery of $735 million worth of weapons to Israel. The letter was signed by more than 100 civil society organizations that advocate for human rights and social justice, including Demand Progress, Win Without War, Justice Democrats, MoveOn, Working Families Party, Indivisible, and Sunrise Movement.

DCIP has launched a petition and urges the public to join our call demanding that President Biden halt this weapon sale to Israel. 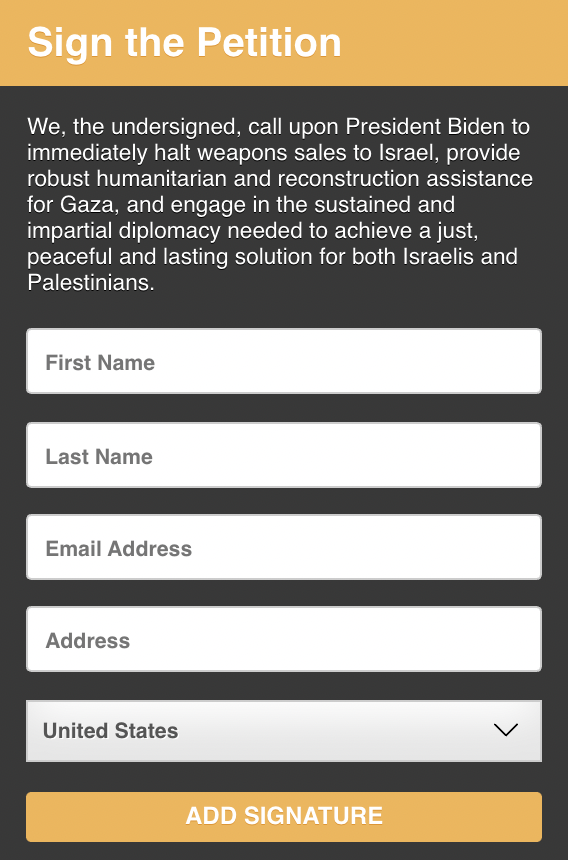 In May 2021, Israeli forces launched an 11-day military offensive against Palestinians in the Gaza Strip. The Israeli military used U.S.-manufactured and sourced weapons in a massive assault that resulted in the deaths of at least 256 Palestinians, including 67 children, according to evidence collected by DCIP. More than 91,000 Palestinians were forcibly displaced at the height of the bombardment, all while the COVID-19 pandemic continued to dangerously spread in the Gaza Strip.

In the midst of the May military assault, the Biden administration approved a $735 million weapons sale to Israel, which included the same kinds of weapons used against Palestinians in Gaza.

Rep. Alexandria Ocasio-Cortez (D-NY-14) introduced a joint resolution of disapproval in the House of Representatives on May 19, and the following day Sen. Bernie Sanders (I-VT) introduced a similar resolution in the Senate. However, the State Department approved the sale before Congress could debate and vote on the resolutions. Most weapons sales provide Congress with a 30-day window to debate and vote on the sale, whereas Israel is one of several countries that enjoys a 15-day window, according to the Center for International Policy.

Israel is permitted to use a portion of its FMF funding to purchase weapons from Israeli weapons manufacturers, which is known as “offshore procurement.” Offshore procurement has no end-use monitoring in place, so it is unknown exactly how these funds are used.

Most countries that receive military funding from the U.S. must purchase weapons through the Foreign Military Sales process, where the U.S. government manages the transaction. However, Israel is permitted to engage in direct commercial sales with weapons manufacturers, which results in a process with little to no transparency.

On April 16, 2021, Rep. Betty McCollum introduced H.R. 2590, the Palestinian Children and Families Act, which would prohibit U.S. military funding from being used to detain and torture Palestinian children, demolish Palestinian homes and property, and further annex the occupied West Bank. The bill also calls for State Department certification and an annual Government Accountability Office report that confirms to Congress that U.S. funds have not been used for these purposes.