“Excessive force and misuse of crowd control weapons has once again proved to be the norm for Israeli forces when quashing protests,” said DCIP's Ayed Abu Eqtaish.

Following the United States’ recognition of Jerusalem as Israel’s capital, Israeli forces misused crowd-control weapons and, at times, live ammunition against children in the context of confrontations with Palestinian protesters. Between December 6 and 20, Defense for Children International - Palestine documented eight child injuries in the OPT. Six of this number suffered head injuries, all except one with potentially irreversible damage, including two children with permanent eye loss. The number of children arriving at Israel’s Ofer military prison in the central West Bank also doubled this month, marking a spike in military detention in which systematic ill-treatment of Palestinian minors is routine.

“Excessive force and misuse of crowd control weapons has once again proved to be the norm for Israeli forces when quashing protests,” said Ayed Abu Eqtaish, Accountability Program director at DCIP. “Israeli forces seemingly disregard their own open-fire regulations and international law, and enjoy near complete impunity for their unlawful conduct. This lack of justice and accountability results in a high toll paid by Palestinian minors subjected to serious injury or even death.”

U.S. President Donald Trump’s decision to publicly recognize Jerusalem as the capital of the Israeli state led to large-scale demonstrations, marches and clashes throughout the West Bank, including East Jerusalem, and the Gaza Strip. Israel annexed the eastern half of Jerusalem in 1967, a move condemned by the United Nations Security Council and not recognized by the international community, and is considered occupied territory under international law. The U.S. decision leaves future borders up for negotiation but reversed a long-held White House position of maintaining its embassy in Tel Aviv, saying the embassy would be moved in three years.

Palestinians called for several “days of rage” to demonstrate local opposition to the move. Protesters, including children, in some cases threw stones and firebombs, often near checkpoints and other Israeli military installations. Israel appears to have primarily relied on crowd-control weapons and rubber-coated metal bullets to quell protests with some incidents of live ammunition. DCIP documentation of injuries and witness reports however showed an alarming misuse of crowd-control weapons.

The United Nations General Assembly overwhelmingly voted on December 21 to reject the decision, days after the UN Security Council proposed a resolution to withdraw the U.S. recognition. With the exception of the U.S., which used its veto power to scrap the resolution, all of the 14 other members supported the measure.

In the West Bank, two Palestinian teenagers, both aged 15, were struck in the head by rubber-coated metal bullets at the hands of Israeli forces.

“He [Mohammad] was laying on the ground. His face and clothes were covered in blood,” the eyewitness, who wished to remain anonymous, said.

An eyewitness told DCIP that Israeli forces shot Mohammad Tamimi, 15, with a rubber-coated metal bullet shortly after clashes had ended in the Ramallah-area village of Nabi Saleh in the central West Bank on December 15. According to the eyewitness, Israeli forces appeared to have exited the area around 4 p.m. when an Israeli soldier shot Mohammad in the face with a rubber-coated metal bullet at close range. 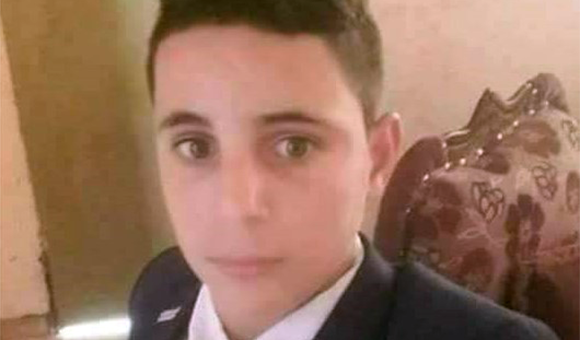 “He [Mohammad] was laying on the ground. His face and clothes were covered in blood,” the eyewitness, who wished to remain anonymous, said.

Mohammad’s treating physician told DCIP that the 15-year-old underwent two operations to remove the rubber-coated metal bullet, which lodged in the back of his skull and caused severe bleeding in his brain. The child’s 16-year-old cousin, Ahed Tamimi, was detained days later in a night raid.

“It hit me in the face like a stone.” Mohammad al-Farani told DCIP. “It was so painful, I don’t know how to describe it.“

In the Gaza Strip, two 14-year-old boys were hit in the face with tear gas canisters when Israeli forces stationed in a military watchtower opened fire on protesters near the Erez crossing.

“It hit me in the face like a stone.” Mohammad al-Farani told DCIP. “It was so painful, I don’t know how to describe it. There was a lot of blood running down my face.” The child was sitting on a concrete block at a December 11 protest near the Gaza border when a canister hit him in the face. He was treated for a fractured cheekbone, head gash, internal bleeding in the brain, and later underwent eye surgery to remove his right eye.

Nidal al-Majzoub was standing nearby and hit shortly after, requiring 10 stitches on his forehead. Both children were around 50 to 60 meters (55 to 65 yards) from the watchtower at the time of injury. 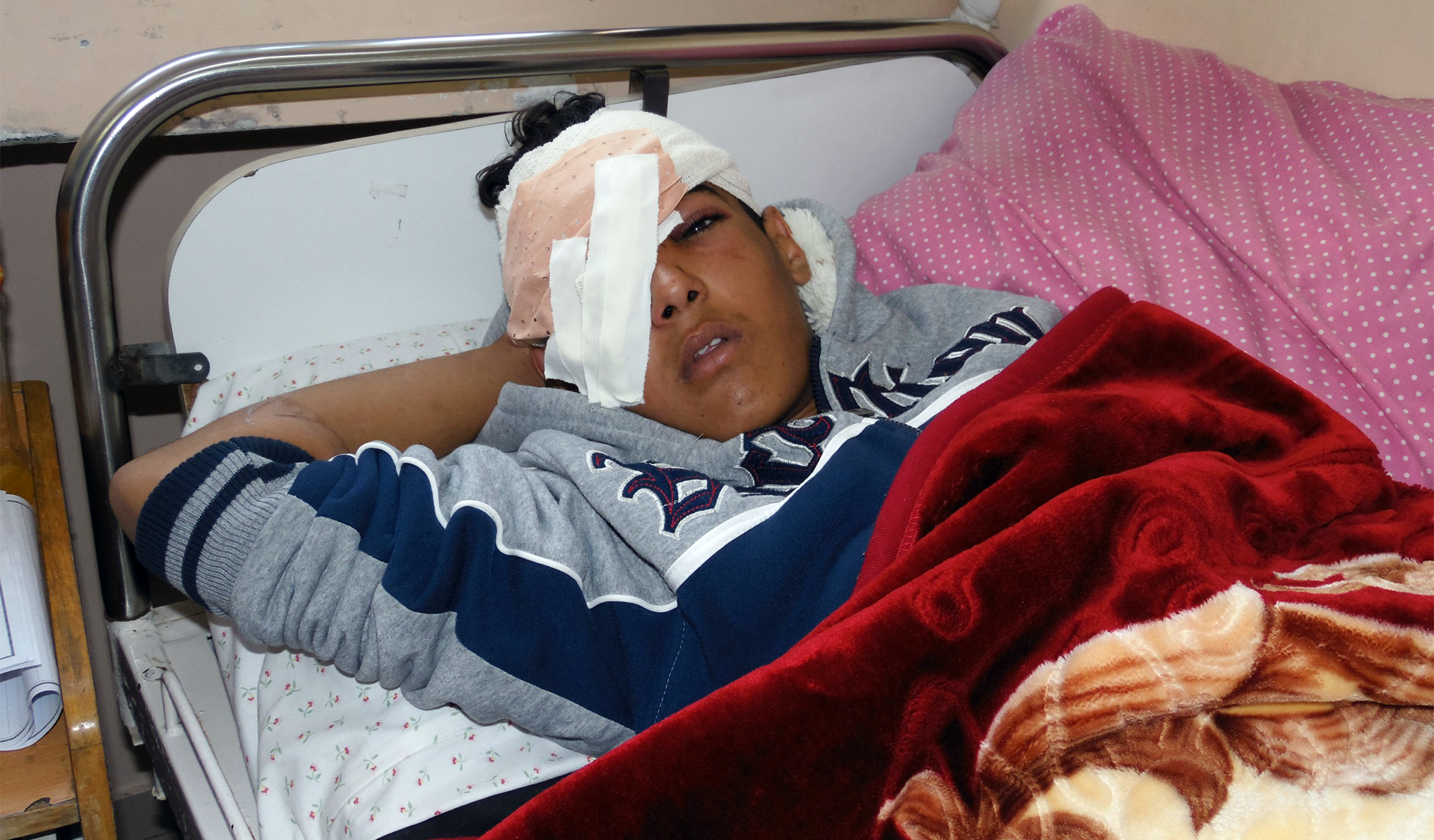 Crowd-control weapons such as sponge-tipped plastic rounds, tear gas canisters and rubber-coated metal bullets are only “less lethal” when used within a narrow set of prescribed conditions. If used at close range, against the upper body, or on children, they can cause critical injury and death.

Use of live ammunition

On December 12, Hamed M., 15, was shot in the face and severely injured with live ammunition near Salfit in the northern West Bank. The Israeli army initially said Hamed attempted to carry out a stabbing attack, but later stated he was shot while attempting to damage a fence next to Ariel settlement. Several local news outlets reported the child was detained and hospitalized in critical condition. DCIP is investigating the circumstances surrounding the injury.

In addition to Hamed M., DCIP documented two live fire injuries including a 16-year-old who was shot above his right eye, causing skull fractures and vision loss. The teen told DCIP he participated in a march on December 8 near Tulkarem in the northern West Bank.

At least 345 Palestinian children in the OPT were injured by Israeli forces between December 5 and 18, according to the United Nations Office for the Coordination of Humanitarian Affairs (OCHA). Over a third of those injured during clashes in the Gaza Strip were shot with live ammunition, OCHA reported.

In December 2015, Israeli police live-fire regulations were updated, permitting officers to use live-fire against an individual who appears to be throwing or about to throw a firebomb, fireworks or is using a slingshot. Live ammunition is often employed by Israeli forces in the context of protests exposing children to the risk of lethal force.

The spike in serious injuries came as OCHA reported eight Palestinians killed by Israeli forces between December 5 and 18 after the U.S. announced it would move its embassy to Jerusalem.

Israeli forces also carried out 160 arrest raids in the West Bank, including East Jerusalem, detaining at least 63 children, according to OCHA.

A DCIP lawyer on December 21 provided legal advice to a 17-year-old girl after she was forcefully detained with her 16-year-old cousin from an ambulance in Halhul on December 13. Israeli authorities released both girls without charge.

“When I arrived at the checkpoint, I remember my face bleeding, mostly my lips because of the beating,” Fawzi said a sworn testimony.

Louay al-Mansi, a Palestinian prisoner in charge of juveniles at Israel’s Ofer military prison, told DCIP that some 77 children arrived between December 1 and 19, more than doubling the number of child detainees to be newly incarcerated in the military facility from the month before.

Among those held in Ofer was 16-year-old Fawzi J., detained in the southern West Bank city of Hebron on December 7. At least four other children were detained with Fawzi the same day, according to testimony collected by DCIP.

Fawzi told DCIP lawyer Farah Bayadsi that by the time he arrived to interrogation, one of his shoes had been kicked off and he had been repeatedly beaten and verbally abused for nearly two hours.

“When I arrived at the checkpoint, I remember my face bleeding, mostly my lips because of the beating. They took me to a room, knocked me down to the floor and began kicking me all over my body,” Fawzi said a sworn testimony.

The child was interrogated without the presence of a lawyer or family member and was allowed access to legal consultation following, not prior to, his interrogation.

Fawzi J. and Ahed Tamimi are among an estimated 500 to 700 children each year detained by Israeli forces and prosecuted in Israeli military courts that lack fundamental fair trial rights and protections.

In 590 cases documented by DCIP between 2012 and 2016, 72 percent of Palestinian child detainees reported physical violence and 66 percent faced verbal abuse and humiliation.

Under Israeli military law, Palestinian children have no right to a lawyer during interrogation. Confessions that are often coerced through ill-treatment are routinely used in military courts to sentence children to prison terms.