Ramallah, January 1, 2017—West Bank children suffered the highest losses of the past decade with 32 child fatalities at the hands of Israeli forces and security guards in 2016. In Gaza, children slipped deeper into poverty, as the blockade began its ninth year, with some still living in protracted displacement.

Significant numbers of West Bank children were also displaced as Israel carried out a record-breaking pace of home demolitions, even as the number of Jewish-only settlements increased. Equally alarming, Israel’s systematic military detention of Palestinian children showed no signs of abatement.

The violent period which began in October 2015 after tensions broke out at the Al-Aqsa Mosque compound in Jerusalem, continued throughout 2016. Frequent clashes erupted between Palestinians and Israeli forces across the West Bank, including East Jerusalem, with Israeli soldiers routinely employing an excessive use of force.

Of 32 children killed in the West Bank, including East Jerusalem, by Israeli forces and security guards in 2016, 24 were accused of committing some kind of an attack. However, in several cases, DCIP evidence and Israeli internal investigations determined that the child did not pose a direct, mortal threat at the time they were killed.

In fact, Israeli forces appeared to be implementing a shoot-to-kill policy, which, in some cases, may amount to extrajudicial killings. International law requires that intentional lethal force be used only when absolutely unavoidable.

In addition to this high death toll, DCIP documented 82 injuries to Palestinian children, more than half by live ammunition.

Crowd control weapons have also proved fatal in some cases. Faris al-Bayed, 15, died from his injuries on December 23, two months after Israeli soldiers shot a rubber-coated metal bullet at his head, which entered his skull and lodged in his brain. In another blatant example of the misuse of crowd control weapons, Israeli forces fired a sponge-tipped plastic bullet at 10-year-old Muhyee Tabakhi’s chest on July 19, killing him.

Crowd control weapons are only “less lethal” when fired at the lower body, from a distance of 50-60 meters (164-197 feet) and not aimed at children, as stipulated by Israel’s own military regulations.

In Gaza, Israeli forces shot a white flare, not authorized for crowd dispersal, at 15-year-old Abdel-Rahman al-Dabbagh on September 9. DCIP obtained footage proving the flare lodged in his head, setting the child on fire, at a time when he did not present a direct threat to soldiers.

Accountability for shootings by Israeli forces is extremely rare. Only one incident, the fatal shooting of Nadeem Nawara, 17, in May 2014, has resulted in both an investigation and indictment.

In December 2015, Israeli police live-fire regulations were updated, permitting officers to use live-fire against an individual who appears to be throwing or about to throw a firebomb, fireworks or is using a slingshot. This is one of several increasingly aggressive policy changes that appear to target Palestinian youth.

Israel has the dubious distinction of being the only country in the world that systematically prosecutes between 500 and 700 children each year in military courts lacking fundamental fair trial rights. Children within the Israeli military system commonly report physical and verbal abuse from the moment of their arrest, and coercion and threats during interrogations.

Amid heightened violence in the fall of 2015, the number of Palestinian children detained in the Israeli prison system skyrocketed. At the end of February 2016, 440 Palestinian children were in the Israeli prison system, the highest known total since January 2008 when the Israel Prison Service (IPS) began sharing data. Among them were 104 children between the ages of 12 and 15. The IPS stopped consistently releasing data since May 2016.

DCIP collected affidavits from 158 West Bank children detained and prosecuted under the jurisdiction of Israeli military courts in 2016. The data shows that 62 percent of children endured some form of physical violence following arrest and 52 percent were verbally abused, intimidated, or threatened.

Of the 158 children, 25 were held in solitary confinement for an average period of 16 days for interrogation purposes, an alarming increase over the previous year. The longest period of isolation for a child that DCIP documented in 2016 was 29 days.

Five Palestinian children were placed in administrative detention following accusations of inciting or threatening to commit violence in Facebook posts.

International juvenile justice standards, which Israel has obliged itself to implement by ratifying the UN Convention on the Rights of the Child (CRC) in 1991, demand that children should only be deprived of their liberty as a measure of last resort and must not be unlawfully or arbitrarily detained.

On August 2, the Israeli Knesset, or parliament, passed a law that enables Israeli authorities “to imprison a minor convicted of serious crimes such as murder, attempted murder or manslaughter even if he or she is under the age of 14,” according to a Knesset statement. The actual serving of the sentences would be deferred until the minor reaches the age of 14. Thirty-two members of the Knesset voted in favor, while 16 voted against, and one abstained.

Israel’s civilian criminal justice system previously had prohibited custodial sentences for children under 14 in accordance with international juvenile justice standards. Israeli military law, which applies to Palestinians, including children, in the occupied West Bank, already allowed imprisonment for any person 12 years and older. Under both Israeli civilian law and military law, children under the age of 12 cannot be held criminally responsible.

The legal distinctions between East Jerusalem and the West Bank trace back to 1967, when Israel captured the eastern part of the city and declared all of Jerusalem its “indivisible” capital. Since then, Palestinian children who happen to live in Jerusalem fall under Israeli civilian law.

Children in East Jerusalem are generally subject to the Israeli Youth Law, which theoretically applies equally to Palestinian and Israeli children. However, documentation collected by DCIP shows Israeli authorities implement the law in a discriminatory manner, denying Palestinian children in East Jerusalem of their rights from the moment of arrest to the end of legal proceedings.

Palestinian youth convicted of throwing stones in Jerusalem in 2016 felt the effects of changes to the Israeli penal code from the previous year that increased customary punishment. A Jerusalem court in March sentenced Saleh E.,16, to 39 months and Murad A.,14, to 36 months in prison. DCIP documented eight other Palestinian youths who received sentences between 12 and 28 months in 2016.

Even though the Israeli Youth Law is supposed to safeguard a child’s freedom, acknowledging their protected status, judges have complete discretion in cases involving minors and the policy changes swayed them to issue harsher judgments. 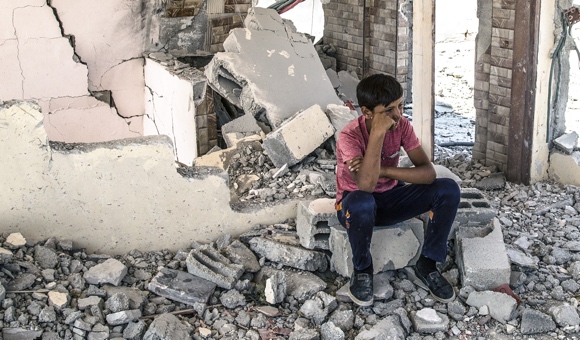 According to the United Nations Office for the Coordination of Humanitarian Affairs (OCHA) Israel demolished, dismantled, or confiscated 1090 Palestinian-owned structures in the West Bank, including East Jerusalem between January 1 and December 31, 2016, displacing 1620 Palestinians, including 772 children.

By August 2016, Israeli demolitions of Palestinian structures had already exceeded any annual totals recorded by OCHA, since the UN agency began comprehensively tracking the issue in 2009.

Since 1967, Israel has pursued a policy of demolishing and dismantling Palestinian homes and their related infrastructure for punitive purposes or a lack of building permits. Demolitions deny Palestinians the right to live securely and deny children an adequate standard of living, education, health, and psychological well-being.

Israeli authorities refuse the majority of applications for building permits by Palestinians in Israeli-controlled Area C, which comprises 60 percent of the West Bank, forcing them to build homes without the necessary permits.

Punitive demolitions are intended to stymie attacks by Palestinians against Israel and are an act of collective punishment against the families of suspects or perpetrators. As of December 31, OCHA reports that Israel has demolished 29 structures in punitive actions in 2016, displacing 142 people, including 58 children.

In several recent cases documented by DCIP, the accused assailant had already been killed or jailed before Israeli carried out the punitive demolition.

Israel’s 50-day military offensive between July 8 and August 26, 2014, dubbed ‘Operation Protective Edge,’ devastated the Gaza Strip, leaving at least 547 Palestinian children dead, 535 of them as a direct result of Israeli attacks, and a further 3,000 injured, according to DCIP documentation.

The offensive continues to impact the lives of the 1.9 million people living in the tiny 25 square mile coastal enclave. Slow reconstruction and damaged infrastructure have prolonged the plight of the half a million Gazans made homeless by the relentless bombing campaign, which destroyed 20,000 homes, leaving Gazans in a state of humanitarian crisis.

During the offensive, Israeli forces discharged some 70,000 explosive ordnances, approximately 10 percent of which failed to explode, leaving Gaza highly contaminated with around 7,000 unexploded explosive remnants of war (ERW.) Although many have since been removed, ERWs from previous offensives remain, and the total of unexploded ordnances remains unknown, posing a threat to the life and health of Gazan children.

Justice and accountability have remained elusive, despite overwhelming and repeated evidence of war crimes committed by Israeli forces during the 2014 military assault on Gaza, including direct attacks on civilians, as well as indiscriminate and disproportionate attacks on civilian homes, schools, and residential neighborhoods. The international community has failed for another year to hold Israeli forces or officials accountable for human rights violations against Palestinian children during the offensive.

In 2016, DCIP marked its 25th anniversary. Since 1991, DCIP has provided free legal services to thousands of Palestinian children arrested in the Israeli military detention system and has advocated for justice and accountability for rights violations committed by Israeli forces and settlers. For the last 25 years, we have supported Palestinian children in their greatest moment of need. Over the next 25 years, we will build them a safe and just future.

News | Fatalities and Injuries | Military Detention | Right to a Childhood