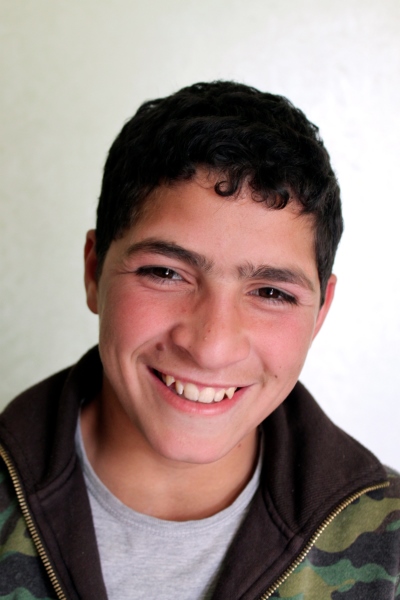 Ramallah, April 18, 2013—Loud knocking on the front door late at night woke up the Alami family. Three heavily-armed Israeli soldiers had come to arrest Muhannad, then 13, from his home in the southern West Bank town of Beit Ummar on suspicion of stone-throwing.

With little she could do to stop them from tying her son’s hands behind his back with a single plastic cord and blindfolding him, Muhannad’s mother managed to give him a jacket to stay warm during spring’s early morning chill.

The family watched as the military jeep drove away with their son into the night last April. Muhannad said that the soldiers roughed him up, including slapping him on the face, while he sat on the metal floor of the vehicle. Around 4 am, nearly two hours after his arrest, Muhannad arrived at Etzion detention facility, south of the West Bank town of Bethlehem.

Alone, bruised and scared, he faced a gruelling 5 hours of questioning. His interrogators told him they had photographs showing he threw stones, and if he confessed, they would release him. Despite the threats and verbal abuse, he remained silent.

Convicted of stone-throwing, Muhannad served a total of six months in Israel’s Ofer prison just outside Ramallah. His family was prevented from visiting him for the first two and a half months.

It came as a complete surprise to Muhannad when one morning early July, his brother, Muhammad, then 17, was brought in to share his prison cell. Muhammad, like his brother, was also convicted of stone-throwing. The two spent nearly four months together in Israeli detention.

In just the first few months of 2013, Israeli soldiers entered Beit Ummar 35 times, arresting 17 people, of which seven were children, according to DCI-Palestine sources. The boy’s father, Zuheir, a teacher at a public school in Beit Ummar, told DCI-Palestine that 15 of his students were in Israeli custody.

Between 2011 and 2012, DCI-Palestine lawyers represented seven cases of brothers getting caught up in Israel’s military detention system. In three of the cases, the brothers were from Beit Ummar.

Beit Ummar, where the boys live, is in close proximity to the Israeli settlements of Karmei Tzur, Kfar Etzion, and Migdal Oz. Often times, towns situated near settlements or Israel’s controversial separation wall, which snakes through East Jerusalem and the West Bank, become flashpoints for clashes between Palestinian youth and Israeli forces.

Sitting on a mattress next to his father and two brothers in their small living room, Muhammad seemed reluctant to speak about the time he spent behind bars last year. He recalled how when he arrived at Ofer prison, he immediately began asking to be placed with his brother. “I felt responsible for him,” said Muhammad, staring intently at the ground. “He is too young to be put in prison.”

Despite being sleep deprived and interrogated for hours, he felt relief to finally see his brother after being apart for more than three months. Looking away, Muhannad also admitted feeling happy to see Muhammad that day.

It is confusing for the boys, says Leila Atshan, a psychosocial consultant at UNICEF, because each is glad not to go through the experience alone, but neither wants to see the other locked up.

Time dragged in prison. Even when they were let out to the yard, the boys said they often just sat around. Both described random night time security checks that left them feeling nervous and unable to return to sleep. “The goal was to destroy our psychological well-being,” said Muhammad.

While talking about his experience in jail, Muhammad appeared pensive, at times sullen, and often fell into silence, whereas Muhannad exuded bravado and energy, but struggled to openly admit that time behind bars took its toll on him.

Muhannad completed his jail term a week before his older brother. His mother, Kholoud, said he had changed in prison. “He now seems nervous most of the time and answers back all the time.”

Though he caught up with his classes within 20 days and passed school exams, Muhannad said he did not care for studying, preferring to work instead. Muhammad, on the other hand, was eager to delve into his studies and continue his education beyond high school.

Muhammad might be coping by assuming the “good son” role, said Atshan, and trying to regain his position as the big brother to his younger siblings.

It was emotionally devastating on the parents to have both of their sons locked up. They had just received a permit from the Israeli authorities to visit Muhannad when they found out that Muhammad had been arrested.

“When my cousin’s son came to the house and told us that Muhammad had been arrested it was very difficult information to receive,” said their father, Zuheir. “We were already living in one catastrophe and all of a sudden they became two.”

The family of seven, supported by the salary of a public school teacher, was unable to pay the fine for either sons. For Muhannad, that meant spending an additional two and a half months in prison. Meanwhile, their mother attended the court hearings they had once a week, which took up most of her day and left her unable to care for her two younger children.

“For sure it's very hard for the parents to have two sons in jail, and not be able to pay for them, which creates guilt for the parents," said Atshan. "The boys also feel guilty for putting their parents through this."

The experience has left their mother worried about her younger children also getting arrested one day. “As long as there is occupation,” she says, “there is that fear.”