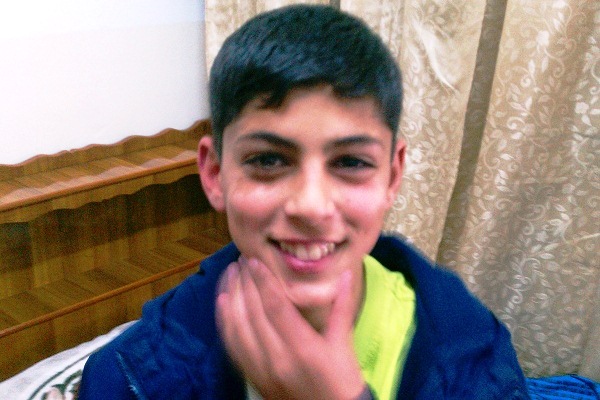 Mohammad K, 14, an American citizen, was arrested and mistreated by Israeli soldiers during a predawn raid on his home in the West Bank town of Silwad on Friday.

Ramallah, April 10, 2013—Addameer and Defence for Children International Palestine expressed deep concern about the arrest and mistreatment of a Palestinian child with dual American citizenship by Israeli soldiers in the West Bank town of Silwad on Friday.

Israeli forces detained Mohammad K, 14, on suspicion of stone-throwing during a predawn raid on his home, according to his father. Israeli soldiers tied his hands and roughed him up while transferring him for interrogation at a nearby police station. Mohammad was unaccompanied by his parents during questioning, but heard his father arguing to see him. After interrogators told Mohammad they would release him to his father if he cooperated with them, he confessed.

“Mohammad was arrested without a warrant, denied access to an attorney, and interrogated without the presence of a parent,” said Randa Wahbe, advocacy officer at Addameer. “There is also evidence that he was mistreated during his arrest and transfer. It is difficult to find a right that was not violated.”

Mohammad is being held at Ofer prison in the West Bank, according to his lawyer, Firas Sabah of Addameer. On April 7, he appeared before an Israeli military court judge, who granted the prosecution’s request to extend the interrogation period. Mohammad complained to the judge about the physical abuse he endured during arrest and questioning. His father was particularly concerned for Mohammad’s wellbeing because he has suffered from a heart murmur since birth.

“In every way, this is a typical case involving the arrest and mistreatment of a Palestinian child by Israeli forces,” said Ayed Abu Eqtaish, Accountability Program director at DCI-Palestine. “Sadly, night time arrests and the abuse of children are systematic within the Israeli military detention system. This case is exceptional only because the child happens to also have US citizenship.”

Some form of physical violence during arrest, interrogation and pretrial detention occurred in nearly 79 percent of cases documented by DCI-Palestine in 2012. In more than half of those cases, children were arrested from the family home between midnight and dawn.

In March, there was a total of 4,812 Palestinians being held in Israeli jails, according to Addameer. Of those, 236 were children aged 12-17, based on DCI-Palestine research.