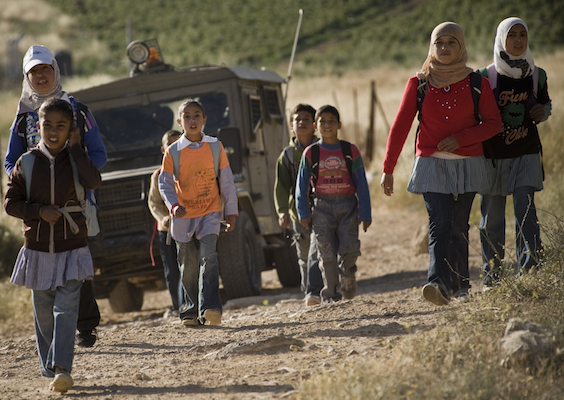 It will be nine years this November since the Israeli military began escorting children to their school in At-Tuwani to curb violent attacks by masked settlers. While the number of attacks is down, writes Defense for Children International Palestine’s Anna Pasotti, lax execution of the military escort still leaves children vulnerable to harassment, intimidation and violence.

Ramallah, 10 September 2013—Huddled together, 16 children, between the ages of 6 - 16, walk to school on the main road connecting the villages of Tuba and Maghayir al-Abeed with At-Tuwani, in the South Hebron hills. Every one of them looks anxious, for good reason. It's a dangerous route prone to violent Israeli settler attacks. Their safety rests in the hands of a few Israeli soldiers tasked with escorting them part of the way across.

“We tried to hurry up,” says one of the soldiers to international volunteers awaiting the children at the end of the main road, near the closed military area known as Firing Zone 918.

The soldier seems nervous, perhaps aware of the odd circumstances of this daily routine. The military jeep behind him honks at the volunteers, letting them know they need to head out of the immediate area. The soldier gets back in the vehicle and they speed off to Maon settlement. The children begin to ease up as they make their way to school on the quiet streets of At-Tuwani.

It will be nine years this November since the military began escorting the children to curb violent attacks by masked settlers.

The children use the shortest route – about 25 minutes on foot – to the only school in the area, passing between the Israeli settlements of Maon and Havat Maon. This main road, once an essential passageway to At-Tuwani and the nearby city of Yatta, now lies closed to all other Palestinian residents. Israeli soldiers drive a military jeep alongside the children past the two settlements in the morning and after school.

A particularly malicious attack by 12 masked settlers in September 2004 against a group of children and international volunteers precipitated implementation of the military escort. One of the settlers struck Miriam, 6 years old at the time, on the head with a stick. They also severely beat two volunteers.

Not much has changed since then, says Miriam, now a sophomore, who continues to fear settlers on the way to school with her nine siblings.

While the number of settler attacks is down, lax execution of the military escort still leaves children vulnerable to harassment, intimidation and violence.

Between 2004 and 2010, Christian Peacemaker Teams and Operation Dove, international nonviolent peace groups that maintain a presence in At-Tuwani and the South Hebron hills, documented over 100 incidents of settler aggression against children. Soldiers seldom get out of the jeep when settlers attack the children.

Operation Dove tells Defense for Children International Palestine that the military escort often comes late and leaves the children before they clear the settlements.

Ali, a 9th grader, says that sometimes they miss the first class because the soldiers show up late, but adds that at least the soldiers no longer harass them. “They used to speed ahead in the jeep, forcing us to run after them.”

The Israeli army frequently switches out the soldiers on escort duty, according to international volunteers.

“It’s a weird situation,” says one of the volunteers, while watching the children walk home with the soldiers after school. “The soldiers escort the children to and from school to protect them from violent settlers, only to find themselves later in the day arresting these children for confronting the settlers harassing them.”

Repeated phone calls and emails for comment on this story to the Israeli army Spokesperson’s Unit went unanswered.

Principal Iyad al-Masri says that when the children arrive to school, they are tired and have trouble concentrating in class. “We have asked for permission to get a school bus for the road, but it has been denied,” he says.

“Children pretend to be sick to miss school,” says Miriam’s older brother, Ahmad. “Sometimes they dream of the settlers beating them up or being arrested by the same soldiers who walk them to school.”

The problem, says Nasser al-Adara, a member of the Southern Hebron Hills Popular Committee, is the settlers. They seize our land, control our movement and isolate us from nearby villages, he says, and they use intimidation and violence to do it.

“The settlers target children because they want to instill fear in them at a young age, and ensure they grow up knowing their limits,” says al-Adara. “Make no mistake, the soldiers are here to protect the settlers, but at least the escort for now allows the children to get to school.” 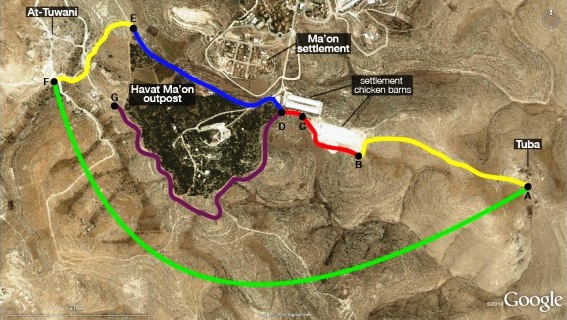 The road between Tuba and At-Tuwani. Children’s route to school and places of attack.
(Christian Peacemaker Teams / Operation Dove)

D — Junction where military escort often stops (either to wait for the children in the morning, or to end the escort after school)

A-F — Longer, alternative trails children take when there is no military escort