Palestinian Youth and the Failure of Oslo 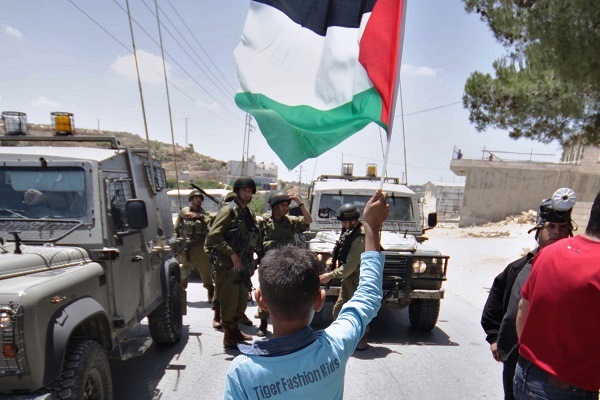 A generation of Palestinian children have been shot, shelled and bombed in Oslo’s shadow. (Ala Khouri)

Perhaps the most significant aspect of the Oslo Accords' 20th anniversary and context of recent talks is that now nearly half of the 4.4 million Palestinians living in the West Bank and Gaza Strip are under 18, and have come of age in Oslo’s shadow, writes Brad Parker in The Daily Beast.

Ramallah, 19 September 2013­—As recently renewed negotiations continue between Israeli and Palestinian officials for the first time since 2010, the agreement that initially led to negotiations, the Oslo Accords, turned 20 years old on Friday. Perhaps the most significant aspect of the anniversary and context of recent talks is that now nearly half of the 4.4 million Palestinians living in the West Bank and Gaza Strip are under 18, and have come of age in Oslo’s shadow.

Instead of growing up with a law-based, negotiated settlement founded on universal human rights principles, justice and respect for human dignity; Palestinian youth have had their futures stifled and suppressed by systemic discrimination, constant settlement expansion, and prolonged military occupation.

While the US-dominated Oslo negotiating process should have concluded by May 1999, it has dragged on for decades. The guise of a “peace process” has enabled successive Israeli governments to pursue and implement policies that have crushed the dreams and aspirations of an entire generation.

Israel is the only nation that automatically and systematically prosecutes children in military courts that lack basic and fundamental fair trial guarantees. Israeli military court judges, either active duty or reserve officers in the Israeli army, rarely exclude evidence obtained by coercion or torture, including confessions drafted in Hebrew, a language most Palestinian children do not understand.

Since 2000, at least 8,000 Palestinian children have been arrested and prosecuted in an Israeli military detention system notorious for the widespread and systematic ill-treatment and torture of Palestinian children. During 2012, 74 percent of Palestinian kids suffered some form of physical violence during arrest, transfer or interrogation, according to Defense for Children International Palestine documentation. At the end of July, 195 Palestinian kids were held in Israeli military detention, including 35 aged 12 to 15. They are overwhelmingly accused of throwing stones.

Despite clear prohibitions under international law, Israel continues to use solitary confinement against Palestinian children solely for interrogation purposes. In 99 percent of cases, Palestinian kids are denied access to counsel prior to and during interrogation. A child’s initial appearance in the military court is usually when he first sees a lawyer and his family.

In addition to being arrested and ill-treated, a generation of Palestinian children have been shot, shelled and bombed in Oslo’s shadow. Their homes and schools have been attacked and children have witnessed numerous horrific and tragic events. They have lost parents, siblings, grandparents, aunts, uncles, cousins and neighbors, as well as their own legs, arms and other body parts.

Repeated military offensives on Gaza and a draconian six-year-old blockade have led to persistent allegations of collective punishment of the civilian population, a violation of international humanitarian law. Since the outbreak of the second intifada in 2000, Israeli forces are responsible for the death of more than 1,000 children in the Occupied Palestinian Territory, according to evidence collected by Defense for Children International Palestine.

Fearing that any criticism would lead to the breakdown of talks, the international community has failed to hold Israel accountable to international law or for grave human rights violations against Palestinians. This failure has provided tacit approval of the persistent denial of Palestinian rights, which are systemic to Israel’s 46-year-old military occupation.

The renewed talks, brought about by pressure from the US and Israel, continue to demand peace without justice. The current “peace process” simply allows Israeli officials to continue, with the full backing of the US government, the same policies that have contributed to perpetuating the status quo for the past two decades. The diplomatic and political obsession with the Oslo process should not obscure the need for justice, accountability and respect for human dignity.

If current negotiations fail to address impunity or stipulate a vision for the future that incorporates a rights-based framework recognizing universal human rights principles and respect for human dignity, then the failure of Oslo will simply continue.

Brad Parker is an attorney and international advocacy officer with Defence for Children International Palestine. This article was originally published on The Daily Beast:
http://www.thedailybeast.com/articles/2013/09/19/palestinian-youth-and-the-failure-of-oslo.html.