The bill establishes annual certification and reporting obligations on the Secretary of State to show that no U.S. funds have been used by the Israeli government to support the prohibited activities included in the legislation. The McCollum bill also requires oversight reporting detailing the Israeli government’s human rights violations against Palestinians.

The legislation also calls for the Government Accountability Office (GAO), a legislative branch government agency that provides auditing, evaluation, and investigative services for lawmakers, to submit a report to Congress detailing Israel’s expenditures for offshore procurement.

“Palestinian youth have had their futures stifled and suppressed by systemic discrimination, constant settlement expansion, and an Israeli military occupation with no end in sight,” said Brad Parker, Senior Adviser, Policy and Advocacy at DCIP. “This latest bill recognizes the human experience and impact of occupation and unapologetically demands basic conditions on U.S. taxpayer funding to Israel. The recognition of the systemic impunity and injustice inherent in Israeli military occupation for Palestinian children and families is long overdue.”

The McCollum bill is the most expansive bill addressing Palestinian human rights to be introduced in the U.S. Congress and builds on previous legislation introduced by McCollum in the two previous congressional sessions. The legislation was introduced with 13 original cosponsors, including Reps. Alexandria Ocasio-Cortez (D-NY), Rashida Tlaib (D-MI), Jamaal Bowman (D-NY), Cori Bush (D-MO), and Ayanna Pressley (D-MA).

“Peace can only be achieved by respecting human rights, especially the rights of children, and this includes the U.S. taking responsibility for how taxpayer-funded aid is used by recipient countries, Israel included,” said the Democratic congresswoman from St. Paul, Minnesota after she introduced the bill. “Congress must stop ignoring the unjust and blatantly cruel mistreatment of Palestinian children and families living under Israeli military occupation.”

In addition to the funding restrictions, the bill requires the Secretary of State to submit reports describing the nature and extent of detention, interrogation, abuse, or ill-treatment of Palestinian children by Israeli military forces or police in violation of international humanitarian law and the seizure, appropriation, or destruction of Palestinian property in the Israeli-controlled and occupied West Bank by Israeli authorities in violation of international humanitarian law.

Finally, the bill requires the GAO’s Comptroller General to submit an annual report to Congress examining the nearly $800 million provided to Israel annually that is designated specifically for procurements in Israel, funds commonly referred to as “offshore procurements.”

The bill directs the Comptroller General to identify the specific programs and items funds for offshore procurement in Israel have been allocated to, including specific armed forces branches, units, and contractors. The GAO would assess executive branch compliance with legislative requirements governing offshore procurements in Israel and identify, in detail, all end-use monitoring the Government of Israel is subject to with respect to United States-origin defense articles, including an assessment of the manner and extent to which these funds have directly or indirectly supported illegal Israeli settlement activity in the occupied West Bank. 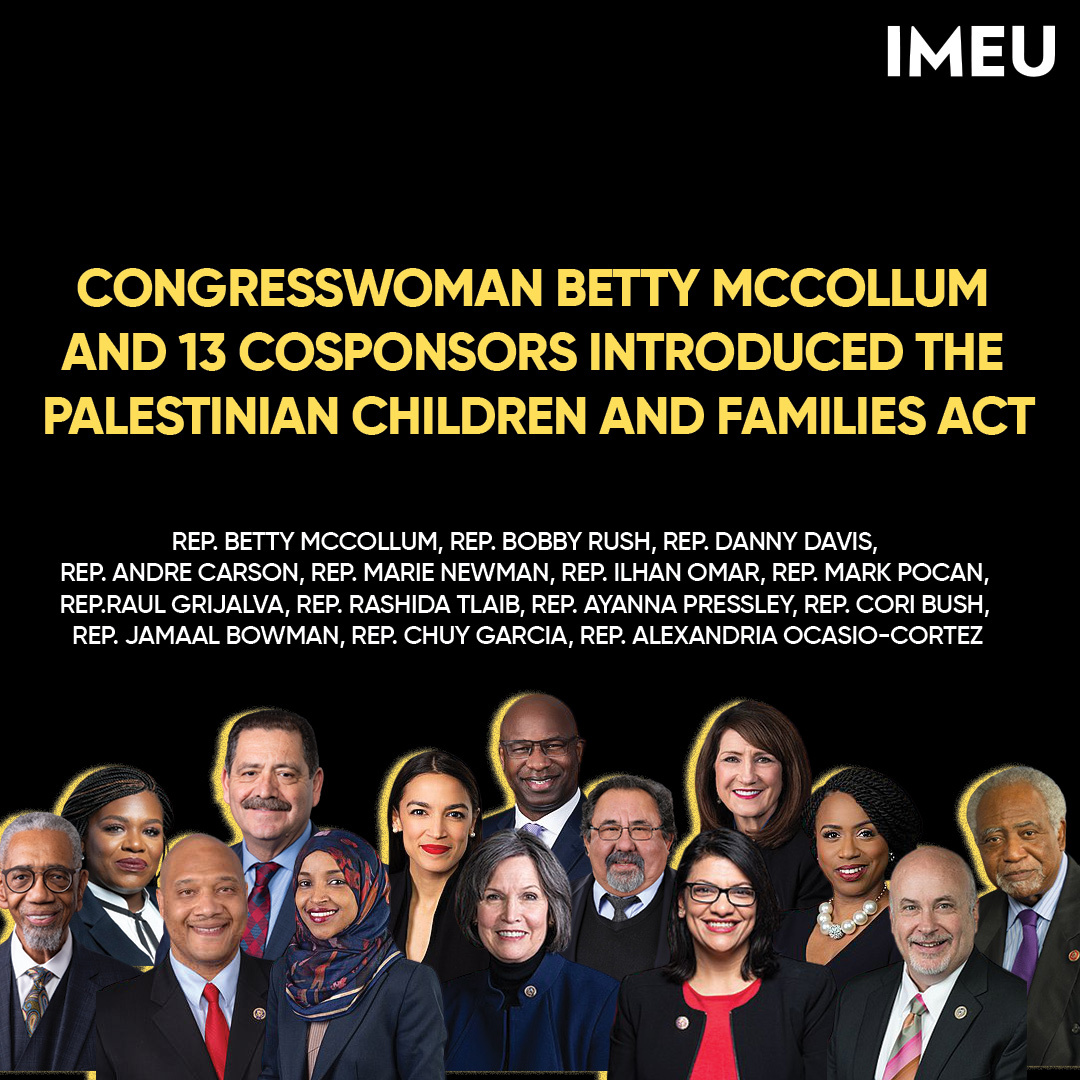 A broad coalition of more than 90 organizations endorsed the bill, including Defense for Children International - Palestine, the American Friends Service Committee, the Movement for Black Lives, Justice Democrats, J Street, and Jewish Voice for Peace Action.

“I strongly believe there is a growing consensus among the American people that the Palestinian people deserve justice, equality, human rights, and the right to self-determination,” said McCollum. “The unprecedented endorsement of this bill by human rights organizations as well as Christian, Jewish, and Muslim organizations is indicative of an energized movement in support of human rights for Palestinians. It is time for Americans, especially Members of Congress, to stand with Palestinians and Israelis who seek a future of peace and justice.”

A Champion for Palestinian Rights

The Palestinian Children and Families Act is the fourth piece of legislation introduced by Rep. McCollum that focuses on Palestinian human rights, and the third that clearly highlights Palestinian children's rights and the Israeli military detention and court system.

Rep. McCollum introduced two bills, H.R. 2407 and H.R. 8050, during the 116th Congress, which ended in January 2021. H.R. 2407, the Promoting Human Rights for Palestinian Children Living Under Israeli Military Occupation Act, introduced in April 2019, sought to ensure that U.S. taxpayer funds provided to the Government of Israel were not used to support the widespread and institutionalized ill-treatment of Palestinian children detained by Israeli forces and prosecuted in Israeli military courts lacking basic fair trial protections. At the end of the 116th Congress, H.R. 2407 had the support of 25 members of Congress.

She introduced H.R. 8050, The Israeli Annexation Non-Recognition Act, in August 2020. That bill would have prohibited federal departments or agencies from recognizing, or implying recognition of, any claim by Israel of sovereignty over any part of the occupied West Bank in violation of international humanitarian law or customary international law. It also sought to prohibit the use of certain federal funds to support specified activities in West Bank territory that has been unilaterally annexed by Israel or to facilitate or support such annexation. 11 members of Congress cosponsored H.R. 8050.

McCollum’s groundbreaking legislation H.R. 4391 or the Promoting Human Rights by Ending Israeli Military Detention of Palestinian Children Act was introduced in November 2017 in the 115th Congress and gathered support from a total of 31 members of Congress. H.R. 4391 was the first-ever bill introduced in Congress that focused on Palestinian human rights.

During the Obama administration in 2015 and 2016, Rep. McCollum also led efforts on two letters that raised grave concerns about the conditions of Palestinian children in Israeli military custody.