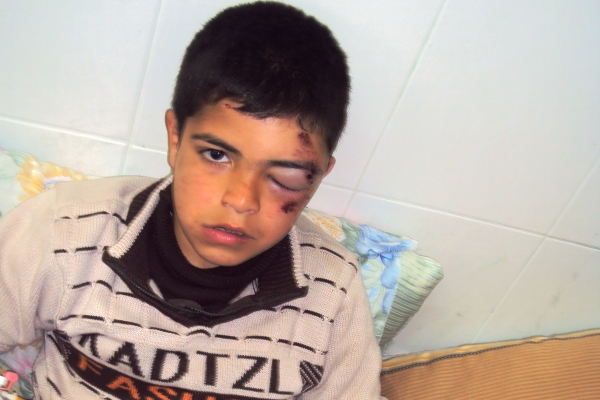 Ramallah, 12 March 2013—An Israeli settler pelted two young Palestinian children with rocks on Monday after spotting them on the roof of their home in the southern West Bank city of Hebron, seriously wounding one of them.

One of the stones thrown by the settler struck Yassin K, 9, in the eyebrow, causing him to fall down on concrete and fracture his left arm, DCI-Palestine sources said. He was admitted that afternoon to Alia Hospital with a severely swollen face. Yassin’s younger brother escaped unharmed. Eyewitnesses saw the settler, who they described as a tall, bearded man in his 30s, crouching behind a plastic bin filled with stones on a nearby rooftop in the al-Qazazin neighborhood of Hebron’s Old City.

“A small, but extremely violent, Israeli settler presence in Hebron torments the city’s Palestinian residents, including children, with all forms of abuse and harassment,” said Ayed Abu Eqtaish, Accountability Program director at DCI-Palestine. “This highly abnormal situation instills a deep-grounded fear in children who grow up witnessing settler attacks carried out with complete impunity.”

Settlers in the area store rocks in plastic bins on their rooftops to throw at Palestinian residents, according to DCI-Palestine sources. In Hebron, the close proximity of settlements to the Palestinian population lends itself to particularly frequent attacks. Yassin’s family home borders housing in the Avraham Avinu settlement, located near the Old City’s Jewish quarter.

During the 1990s, control over the city was divided between the Palestinian Authority and Israeli forces, with the Old City and the Israeli settlements of Avraham Avinu, Beit Romano, Beit Hadassah and Tel Rumeida falling under the latter’s jurisdiction.

Israel deploys around 2,000 soldiers in and around Hebron city center to protect approximately 550 Israeli settlers living among 170,000 Palestinians.

All Israeli settlements in the West Bank and East Jerusalem are considered illegal under international law. A recent UN report calls on Israel to “cease all settlement activities without preconditions” and to “immediately initiate a process of withdrawal of all settlers from the Occupied Palestinian Territory.”

Settlements have a profound impact on the lives of Palestinians throughout the West Bank, including East Jerusalem. Since 2008, DCI-Palestine has documented over 100 cases of settler violence such as stone throwing, beatings, shootings and destruction of property.