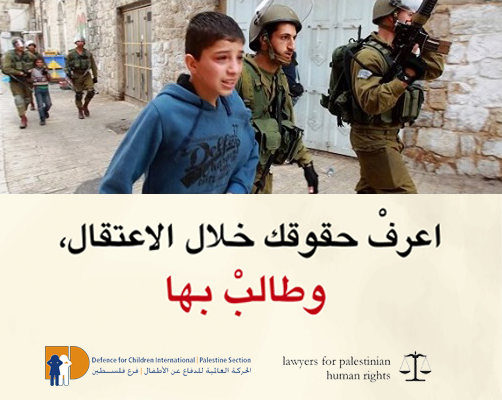 DCI-Palestine will distribute more than 5,000 “Know Your Rights” information cards over the next several weeks to Palestinian children between the ages of 12 and 17 years old living in West Bank communities where children appear to be targeted by Israeli forces for arrest.

DCI-Palestine will conduct training sessions for Palestinian children in schools to raise awareness on what to expect during the arrest and detention process. The trainings will focus on understanding relevant international human rights law concerning arrest, transfer and interrogation practices. Additionally, trainers will discuss rights found in Israeli military law and how these rights are systematically denied to Palestinian child detainees.

“Israeli military law denies basic and fundamental rights to Palestinian children detained by Israeli forces in the West Bank,” said Ayed Abu Eqtaish, Accountability Programme Director at DCI-Palestine. “Despite this, it is important to empower our youth through human rights training and information, particularly in communities targeted by Israeli forces for arrest near the separation barrier and illegal settlements.”

Israel is the only nation to automatically and systematically prosecute children in military courts that lack basic and fundamental fair trial guarantees. Around 500-700 Palestinian children, some as young as 12 years old, are arrested, detained and prosecuted in the Israeli military detention system each year. The majority of Palestinian child detainees are charged with throwing stones, and 74 percentexperience physical violence during arrest, transfer or interrogation, according to evidence collected by Defence for Children International Palestine. No Israeli children come into contact with the military court system.

Palestinian children are not properly informed of their right to silence, are denied access to an attorney before and during interrogations, and are not accompanied by a parent during questioning. The “Know Your Rights” information card emphasises awareness of these fundamental rights, which if implemented could protect children from practices involving verbal abuse, threats and physical violence used during interrogations to coerce confessions from Palestinian children.

An easy to remember telephone number is included on the card so Palestinian children can contact a DCI-Palestine lawyer 24 hours a day, 7 days a week, if they are allowed access to a telephone by Israeli authorities.

“We are seriously concerned by the glaring gaps in basic human rights protections within the Israeli military detention process and its isolating effects for Palestinian children,” said Tareq Shrourou, Director at LPHR. “Empowering Palestinian young people through clear and concise information on their fundamental rights provided by law is consequently critical.”

For more information related to the widespread and systematic ill-treatment of Palestinian children in the Israeli military detention system, read the following reports:

• Independent report by a delegation of British lawyers, Children in Military Custody, June 2012.

For a .pdf version of this press release, click here.