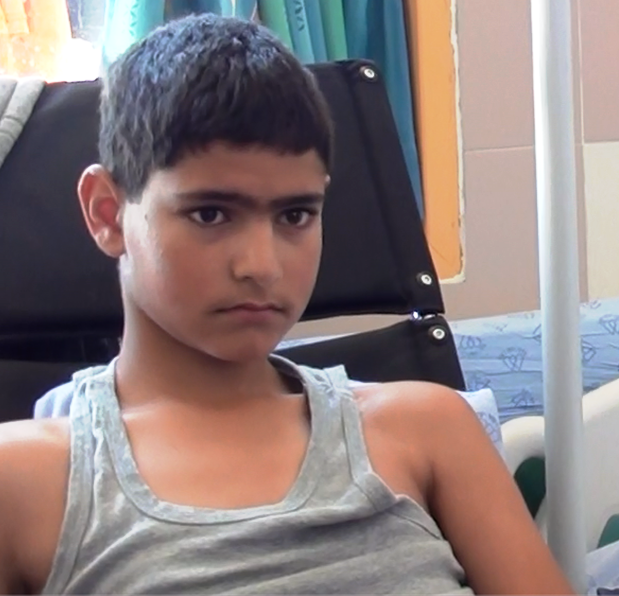 The bullet struck Atta Sabah, 12, in the stomach and exited through his back, severing his spinal cord and causing paralysis from the waist down.

With high numbers of demonstrations occurring throughout the West Bank during the first six months of 2013, lax enforcement of the Israeli army’s open-fire regulations has led to increased violence against Palestinian civilians and has perpetuated impunity.

The regulations allow soldiers to use live ammunition “only under circumstances of real mortal danger,” according to a recent report by B’Tselem, an Israeli human rights group.

Israeli forces are prohibited from firing rubber-coated metal bullets at women and children. Where firing rubber-coated metal bullets is allowed, police and military procedures state that they must only be fired from a distance of 50-60 meters (165 – 195 feet) and at the legs of people.The regulations prohibit directly targeting demonstrators with tear-gas canisters.

Despite these regulations at least 24 children have been shot and injured by live ammunition, rubber-coated metal bullets or tear-gas canisters since January 2013, including two fatalities, according to evidence collected by Defense for Children International Palestine (DCI-Palestine). While Israeli forces regulations allow the use of these weapons for crowd control in certain narrow circumstances, only a third of these cases involve children directly participating in demonstrations where clashes with Israeli forces later occurred.

In the line of fire

In February 2013, a photo depicting a Palestinian child in the cross-hairs of an Israeli army sniper flooded the Internet. This dehumanization of children has continued and hundreds have been targeted and killed or injured in military incursions or in crowd dispersal maneuvers. Since the outbreak of the second intifada in 2000, Israeli forces are responsible for the death of 1,031 Palestinian children in Gaza and 366 children in the West Bank, according DCI-Palestine documentation.

In May 2013, Atta Sabbah, 12, from Jalazoun refugee camp near Ramallah was shot by an Israeli soldier while trying to retrieve his school bag from another soldier nearby. Eyewitness reports show that the situation was calm, that no clashes were taking place at the time and there was no “mortal danger” to Israeli forces that would allow the use of live ammunition.

Contradicting eyewitness reports, when asked about the use of live ammunition against an unarmed child, the Israeli army Spokesperson’s Unit stated that "on the afternoon of May 21, 2013 a violent and unlawful riot took place in the area, with the participation of dozens of Palestinians who threw rocks and Molotov cocktails towards the soldiers.”

“I was with my friend and we were tossing our school bags to each other and he threw mine behind him. Then when I went to go and look for it I realized it was with the soldiers,” says Atta, as he tries to straighten himself on his wheelchair. “The soldier told me you can come and get it the next day and so I returned home."

Soldiers are usually stationed between the Jalazoun Boy’s School and the Bet El settlement, where Atta’s bag was thrown the previous day. Nearly 6,000 Israeli settlers reside in Bet El, a settlement built on predominantly privately owned Palestinian land. Due to its proximity to the school, soldiers and private security are always present near the school, or raiding the camp, causing tension in the area.

“[Atta] walked for about one or two meters toward the soldier,” says Mahmoud, 15, an eyewitness to the shooting. “Suddenly, he wanted to turn around and run away. At that moment, the second soldier fired one bullet and I saw Atta fall immediately.”

The live bullet struck Atta in the stomach and exited through his back, severing his spinal cord and causing paralysis from the waist down. It also caused damage to his liver, lungs, pancreas and spleen.

listen to ‘Palestinian boy, 12, just another target’ on Audioboo

Caught in the middle

“Things started moving really fast just like in the movies,” says Ahmad, 16, “I had just turned around and wanted to run off back to the [refugee] camp, when I felt something hitting me on the left side of my head, knocking me down.”

Ahmad is one of three children that have been seriously injured by rubber-coated bullets during April and May 2013 in Jalazoun. Mustafa, 17 was shot in the face by a rubber-coated metal bullet which then lodged in his nasal cavity. Majd, 16, was shot in the chest and abdomen multiple times from close range, fracturing his ribs.

When they were shot, the teens were simply in the vicinity of clashes between Palestinian youth and Israeli soldiers. They are part of an increasing number of bystanders targeted and shot during crowd dispersal maneuvers. The misconception that rubber-coated bullets are a non-lethal weapon, combined with the imprecision of using rubber bullets as a weapon has resulted in increased injuries to people to whom there is no justification to shoot.

Hamzi, 12, was entering his home to avoid clashes that had broken out in his neighborhood. In violation of Israeli military regulations, he was shot directly in the left arm with a rubber-coated metal bullet by an Israeli soldier about three meters (10 feet) away after he spotted Hamzi entering the stairwell of his building. Hamzi was struck a second time in the stomach by a ricocheting bullet as he ran up the stairs.

“I climbed a couple of steps and stopped and saw a barrel of a rifle appearing through the door,” Hamzi says. “I realized that one of the soldiers was following me.”

After shooting Hamzi, the soldier threw a tear gas canister in the stairwell. Hamzi underwent surgery on his left arm to stem the bleeding to his elbow.

In response to a video showing Israeli soldiers retreating from stone-throwing youth, Deputy Prime Minister Eli Yishai stated, “In my opinion, [Israeli forces] must make maximal use of their weapons if they feel their lives are in danger, and they must know they will receive the utmost support and understanding from all the relevant bodies if that is what they have to do."

In May 2013, the average number of civilians injured by live ammunition or rubber-coated bullets more than tripled compared to this timelast year, according to the United Nations Office for the Coordination of Humanitarian Affairs (OCHA). Since January 2013, there have been 213 Palestinian civilian casualties, compared to 63 for the same time last year.

Senior Ranking Officers have stated that violations of Israeli military open-fire regulations are “exceptions rather than the norm.” However, according to DCI-Palestine documentation 42 percent of children were shot in the face or head, 29 percent in the leg, 21 percent in the arm or chest and 17 percent in the stomach. One child was shot multiple times with live ammunition.

The majority of these families have not filed any complaints to the Israeli authorities regarding injuries incurred through use of lethal or non-lethal weapons, as they do not believe there will be any criminal case brought against soldiers.

Since 2000, Yesh Din reports only five percent of complaints submitted to the Military Police Criminal Investigations Division (MPCID) lead to an indictment. Moreover, victims of soldier crime are reluctant to speak out “for fear they may come to harm, either for the soldiers who discover they filed a complaint or by the denial of various permits.”

For Atta, he has grown up in an atmosphere where both Israeli soldiers and Jewish settlers act with complete impunity. When asked about the fate of the soldier that shot him, he replies without hesitation, “I’m not expecting anything to happen to him.”