Ramallah, December 15, 2018— A four-year-old old Palestinian boy succumbed to his wounds on December 11, four days after bullet fragments fired by Israeli forces  struck him during “Great March of Return” protests near the perimeter fence in the southern Gaza Strip.

Ahmad Yasser Sabri Abu Abed, 4, was in his father’s arms around 3:30 p.m. when he was struck by shrapnel as Israeli forces opened fire on protestors in Khan Younis, Gaza Strip, on December 7. Ahmad sustained injuries to his head, chest and abdomen which caused his death.

“Suddenly, I heard the sound of a gunshot fired by one of the soldiers and I heard the sound of something exploding in front of me,” said the child’s father. “At this moment, Ahmad screamed. I looked at Ahmad and found blood coming down from his right eye and chest and his shirt was torn."

Ahmad was treated at the European hospital in Khan Younis, according to the child’s family. An MRI revealed that shrapnel had entered Ahmad’s brain through his eye. He was held in the intensive care unit until Tuesday, when doctors pronounced him dead.

On November 21, Abdel-Rahman from the Jabal Mukaber neighborhood of East Jerusalem,  died from a serious live ammunition wound sustained on November 14. According to Israeli media, Abdel-Rahman attacked and “lightly injured” three Israeli police officers at the entrance to Oz police station before Israeli forces shot him. The child’s family told Defense for Children International - Palestine that they were unable to visit him in the hospital before his death as he was under arrest. 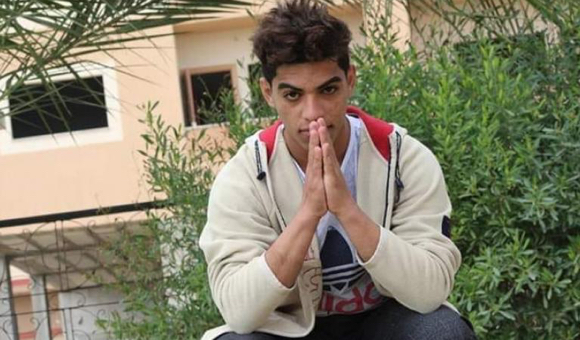 Around 2 p.m. on November 3, Israeli forces shot Emad while he was attempting to cut the perimeter fence in Deir Al-Balah in the central Gaza Strip. An eyewitness who was also shot told DCIP that he heard a gunshot and saw Emad collapse. The witness said that shortly after, Israeli forces carried Emad away on a stretcher and a helicopter arrived.

The boy’s family saw Israeli media reports that their son died in an Israeli hospital on Sunday. On November 11, the Palestinian liaison office reported Emad’s death and said Israeli forces were withholding his body, according to the boy’s family. The family also told DCIP that despite continuous communication, the Red Cross was unable to provide official confirmation of Emad’s death, saying that the Israeli military had not provide them information.

This year has proved one of the bloodiest for Palestinian children, with at least 53 confirmed child deaths as the result of Israeli forces or settlers actions documented by DCIP since the start of 2018. Two further child fatalities, including Emad, are awaiting official confirmation. The majority of these deaths, were caused by live ammunition, often in the context of weekly protests and related activities taking place in the Gaza Strip.

In a number of cases, DCIP found strong evidence suggesting that children did not pose a direct threat at the time they were killed.

The “Great March of Return" demonstrations have taken place on a weekly basis in the Gaza Strip since March 30, 2018. The demonstrations are in protest of Palestinian refugees’ inability to return to properties lost during events surrounding the establishment of the state of Israel in 1948. Protestors are also demanding an end to Israel’s lengthy blockade over the Gaza Strip which is one of the main drivers of the current humanitarian crisis.