Abdel-Karim al-Dahdouh, 12, and his family sustained injuries after an Israeli missile hit a nearby target in Gaza on June 20.

Ramallah, June 25, 2014—A 2-year-old girl died on Tuesday evening in an explosion in northern Gaza that also injured her sister and two cousins. All of the children were under five years old.

The children, all from the al-Danaf family, had been playing near their home in Beit Lahia when they were hit by a homemade rocket fired by an armed Palestinian group. No faction has so far claimed responsibility for the attack.

“It is children living across the Occupied Palestinian Territory who are paying the price for the conflict,” said Ayed Abu Eqtaish, Accountability Program director at DCI-Palestine. “Since Israel began its search operation for three missing Israeli teens, with an increased military presence in the West Bank and intensified air strikes on the Gaza Strip, violence from both sides has led to children being caught in the crossfire.” 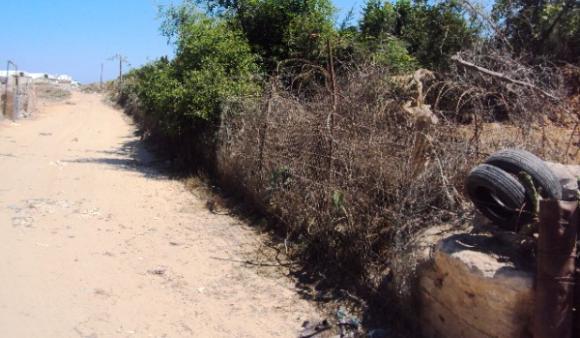 On Tuesday evening, Palestinians fired several rockets from al-Atatrah, an area of Beit Lahia in northern Gaza. The rockets, aimed at Israel, landed close to where the children were playing.

Joud al-Danaf, 2, was struck on the head and died immediately from her wounds. Her sister Amal, 4, and her cousins Hassan, also 4, and Mohammad, 2, sustained shrapnel wounds that required hospitalization.

Hassan is currently in a critical condition in the intensive care unit at Al-Shifa Hospital. In a sworn testimony given to DCI-Palestine, his father said that he is urgently seeking permission to travel abroad to obtain treatment for his son.

The death of Joud al-Danaf comes days after the shooting of a teenager in the West Bank, who was killed as a result of the Israeli military’s Brother’s Keeper operation. The operation, which was launched by the Israeli military to search for three teenage Israeli settlers who disappeared on June 12, has seen airstrikes against Gaza and violence in the West Bank intensify. This has prompted a rise in retaliatory actions from Palestinian armed groups.

Since operation Brother’s Keeper began, a total of 15 children have been injured as a result of the violence. Homes across the West Bank have been raided, resulting in clashes between civilians and soldiers.

In Gaza, five children were wounded on June 20 as an Israeli military aircraft launched a missile at a target near their home in Gaza City. The missile hit Dalloul Street in the Sabra neighborhood of Gaza City, causing an explosion which struck two houses. A total of five children and three adults were injured, including a 25-day-old baby who sustained injures to his neck, back and right hand.

Responsibility for the disappearance of the Israeli settler teenagers has been placed with Hamas by the Israeli authorities, though evidence to support this claim has yet to be produced.