Ramallah, January 3, 2014—A Palestinian teen injured by Israeli gunfire east of Jabaliya near Gaza’s border fence with Israel on Thursday died of his wounds this morning, according to news sources.

Israeli soldiers shot Adnan Abu Khater, 16, in the leg with live ammunition, which led to his death. An Israeli army spokeswoman said soldiers spotted “a number of suspects” damaging the border fence, Agence France-Presse reported. They ordered them to stop “numerous times but the suspects continued vandalizing the fence,” she told AFP. “Soldiers then resorted to aiming fire at the individuals’ lower extremities.”

“Israel routinely targets civilians in Gaza in violation of international law,” said Ayed Abu Eqtaish, Accountability Program Director at Defense for Children International Palestine. “Lack of accountability for these and previous incidents all but ensure that Israeli forces will continue to target civilians and pursue a campaign of collective punishment in Gaza.”

Hala Ahmad Salman Abu Sabikha, 2, sustained fatal injuries to her head and chest when an Israeli tank targeted her home in Al-Mughazi refugee camp, central Gaza, with three shells around 3:30 pm on December 24. Hala was reportedly outside in the yard at the time of the strike, according to evidence collected by Defense for Children International Palestine. Earlier in the day an Israeli civilian contractor, Saleh Abu Latif, 22, was shot and killed by a Palestinian sniper while working near Gaza’s border fence, according to news reports.

On December 20, Diya Ahmad Asad al-Natour, 17, was shot and wounded in the left knee during clashes between Palestinian youth and Israeli soldiers east of Jabaliya near the border fence.

Another Palestinian teen, Mohammad Rafiq Shinbari, 17, from Beit Hanoun, was shot and wounded in the leg by live ammunition fired by Israeli forces around 7:45 am on December 15 while working on farmland north of Beit Lahiya, about 500 meters (1,640 feet) from the border fence. Mohammad was transferred to Kamal Adwan Hospital, where he was operated on immediately. Surgeons used 12 platinum screws to repair the shattered bones in his leg.

Just before Mohammad was shot, a homemade rocket was reportedly launched from an unknown location about 1.5 kilometers (4920 feet) away, according to evidence collected by DCI-Palestine.

According to reports by the Palestinian Center for Human Rights, at least 11 other children, including a two-year-old girl, have been shot by the Israeli military in Gaza since the beginning of 2013, 10 of which occurred near Gaza's border fence with Israel.

Israel has imposed a blockade on the Gaza Strip since mid-2007 by strictly controlling and limiting the entry and exit of individuals; maintaining harsh restrictions on imports including food, construction materials, fuel and other essential items; as well as prohibiting exports. Israel continues to maintain complete control of the Gaza Strip’s borders, airspace and territorial waters. 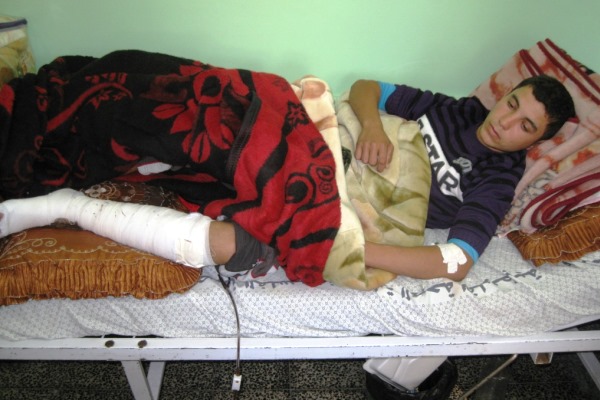