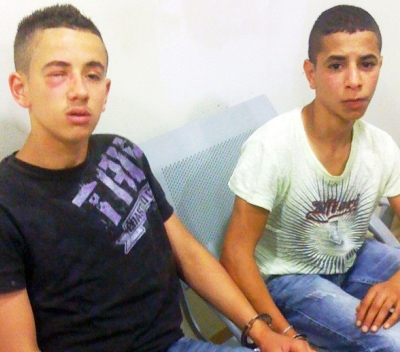 Archive Photo: Two children await interrogation at Al Mascobiya interrogation and detention facility in Jerusalem. Ill-treatment of Palestinian children in the Israeli military detention is widespread and systematic and generally occurs within the first 24-48 hours after an arrest.

Ramallah, December 4, 2013—Defense for Children International Palestine submitted complaints to the Israeli Military Police Criminal Investigations Division this week over the ill treatment of Palestinian teenagers during arrest and transfer to Ariel police station in September.

In separate incidents, Israeli soldiers severely and repeatedly beat Ali S, 14, from Azzun, Hendi S, 17, from Salfit, and Mohammad A, 15, from Tulkarem after arresting them. One soldier extinguished a cigarette butt on Ali’s lip while another burned Hendi’s arm with a cigarette, according to the sworn testimonies of the two teenagers. Hendi and Mohammad were denied access to food, water and toilet facilities for a long period. All three of them were accused of stone throwing.

This marks the second time Hendi endures ill treatment this year. In late February, DCI-Palestine submitted a complaint to the Police Internal Investigations Department over the abuse Hendi suffered during interrogation at Ariel police station in February.

DCI-Palestine has submitted a total of 10 complaints this year over the alleged ill-treatment and torture of Palestinian children by Israeli soldiers and police. In eight of the cases, Israeli authorities failed to notify DCI-Palestine whether they had opened an investigation. The remaining two cases resulted in the military advocate general’s decision to close the investigation due to insufficient evidence. Israeli authorities deem the refusal of victims to testify without the presence of a lawyer as insufficient evidence.

Since 2000, Yesh Din, an Israeli human rights group, reports that only five percent of complaints submitted to the Military Police Criminal Investigations Division have led to an indictment.

Israel’s poor record of accountability, in practice, sends a loud message that grave human rights violations against Palestinians can be committed with total impunity.