Israeli exceptionalism at the United Nations 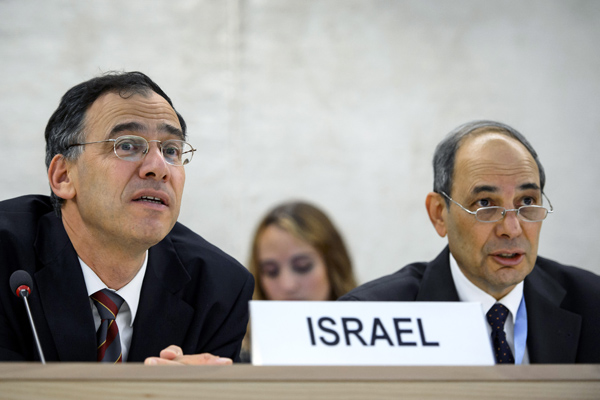 Israeli officials mistakenly dismiss criticism as the product of an ‘anti-Israel bias.’ But when a state agrees to uphold certain universal human rights and then fails to do so in practice, it would be unfair for the international community to not criticize that state, writes Brad Parker in +972 Magazine.

Ramallah, 14 November 2013­—Last month, Israel ended a 20-month boycott of the United Nations Human Rights Council when Israeli officials participated in the Universal Periodic Review, a process where every UN member state has their human rights record reviewed before the council. The process is designed “to ensure equal treatment for every country” by assessing each country based on the same body of international law. Yet, at the opening of Israel’s review session on October 29, Israel’s permanent representative to the United Nations, Ambassador Eviatar Manor, declared, “The unfair treatment of Israel must come to an end.”

To be clear, the international community is not treating Israel unfairly; Israel is simply being treated and recognized as the persistent human rights violator that it is. The deep-rooted notion of Israeli exceptionalism inherent in Ambassador Manor’s statement is consistently used to delegitimize any international criticism of Israel’s serious human rights violations against Palestinians.

If Israel wants improved standing in the international community, its leaders must take responsibility for what is truly exceptional: a 46-year-old military occupation where systemic discrimination and persistent human rights violations are deeply entrenched and impunity reigns.

In the West Bank, there are two separate legal systems operating in the same territory and the sole factor in determining which laws apply to a person are his or her nationality and ethnicity. Israeli military law, which fails to ensure and denies basic and fundamental rights, is applied to the Palestinian population, including men, women and children; while Israeli settlers living in the West Bank are subject to the Israeli civilian and criminal legal system. Aside from the blatant violation of universal non-discrimination guarantees, why is this unique?

Today, Israel is the only nation to automatically and systematically prosecute children in military courts that lack basic and fundamental fair trial guarantees. Around 500-700 Palestinian children are arrested, detained and prosecuted in the Israeli military court system each year. The majority of Palestinian child detainees are charged with throwing stones, and 74 percent experience physical violence during arrest, transfer or interrogation, according to evidence collected by Defence for Children International Palestine. No Israeli children come into contact with the military court system.

During Israel’s Universal Periodic Review session on October 29, Israel’s uniqueness was unmistakable as numerous UN member states, including the United Kingdom, the Netherlands, Germany, Ireland and others, commented on or criticized Israel’s lack of respect for international law and its systematic ill-treatment of Palestinian children in Israeli military detention.

In a system based on principles of universality and reciprocity, where a state agrees to uphold certain universal human rights and then fails to do so in practice, it would be unfair for the international community to not criticize that state. This is exactly why Israel’s persistent failure to comply with or even to respect international law makes its non-compliance an issue of unique importance to other UN member states.

Despite the fact that Israel has ratified all the major international human rights treaties, and, as a result, has bound itself to act in accordance with those treaties; Israeli authorities persistently disregard and fail to comply with international law.

In 1991, Israel ratified the United Nations Convention on the Rights of the Child (CRC). During its initial review over a decade later in 2002, the Committee on the Rights of the Child, the United Nations body that monitors implementation of the CRC, expressed serious concern regarding “allegations and complaints of inhuman or degrading practices and of torture and ill-treatment of Palestinian children” during arrest, interrogation and detention.

This past summer, over a decade later, the Committee on the Rights of the Child again reviewed Israel’s compliance with the CRC and found the situation was even worse. The Committee found that Palestinian children arrested by Israeli forces were “systematically subject to degrading treatment, and often to acts of torture” and that Israel had “fully disregarded” previous recommendations to comply with international law.

Following a March 2012 Human Rights Council vote that established an international fact-finding mission to investigate and assess the effects of illegal Israeli settlements on Palestinian rights, Israeli Prime Minister Benjamin Netanyahu called the council “hypocritical” with an “automatic majority against Israel.” Israel then severed all ties with the council.

Instead of viewing the Human Rights Council vote as a statement of international consensus condemning Israel’s illegal settlement endeavor, Israel chose to further isolate itself from the international community. As a result of the boycott, in an unprecedented move, last January Israel became the first and only UN member state to boycott its Universal Periodic Review. The move sparked intense debate among diplomats, and instead of sanctioning Israel, the Human Rights Council decided to reschedule Israel’s session for October 29.

No doubt, criticism by the Committee on the Rights of the Child, actions taken by the UN Human Rights Council and other pressure has forced Israeli leaders to respond by making slight changes to the military law applicable to Palestinian children. However, these changes undoubtedly fail to address the systematic and widespread ill-treatment Palestinian children face in the first 24-48 hours after an arrest, according to evidence collected by Defence for Children International Palestine.

Israeli officials, including Mr. Netanyahu, mistakenly dismiss any and all criticism of Israel’s persistent human rights violations against Palestinians as simply the product of an “anti-Israel bias.” The failure to recognize international condemnation of its human rights record, or to implement human rights-respecting policies will soon lead to not just a growing international consensus willing to condemn Israeli human rights violations, but one that demands actual accountability. In short, the perpetual state of exceptionalism is coming to an end.

Brad Parker is an attorney and international advocacy officer with Defence for Children International Palestine. This article was originally published on +972 Magazine: http://972mag.com/israeli-exceptionalism-at-the-united-nations/81857/.