Israeli forces shot 11-year-old Safi Ahmad Mohammad Jawabra in the head with a rubber-coated metal bullet on May 29. (Photo: Courtesy of Jawabra family)

Ramallah, July 6, 2022—Israeli forces shot an 11-year-old Palestinian boy in the head with a rubber-coated metal bullet seriously injuring him in late May in the southern occupied West Bank.

Safi Ahmad Mohammad Jawabra, 11, was shot by Israeli forces in the head above his left eye with a rubber-coated metal bullet around 10 a.m. on May 29 at the entrance to Al-Arroub refugee camp, near Hebron in the southern occupied West Bank, according to documentation collected by Defense for Children International - Palestine. Safi was walking home from school after completing his final exam in math when an Israeli soldier shot him in the head unexpectedly and without warning. While running away, another group of Israeli soldiers around 50 meters (164 feet) away fired tear gas canisters in front of Safi.

Safi was transferred by private car to Beit Fajjar clinic, then by ambulance to Al-Hussein Hospital in Beit Jala, then to Bethlehem Arab Society for Rehabilitation, also in Beit Jala. After scans and tests, doctors operated on Safi’s injury, which required 20 stitches. Safi’s left eye now has about 10 percent functionality, according to information gathered by DCIP.

Safi went to Hadassah Hospital on July 3 where his eye was examined by doctors. Safi suffers from an injury in the left part of the retina, which means he does not see if the pupil moves to the left, according to information gathered by DCIP. Doctors are monitoring his condition to ensure that the damage does not spread in the retina to the second, unaffected eye. The doctors said it is not possible to do anything else for the child’s eye at the moment.

Across the occupied West Bank, Israeli forces employ rubber-coated metal bullets, tear gas canisters, water cannons, sound grenades, and other ‘non-fatal riot dispersal methods’ to quash protests. While Israeli military regulations restrict the parameters and manner of their use, the excessive and improper use of crowd control weapons can cause serious injury, permanent disability or even death, particularly in children.

In a 2013 report, human rights group B’Tselem noted that the Israeli military’s regulations clearly state that rubber-coated metal bullets “may not be fired at women or children.”

The regulations also require that rubber-coated metal bullets only be fired at the legs, not upper bodies, of “inciters, key disrupters of order or individuals endangering the well-being of a soldier or another individual.” Military regulations further stipulate that a soldier must be at least 50-60 meters (165-195 feet) away from their target when he or she shoots rubber-coated metal bullets.

At least three other Palestinian children this year have been critically injured by Israeli soldiers firing rubber-coated metal bullets, according to documentation collected by DCIP.

Israeli forces shot Mohammad Iyad Musa Mtour, 17, in the head with a rubber-coated metal bullet around 8:30 p.m. on April 8 in the town of Ar-Ram, northeast of East Jerusalem in the central occupied West Bank, according to documentation collected by DCIP. Mohammad watched Israeli forces clash with Palestinian youth from a distance when he was shot near his left eye. Mohammad was transferred to Ramallah Hospital and then to An-Najah Hospital in Nablus where doctors ran tests throughout the night. Around noon the next day, Mohammad underwent surgery to remove his left eye. 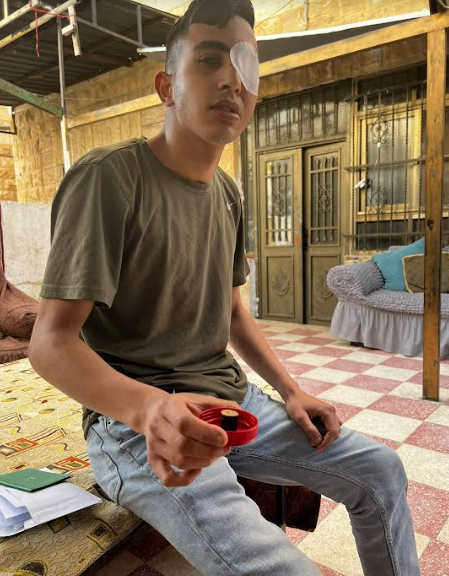 “I am very upset about losing my eye,” Mohammad told DCIP. “I feel like a stranger. I will not be able to play with my friends as I used to. My parents are too worried and scared to let me go out. I wish I could go back in time. I would have stayed in the house and kept my eye.” 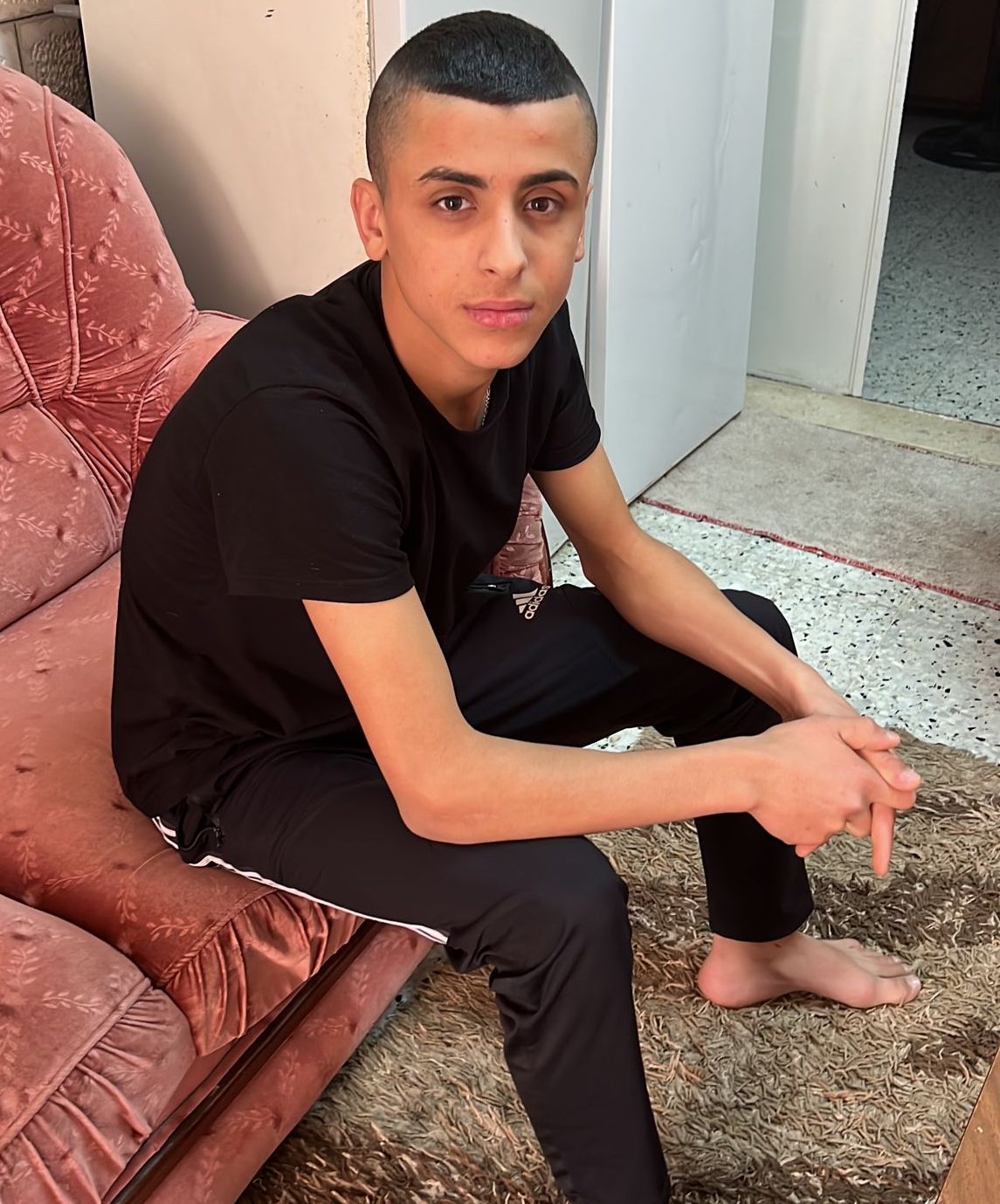 Abdullah told a soldier he was dizzy, so the soldier tightly retied his blindfold, and then Abdullah vomited and fainted. An Israeli soldier dragged Abdullah to the front gate of the military camp and then an ambulance transferred him to Abu Dis Emergency Center, after which he was transferred to Bethlehem Arab Society for Rehabilitation. Around 2 a.m., Abdullah underwent a three-hour surgery to treat a skull fracture and internal bleeding. He was discharged on April 20.

“I do not feel like a normal person,” Abdullah told DCIP. “I have severe headaches and I feel dizzy when I walk and my sight is not as it used to be.” 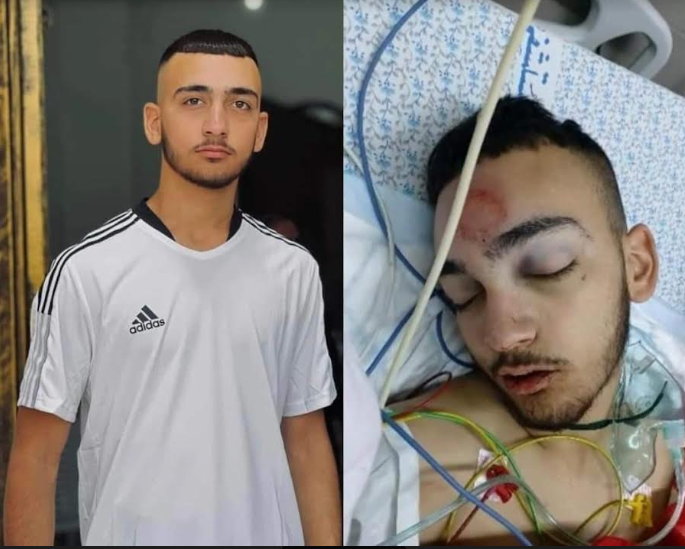 Khaled Nafeth Khaled Zeitoun, 17, was shot in the head by Israeli forces with a rubber-coated metal bullet around 6 a.m. on April 29 outside the Dome of the Rock in the Al-Aqsa compound in East Jerusalem, according to documentation collected by DCIP. Khaled was sitting outside the mosque with friends when Israeli forces stormed the courtyard and began firing rubber-coated metal bullets. Khaled was transferred to Al-Maqasid Hospital where doctors treated him for skull fractures and internal bleeding in his head and nose.