Ahmad Abu Raida was only 16 when Israeli soldiers repeatedly used him as a human shield for five days in Khuza'a, southern Gaza.

Ramallah, August 21, 2014—Israeli soldiers repeatedly used Ahmad Abu Raida, 17, as a human shield for five days while he was detained during Israel’s ground invasion of the Gaza Strip.

Ahmad, from Khuza'a, near the southern Gaza town of Khan Younis, was just 16 years old when he was taken from his family on July 23. He was forced at gunpoint to search for tunnels for five days, during which time he was interrogated, verbally and physically abused, and deprived of food and sleep. Ahmad told DCI-Palestine in a sworn testimony that Israeli soldiers attempted both to extract information from him regarding Hamas members, and recruit him as an informant, before releasing him on July 27.

Ahmad’s ordeal began on July 21, when Israeli tanks entered Khuza'a, a town where Israeli forces allegedly committed war crimes during the the ground invasion of the Gaza Strip. After two days of hiding at home, Ahmad’s family and neighbors attempted to flee intense artillery fire. As they tried to leave, however, Israeli soldiers assembled civilians, separating young men from others.

Ahmad was singled out, detained with his hands tied behind his back, and kicked and insulted by a soldier. His family was released, but lost sight of him as they fled the area.

In the days that followed, despite not being associated with Hamas, Ahmad was interrogated about his political affiliation and the location of Hamas tunnels. He managed to sleep for just two hours on the first night, sitting in a chair with his hands tied behind him. Every day he was made to search for tunnels, including at one point digging under the afternoon sun.

Speaking to DCI-Palestine, Ahmad said, "[The Captain and the soldiers] were walking behind me, with their rifles pointed at me. "Get in and see if there are tunnels or not," [the Captain] ordered me. They made me search all the rooms for tunnels. Whenever I told them there were no tunnels, they would take me out and search the room themselves."

Ahmad details an almost constant stream of abuse and threats during his detention, including kicks and punches, whips with a wire, and threats of a sexual nature. When he was left alone in a civilian house for a period, he found some note paper and wrote a secret letter to his family, believing that he would be killed. On Sunday, July 27, he was finally released. Ahmad's father confirmed that, for five days, the family believed that he was dead.

The use of civilians as human shields, which involves forcing civilians to directly assist in military operations or using them to shield a military object or troops from attack, is prohibited under international law. The practice is also prohibited under Israeli law based on a 2005 ruling by the Israeli High Court of Justice.

Israel has repeatedly blamed the high civilian death toll in Gaza on Hamas, accusing them of using civilians as human shields. Human rights groups and journalist have found no evidence to support the claim. The mere presence of Palestinian armed group members among the civilian population does not rise to the standard under international law.

During the six-week long bombardment of the Gaza Strip, over 2,000 Palestinians, most of them civilians and including more than 460 children, have lost their lives. On the Israeli side, 67 people have died, of whom 64 were soldiers.

The high Palestinian death toll has provoked outrage among the international community, with UN Secretary-General Ban Ki-moon strongly condemning the loss of Palestinian lives. Despite this, however, international attempts to broker a sustained ceasefire and reach a solution through negotiations in Egypt have failed. Violence returned to Gaza on Wednesday as Palestinian groups renewed rocket fire, and Israel retaliated with over 60 airstrikes.

Ahmad, like all Gazans, is living in a state of instability and violence once again. Remembering his ordeal, he said, "I lived through fear, terror, ate disgusting food, could not sleep normally, was not treated like a human being, was shot at, ordered to walk in front of the soldiers, forced to search for tunnels and dig in a well at noon, not to mention being insulted, humiliated and interrogated every day." 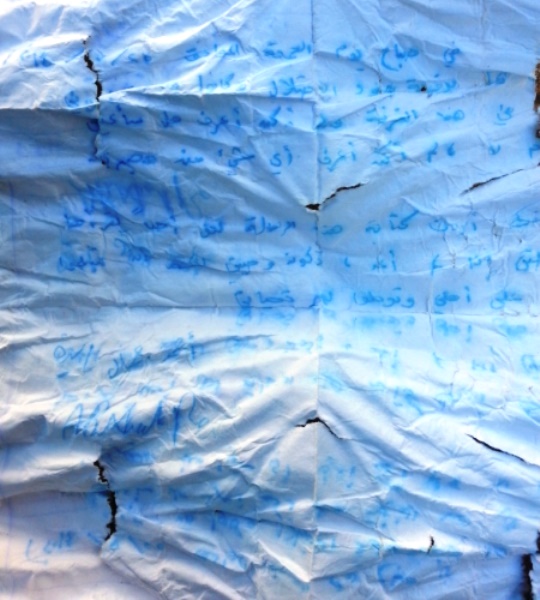 Ahmad Abu Raida found a notepad and a pen in one of the homes he was forced to search by Israeli soldiers. Worried he'd never see his family again, he wrote the following: "I spent Friday, July 25, with Israel occupation soldiers who locked me in this room. I do not know whether I am going to live or they are going to kill me. I do not know anything about what might happen next to me. I am writing this letter hoping someone would find it and inform my family about it. In case I die or get arrested, please send my greetings to my family. Ahmad Jamal Abu Raida."