Ramallah, July 1, 2021—Israeli settlers shot and injured two Palestinian boys during an attack on a Palestinian village in the northern occupied West Bank in mid-May.

Israeli settlers from the Jewish-only Yitzhar settlement shot and injured two 17-year-old Palestinian boys, Shadi S. and Mahmoud S.*, around 2 p.m. on May 14 during a settler attack in the occupied West Bank village of Urif, located south of Nablus, according to documentation collected by Defense for Children International - Palestine. Dozens of Israeli settlers from the Yitzhar settlement, accompanied and protected by Israeli forces, attacked Palestinian residents and their homes with stones and live ammunition.

“Israeli settlers perpetrate violence, damage, and destroy Palestinian property, take over land, and commit other grave offenses against Palestinian civilians living in the occupied West Bank,” said Ayed Abu Eqtaish Accountability Program director at DCIP. “In this hyper-militarized environment, without a semblance of accountability for wrongdoing, disproportionate violence is inflicted on Palestinian children with impunity.”

A Palestinian adult, Nedal Safadi, 31, was shot and killed during the attack, and seven others were wounded with live ammunition, according to Middle East Eye and documentation collected by DCIP.

“When I arrived, there were clashes between the Palestinian village residents and a large group of Israeli soldiers and settlers, who were firing live bullets towards the residents,” he told DCIP.

About 10 minutes later, Mahmoud, was observing the clashes when a settler, who Mahmoud identified as a security guard at Yitzhar named Yakov, pointed his gun at the residents from a distance of about 60 meters (196 feet). Yakov shot Mahmoud in his left leg as he was turning around to flee. The bullet hit the back of Mahmoud’s left calf and exited out from the front without hitting the bone, according to documentation collected by DCIP.

“I heard a gunshot and felt something hit my left leg. I fell to the ground, and young men carried me 50 meters (164 feet) away, and put me in a private car while I was bleeding,” Mahmoud told DCIP.

Mahmoud was taken to Ibn Sina Health Center in the nearby town of Huwwara and received first aid treatment. Then, an ambulance transferred him to Evangelical hospital in Nablus. He was hospitalized for one day.

Shadi S., 17, was shot in his shoulder during the same attack on Urif.

“I turned around to escape, but I felt something hit my right shoulder. Some guys carried me when they saw my shoulder bleeding heavily,” Shadi recounted to DCIP.

Shadi was taken by private car to Huwwara health center, where he received first aid treatment and an ambulance transferred him to the Women’s Union hospital in Nablus, according to information collected by DCIP.

Doctors operated on Shadi and removed shrapnel from his right shoulder. Doctors reported that the bullet hit the shoulder bone and reached his chest, with the fragments spreading in his chest. Shadi stayed at the hospital for four days and still requires medication and regular checkups.

Urif is a village 13 km (8 miles) located south of Nablus. Yitzhar settlement is located about 500 (1640 feet) meters to the north of the village. Yitzhar is widely known as a hotbed of Israeli settler violence against Palestinians. The illegal settlement was founded in 1983 as a military outpost that soon turned into a civilian settlement. Nearby Palestinian villages previously used the land for agricultural purposes, and Palestinian villagers are frequently targeted with violence by Yitzhar settlers. The Od Yosef Chai yeshiva is based in Yitzhar and is known for encouraging its students to perpetrate violence against Palestinians. The yeshiva was previously located in Nablus until it moved to Yitzhar in 2000 during the Second Intifada. 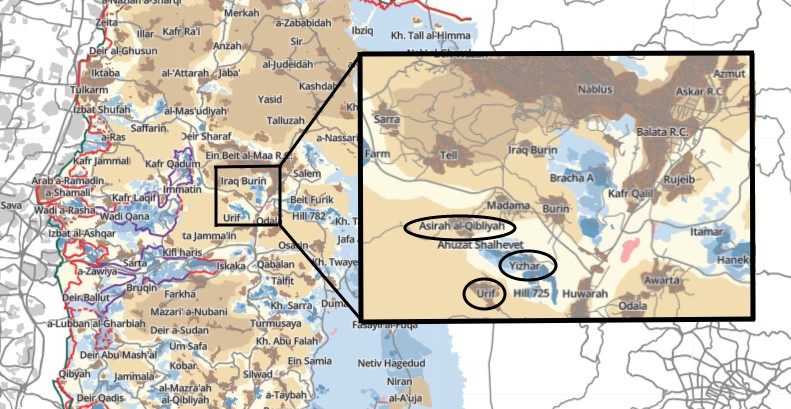 Two days after the attack on Urif, dozens of Israeli settlers from Yitzhar, attacked Palestinian residents and homes in Asira Al-Qibliya, a Palestinian village located four miles southwest of Nablus. Israeli settlers entered the village around midnight on May 16, threw stones at Palestinian houses and attempted to set them on fire, according to information collected by DCIP.

“My six-year-old daughter was panicking and screaming ‘I don’t want to die,’” Majdi M. told DCIP, as he recounted the Israeli settler attack on his home in Asira Al-Qibliya. “It was 12:30 a.m., and we were sleeping when the Israeli settlers attacked our village with stones.”

Majdi, and his wife, Isra’, and their six-year-old daughter, Sandy, were all sleeping in the same room, a precaution they take in case settlers attack the village, to ensure their daughter is protected. Shortly after midnight, the family was awakened by their neighbors shouting that settlers were targeting the village.

“I opened the door and saw around 30 masked settlers about 30 meters (98 feet) away. They were accompanied by two heavily armed soldiers.”

Majdi returned inside and gathered with his family in the living room in the middle of the house, away from the windows to protect themselves in case settlers broke the windows or threw flaming objects through them.

“They focused on the window of the guest room overlooking the street, and then I saw flames just outside the window, my wife and daughter screamed even harder.” Majdi added.

The attack lasted for a couple of minutes before the villagers managed to force the settlers out of the village. At that point, Israeli forces shot live ammunition and threw tear gas canisters to disperse the villagers.

Since this incident took place, Majdi and his family have been staying at his in-laws’ home in the center of Asira Al-Qibliya where settlers are less likely to attack.

“My daughter is still struggling. She has nightmares and cannot sleep at night. She has also developed bedwetting problems. She often wakes up panicking and screaming, ‘a settler is choking me.’”

*Mahmoud's name has been changed to protect his privacy and safety.