Israeli soldiers use excessive force in night-time arrest of teen 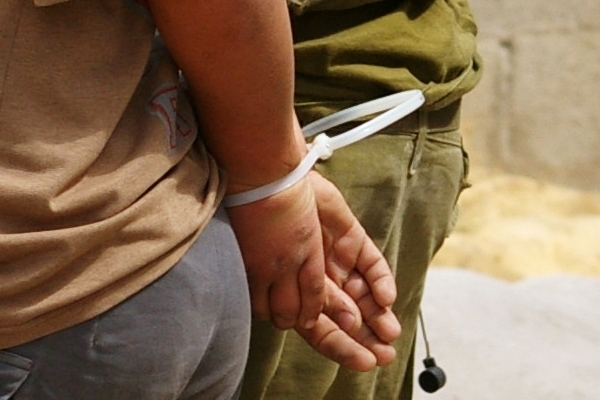 Image depicts the use of a single plastic hand tie commonly used by Israeli forces to restrain a child during an arrest, often causing pain.

Ramallah, 28 March 2013—Israeli soldiers used excessive force while arresting a teenage boy in a predawn raid on his home Monday in the West Bank town of Beit Ur al-Tahta.

Dragged out of bed to the front yard, Jaber O, 15, wound up shoved to the ground, then kicked and punched multiple times by the soldiers, his mother, Fatima, who witnessed the arrest, told DCI-Palestine. Jaber trembled and cried when three dogs brought by the soldiers surrounded him, she said. The soldiers tied his hands behind his back and blindfolded him before putting him in a military jeep.

DCI-Palestine confirmed he was being held at the Mascobiyya jail in West Jerusalem. In 2012, Jaber spent nine months in prison for stone-throwing.

“Night-time home arrests by heavily-armed soldiers can result in serious ramifications for children,” said Ayed Abu Eqtaish, Accountability Program director at DCI-Palestine. “When combined with the widespread ill-treatment of children in the Israeli military detention system during the first 48 hours, such arrests raise serious concerns about a child’s physical and mental health.”

Dozens of Israeli soldiers raided the home around 1 am, asking specifically for Jaber, his family said. They searched the property for several hours, causing extensive damage in the process. “When I asked why they were damaging my house, one of the soldiers said they were following their orders,” said Fatima. During this time, Jaber was kept outside in the cold without adequate clothing.

Out of 139 sworn affidavits collected by DCI-Palestine during 2012, 50 percent of Palestinian children reported being arrested between midnight and dawn by Israeli forces, while 79 percent reported suffering some form of physical violence during arrest, transfer or interrogation. A report entitled “Bound, Blindfolded and Convicted” released by DCI-Palestine in 2012, found that terrifying night-time raids have enduring psychological impact on children.

While there are no specific safeguards under international law that regulate the times at which a child can be arrested, DCI-Palestine recommends issuing a summons to appear at a police station during the day as a practical alternative to arresting children late at night.