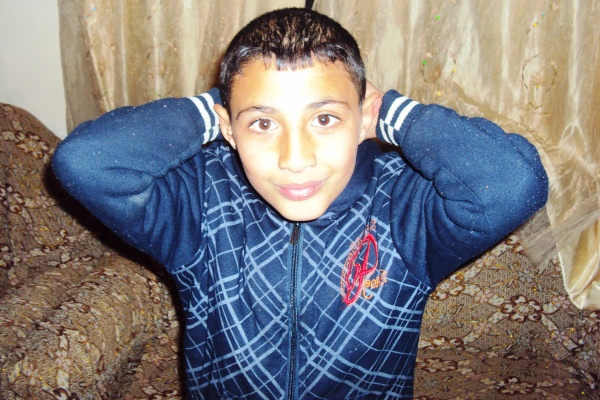 Ramallah, 26 February 2013—Israeli soldiers forced a young Palestinian boy at gunpoint to walk among them while they confronted Palestinian demonstrators near Ofer prison outside Ramallah on February 17, Defence for Children International Palestine confirmed today.

Around midday, Mustafa Wahdan, 9, told DCI-Palestine that he was on his way home from his older brother’s car wash service, approximately 300 meters (1000 feet) from Ofer checkpoint, when clashes intensified, forcing him to take shelter in a nearby store. Israeli soldiers saw him enter the shop and rushed after him. They detained Mustafa, ordering him to raise his hands behind his head, and allegedly used him as a human shield for several hours while they fired teargas canisters and rubber bullets at stone-throwing protesters.

“Whenever they wanted to fire teargas or shoot bullets at the protesters, they would take me with them,” said Mustafa. “I was really scared that a stone might hit me or something.”

Mustafa said that one of the soldiers kept his rifle pointed at his back throughout the experience. He was finally let go when his father arrived at the scene and pleaded with the soldiers for his son’s release.

“At home, Mustafa was still very scared,” said Mohammad Wahdan, Mustafa’s father. “He was silent and did not have his dinner. In the morning, my wife told me that Mustafa was shaking while he was sleeping. The following night, he wet himself.”

The use of human shields is prohibited by international humanitarian law, and involves the forced presence of civilians to shield an area or soldiers from harm or forcing civilians to directly assist in military operations. Since 2004, DCI-Palestine has documented 20 cases of Palestinian children used as human shields by Israeli forces, 19 of which occurred after the 2005 decision by the Israeli High Court of Justice prohibiting the practice under Israeli domestic law.

“We are deeply concerned by the continued use of Palestinian children as human shields,” said Ayed Abu Eqtaish, Accountability Program Director at DCI-Palestine. “Israeli forces continue to blatantly disregard international law, as well as their own domestic law. We demand that the Israeli authorities conduct a prompt, transparent and impartial investigation and hold the perpetrators accountable.”

Palestinians have held several demonstrations this month across the Occupied Palestinian Territory in support of four Palestinian prisoners on an extended hunger strike. Clashes between Palestinian youth and Israeli forces intensified this week following the death of detainee, Arafat Jaradat, amid allegations of torture.