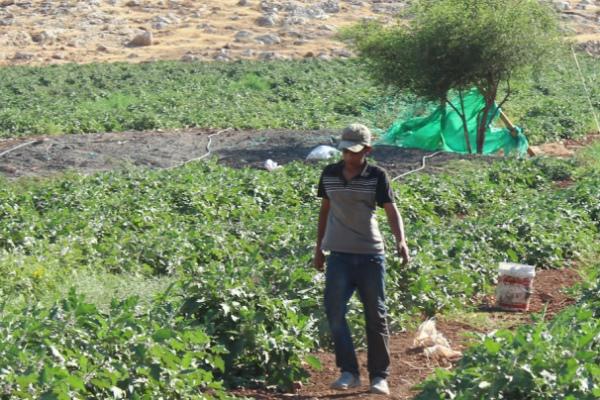 Fouzi, 16, works in the agricultural fields of the Israeli settlement of Hamra in the Jordan Valley region of the West Bank. (Dina Elmuti / DCI Palestine)

The Palestinian Authority prohibits children from working in Israeli settlements, and under Israeli law employing minors is illegal, resulting in a workforce that is invisible under the law and not guaranteed basic protections and rights, writes Dina Elmuti in The Daily Beast.

Ramallah, 31 August 2013­—The summer air grew considerably hotter as we drove down to the Jordan Valley. Its red fertile soil radiated heat beneath our feet as we walked toward the lush agricultural field dotted with young boys picking vegetables.

Wearing a red hoodie over his baseball cap, Omar, 17, quickly jumped off a tractor to greet us. He appeared thin and sun-burned and his hands felt calloused from picking vegetables bare-handed. Omar’s younger brother, Fouzi, 16, wearing a baseball cap and carrying his plastic bucket, followed close behind. Beads of sweat trickled down their faces as they proudly displayed the eggplants and peppers they had collected over the past five hours.

Four years ago, Omar became the primary breadwinner for his eight member family after his father passed away. In significant debt due to medical bills, Omar began picking, cleaning and packaging fruits and vegetables near the agricultural fields of the Israeli settlement of Hamra in the Jordan Valley.

When balancing work and school became exhausting, both Omar and Fouzi left school to work full time in the fields. Depending on the season, around 10,000 to 20,000 Palestinian laborers work in Israeli agricultural settlements in the Jordan Valley. Approximately five to 10 percent of these workers are child laborers, according to the Maan Development Center.

One of the most restricted places on earth, the Jordan Valley is home to vast swaths of rich agricultural land used by Israeli settlements. Since 1967, Israel has implemented systematic measures to ensure absolute control over the region, depriving Palestinians of their right to their own resources.

While Israeli settlers make up 13 percent of the population, they effectively control 86 percent of the land. The annual value of agricultural production in the Jordan Valley settlements is estimated at about $132.6 million, according to a report by the Palestinian human rights organization, Al Haq.

Omar and Fouzi are from the West Bank village of Duma, 13 miles southeast of Nablus. During the months they work, they stay in storage units near the Hamra settlement sleeping on tiny cots for months at a time.

"We work up to 10 hours or more and we don’t get many breaks to drink water and rest throughout the day," says Fouzi. "The units we sleep in are very cramped and humid; sometimes it feels like we’re choking, but we’re used to it."

At the end of each week, they send the money they earn home to their mother. Child laborers earn an average of 40 to 60 NIS ($12 to $18) per day. This is not even enough to buy a bag of flour to feed her family, Omar and Fouzi’s mother, Muntaha, says.

listen to ‘Palestinian children: The invisible workers of Israeli settlements’ on audioBoom

Child laborers can suffer from injuries and chronic pain due to long hours, poor working conditions and the harsh physical nature of the work. The use of inorganic pesticides and fertilizers is widespread and unregulated in the Jordan Valley, creating highly polluted runoff water with high levels of chemicals to which children are exposed.

Exposure to these chemicals can have grave long-term consequences including hormonal, renal and nervous system abnormalities, and cancer.

Palestinian child laborers are undocumented, meaning no records of their hours worked are kept. They are paid in cash so that there is no proof of them working on settlements, and they have no official status, health insurance, or rights as employees. Settlers that employ them are well aware of this.

"Last year, one boy fell off the tractor and injured his back. He’s nearly paralyzed and didn't have insurance so he can’t work," shares Omar, eyeing the tractor he was just riding.

Undocumented child laborers are more vulnerable to exploitation, fearful of complaining or exposing any rights abuse that may jeopardize their source of income and safety.

"Cases of sexual assault and abuse are very common in settlements," according to Amjad Jaber, director of the Palestinian Authority Ministry of Labor office in Jericho. "I hear horrific stories from many women and children, who are most vulnerable to the abuse.”

Limited vocational training or other alternatives forces many Palestinian families to turn to waseets. Families trust waseets to find work for their children in Israeli settlements. Many waseets were child laborers themselves.

Waseets generally take commissions from the wages of the child laborers they recruit. Some also collect fees for housing and transportation. Israeli settlers pay higher wages to waseets because their services make running the entire agricultural settlement enterprise affordable and profitable.

The Palestinian Authority prohibits children from working in the settlements, and under Israeli law employing minors is illegal, which results in a workforce that is invisible under the law and not guaranteed basic protections and rights.

“I view the use of child labor inside settlements as a form of human trafficking,” said Khaled Quzmar, an attorney at Defence for Children International Palestine, who was involved in drafting the Palestinian Labor Law that went into effect in 2000.

"Child labor is a very complicated issue," says Quzmar. "The fractured legal system in the West Bank makes it easy to exploit child labor because Palestinian Labor Law only applies to children working in areas under Palestinian Authority jurisdiction, not Israeli settlements."

Sitting down with Omar and Fouzi’s mother, Muntaha, in Duma, the sound of distress in her voice over her dependency on her children's work is clear.

"No mother wants to send her children to work in a settlement. Of course not," Muntaha sighs. "But what choice do we have?"

Dina Elmuti is a consultant with Defence for Children International Palestine. This article was originally published on The Daily Beast: