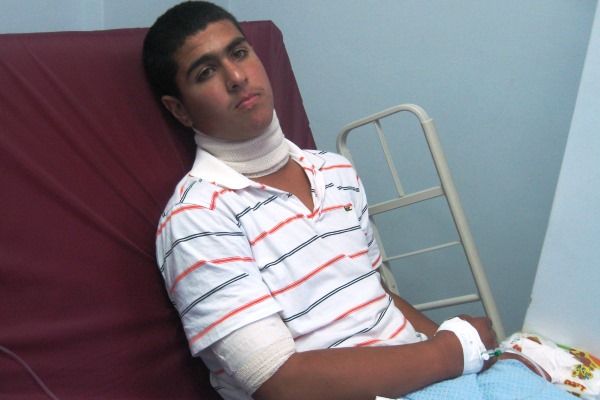 An Israeli soldier fired live bullets at Jihad Hamad, 14, injuring him in the neck and right shoulder, on Wednesday in the West Bank town of Silwad.

Ramallah, 25 July 2013­—Defence for Children International Palestine is disturbed by the shooting of a Palestinian child with dual American citizenship by an Israeli soldier in the West Bank town of Silwad on Wednesday.

Around 7 pm, an Israeli soldier fired live bullets at a small group of boys walking home near the main road in the western part of town, according to DCI-Palestine sources. Two bullets struck Jihad Hamad, 14, in the neck and right shoulder. One of the bullets also caused damage to his vocal chords. He was first rushed to an emergency clinic in Silwad, and later transferred to the Ramallah Medical Complex for treatment. His condition was described as stable.

"It is clear from incidents like this that some Israeli soldiers plainly view Palestinian kids as targets," said Ayed Abu Eqtaish, Accountability Program director. "Israeli soldiers are rarely held accountable for acts like this and the resulting impunity simply leads to increasing violence against Palestinian civilians, including children."

According to eyewitness reports, the situation was calm and the Israeli soldiers in the area were not in any danger that would allow the use of live ammunition.

The Israeli army’s open-fire regulations allow soldiers to use live ammunition “only under circumstances of real mortal danger,” according to a recent report by B’Tselem, an Israeli human rights group.

Despite these regulations, at least 21 children have been shot and injured by live ammunition, rubber-coated metal bullets or tear-gas canisters since January 2013, including two fatalities, according to evidence collected by DCI-Palestine.

In May, Atta Sabbah, 12, from Jalazoun refugee camp near Ramallah was shot by an Israeli soldier while trying to retrieve his school bag from another soldier nearby. The live bullet struck Atta in the stomach and exited through his back, severing his spinal cord and causing paralysis from the waist down. It also caused damage to his liver, lungs, pancreas and spleen.

DCI-Palestine documentation shows 32 percent of children were shot in the face or head, 18 percent in the arm or chest, and 14 percent in the stomach. One child was shot multiple times with live ammunition.

The majority of these children’s families have not filed any complaints to the Israeli authorities regarding injuries incurred through use of lethal or non-lethal weapons, as they do not believe there will be any criminal case brought against soldiers.

Since 2000, Yesh Din reports only five percent of complaints submitted to the Military Police Criminal Investigations Division lead to an indictment. Moreover, victims of soldier crime are reluctant to speak out “for fear they may come to harm, either for the soldiers who discover they filed a complaint or by the denial of various permits.”