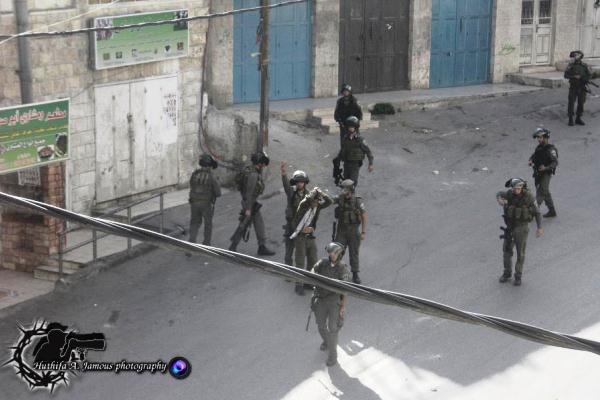 Muhammad R, 17, was used as a human shield by Israeli border police during clashes with protesters in the West Bank town of Abu Dis. (Photo courtesy of Huthifa Jamous)

Ramallah, June 4, 2013—Yanking him by the collar and shoving him in the neck, the armed Israeli soldiers proudly paraded the handcuffed teen up and down the street, making a public spectacle of him in the occupied West Bank town of Abu Dis.

Armed with live ammunition, rubber-coated metal bullets and tear gas, on Friday, April 19, at least 10 Israeli soldiers confronted the crowd of protesters using 17-year-old Muhammad Rabea as a human shield. They forced him to walk at gunpoint with his hands raised in the air as they approached the protesters.

Muhammad told Defence for Children International Palestine (DCI-Palestine) that he recalls inhaling the caustic smell of the tear gas, hearing the piercing sound of gunfire, and feeling the heat of the shell casings brush past his stomach as the soldier to his left opened fire at the crowd with live ammunition.

In October 2005, the Israeli High Court of Justice banned the use of Palestinian civilians as human shields. Failing to effectively implement the court’s decision, the soldiers also failed to realize their act was being captured and exposed. Video footage of the incident shows two soldiers flashing a V-for-victory sign before opening fire at the protesters.

Israeli border police spokesman Shai Hachimi told Agence France-Presse that the police officer in charge only wanted to show the youth was unharmed during his arrest. He denied that the teenager was used as a human shield.

Since 2004, DCI-Palestine has documented 21 cases of Israel’s use of Palestinian children as human shields. In breach of Israeli domestic law and international humanitarian law, Israel has continued to use Palestinian children as human shields with near complete impunity. In 2010, two Israeli soldiers, who used nine-year-old Majid Rabah as a human shield during Israel’s 2008-2009 invasion of Gaza, became the first and only so far to be charged and convicted of the crime.

Muhammad told DCI-Palestine that on the afternoon he was abducted he was walking to the supermarket, approximately 200 meters (660 feet) from his home, when he saw a group of youth running away and shouting that Israeli soldiers were chasing them. Unaware that there were any clashes taking place, he began to run as well. Moments later, two military jeeps advanced toward him and a voice from behind threatened to shoot him if he did not stop. A soldier caught him and forced him into a military jeep where he was bound and blindfolded.

Violating the UN Convention on the Rights of the Child, the Fourth Geneva Convention, and the UN Convention against Torture, Israeli soldiers and authorities subjected Muhammad to ill-treatment during arrest and interrogation. DCI-Palestine evidence shows that 75 percent of Palestinian children experience a systematic pattern of ill-treatment by the Israeli military, with the majority of abuse occurring during the first 48 hours.

Like other children who have been detained and tortured by Israeli forces, Muhammad shares a painful and unimaginable narrative. He points to his forehead where a soldier struck him with the stock of a rifle, at his legs where soldiers kicked him repeatedly, and at the base of his neck, wincing from the pain he still feels from being hit there with steel helmets.

He describes the verbal and physical abuse he was subjected to in the back of the military jeep during the forcible transfer to the military camp on the hill west of town. With his hands restrained by two plastic cords digging into his skin, soldiers forced him to sit on a revolving chair that spun as the jeep moved, giving them easier access to kick him from all sides.

After reaching the camp, the soldiers dragged him out of the jeep and knocked him down on the ground. “I couldn’t see anything but I remember feeling pain everywhere,” he said. “One of them hit me on my head with his helmet.” Muhammad screamed in pain and begged the soldiers to stop, but they began beating him harder for at least 10 minutes.

It was at this point that the soldiers took him back to town where he found himself in the midst of clashes. At gunpoint, soldiers forced Muhammad to walk among them as they confronted the demonstrators and opened fire in their direction.

After a few moments, he was shoved into the jeep where he was blindfolded and transferred back to the military camp. “One of the soldiers sprayed the keffiyeh (scarf) I was wearing with pepper spray before tying it tightly over my eyes, burning them,” he says. “Each time I coughed, he told me to shut up and kicked me. I wasn’t allowed to cough.”

At the military camp, soldiers forced him to stand facing a metal pole. Muhammad said the soldiers ripped his jacket and searched him, while an army dog clawed his back and calves. Following the search, soldiers knocked him down on the ground where he laid for two hours in pain as they continued to kick him in his legs, back and stomach. One of the soldiers removed the keffiyeh over his eyes and poured gasoline on it, burning it in front of him. The soldiers re-blindfolded him with a black piece of cloth and continued to hit him on the head with their helmets.

Muhammad struggled to stand for long due to the pain in his right leg, but the soldiers continued the ill-treatment by confining him in a sewage disposal system where he stood for over half an hour, blindfolded and bound. Muhammad remembers hearing the sound of a steel door slammed shut before he was caged in suffocating silence.

Following his confinement, Israeli border police transferred Muhammad to the Maale Adumim police station for interrogation. Upon arrival, he was taken to a room where he was fingerprinted, weighed and photographed. Still bound, he was taken to the interrogation room where he was accused of throwing stones. Muhammad’s father told DCI-Palestine that when he arrived at the station, he was allowed to enter the interrogation room with his son on the condition that he remained silent the entire time.

Israeli authorities gave Muhammad a confession document written in Hebrew, which he refused to sign. DCI-Palestine evidence shows that children are often shown and forced to sign documents written in Hebrew, a language the overwhelming majority do not understand. In 31 percent of cases in the West Bank and East Jerusalem, children provided a confession at the end of a coercive interrogation in 2012, according to Ayed Abu Eqtaish, Accountability Program director at DCI-Palestine.

Following a lengthy interrogation, Muhammad was later given a letter reprinted in Arabic. Due to his state of mental and physical exhaustion, he reluctantly signed the confession to halt the interrogation. At no point was Muhammad told of his right to remain silent or right to have an attorney present.

Muhammad’s father notified the Israeli authorities that Muhammad has enlarged tonsils and adenoids that restrict his breathing and require medication, which he brought with him in a bag. Muhammad told DCI-Palestine that he saw a soldier throw the bag of medication out the window shortly after his father left. After nearly two days of beatings and interrogation, Muhammad was allowed one cup of water to drink, which he was forced to fill himself as he remained handcuffed.

After questioning, Muhammad was transferred to Ofer prison where he was detained in a room with 10 other children for 21 days. During his detention, he faced five court hearings and was released from prison on May 9. He is currently awaiting trial.

Less than a month following his release, Muhammad appears visibly shaken by the abuse and trauma he sustained. His ribs are bruised and the invisible wounds he carries remain open and raw. He worries about being unable to concentrate on his studies and scoring well on his Tawjihi exam next year. This secondary education certification exam determines the future for many Palestinians.

“I just can’t remember things the way I used to before it happened,” he states in a subdued tone. He continues to suffer from a throbbing headache and a constricting feeling in his chest that interfere with his sleep and daily activities. Muhammad’s father provided DCI field researchers with medical records and documentation.

The look of apprehension and despair on his parent’s faces echoes his pain. “He wakes up jolted in the middle of the night, screaming,” says his mother. The haunting images and memories replay in his mind disrupting his schoolwork and mental stability, according to the psychological evaluation given to him by Al Marfa Mental Health Association.

The frequent raids on Abu Dis by Israeli soldiers create a source of anxiety for Muhammad, considering he could face up to a three year suspended sentence and fine if he is caught anywhere near clashes or engaging in any resistance activity.

“He’s afraid to walk to school,” says his father, “so I take him every day, but he’s still afraid they [Israeli forces] will come for him.”

Dina Elmuti volunteers with the Accountability Program at Defence for Children International Palestine. This article was originally published in Mondoweiss: http://mondoweiss.net/2013/06/palestinian-describes-israeli.html.